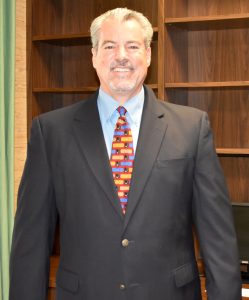 Dr. Raymond James has been serving patients in the area for more than two decades, and since March he’s been treating patients at the Boca Grande Health Clinic.

He officially started as a physician at the island clinic on March 1, 2018.

The doctor comes to Boca Grande from Englewood Community Hospital, where he served as the director of emergency medicine for 10 years.

Prior to that, he held the positions of medical director and emergency medicine physician at Fawcett Memorial Hospital in Port Charlotte.

Throughout his medical career, Dr. James has held a number of leadership roles and has provided more than 21 years of volunteer service within his community and abroad. He is a graduate of Des Moines University College of Osteopathic Medicine. He completed his residency at Metropolitan Hospital, Grand Rapids, Michigan and is board certified in emergency medicine.

Dr. James grew up in Auburndale, Florida, a city in Polk County.

He met his wife, Kathy, in 1988, when he was a second-year medical school student. She had just finished pharmacy school, and they were both attending a conference at Eli Lilly and Company in Indianapolis.

“We actually met while we were standing in line for lunch,” he said. “And here we are 30 years later – it’s been a wonderful journey.”

Dr. James and Kathy were married in Minneapolis (where Kathy is from) the day after he graduated from medical school.

He completed his first year of residency in Largo, Florida.

She was working as a pharmacist in St. Petersburg when he accepted a position in Lansing, Michigan.

“I took her from the warmest place in the nation to the cloudiest, coldest place,” he said.

They lived in Lansing for about a year, and then Dr. James finished his residency in emergency medicine in Grand Rapids.

“At the time I also had an interest in orthopedics,” he said. “It was very intense and challenging, but I got to learn about everything, which was great.”

After completing his residency in Michigan, they moved back to Florida in 1996.

“I promised my wife that once I’d finished my training, I would work wherever she wanted to live.”

He found a good match with Fawcett Hospital in Port Charlotte.

“It was a smaller hospital with a group of independent doctors, and I saw the kind of loyalty they had for each other, and that was the kind of practice I wanted to be a part of moving forward into my career.”

So Ray and Kathy moved to Port Charlotte in 1996 with their two-week-old son, Jonathan.

After about six months, they found a home on the water in Englewood.

Through his years of service, Dr. James recognized there are many people in the community who just cannot afford health insurance. And nine years ago, he decided to do something about it.

While he was working as a physician with Gulf Coast Emergency Physicians, Inc., he started up a dialogue with Dr. Mark Asperilla and Dr. David Klein about the uninsured, and together they initiated the concept for the Englewood Community Care Clinic. The goal was to provide free medical treatment for those without health insurance.

Dr. Asperilla and Dr. Klein are the founders of the St. Vincent DePaul Community Clinic, Inc., which is now the Virginia B. Andes Volunteer Clinic in Port Charlotte.

The free clinic has had more than 7,000 visits in the last seven years, treating nearly 3,000 patients.

“We’re very blessed to have some of the best doctors in the area,” Dr. James said. “We’ve talked about expanding services, because we know there are many young, healthy couples in the community who are choosing to go without coverage because of the cost. And the long-term problems that can eventually happen from avoiding medical treatment can be irreversible.”

Dr. James said the physicians at the clinic focus on wellness, starting with prevention, then treatment and follow-up.

“We want to have conversations that promote options for people to live healthier lives,” he said. “It’s not just about medications, but lifestyle changes and natural products that can help with certain ailments.”

The idea was to help people before they are forced to deal with long-term medical issues.

“At our monthly meeting, we’d talk about how preventive medicine could help so many people before they end up in emergency medicine. Hard-working people are avoiding medical treatment because they are afraid of the costs.

Christian Health Ministries was designed to be a zero overhead healthcare delivery system.

Volunteer doctors picked the towns they worked in and approached churches that were in underserved areas.

“I approached the First Alliance Church on Sunnybrook because I thought that was an area that needed service,” he said. “And they were more than happy to help us get volunteers from the church.”

He brought in nurses and paramedics to do screenings, and parishioners helped out with clerical support, and together they served the community.

For the next several years, he would spend two days each month helping the working poor.

“That worked out really well to a point, but challenges arose when a month went by before we could see the patients again – and that’s not frequent enough if you’re just starting a new medication.”

Dr. James has been treating patients at the Englewood Community Care Clinic since he founded the organization in 2011 with Dr. Asperilla and Dr. Klein.

They followed the format of the Virginia B. Andes Clinic in Port Charlotte, but on a smaller scale.

“We wanted to be able to treat patients two times per week for continuity and better follow-up,” he said.

Every physician he approached was on board, and so were the nurses. Each volunteer comes from 5 p.m. to 8 p.m. once a month.

Restaurants from the Englewood area send dinner for the volunteers, since most of them are coming straight from their regular jobs to help more patients.

The clinic serves residents of Charlotte and Sarasota Counties who are 18 to 64 years old.

A new building is currently being constructed on the property that will provide 1,000 square feet of additional space. Construction is expected to be finished by this summer. The new facility will also include basic dental services.

“The patients are so appreciative, and that’s what makes it so rewarding.”

Ray and Kathy have four children. Jonathan is completing undergraduate studies at the University of Southern Florida; Ashley is a sophomore at University of Florida in Gainesville; and Savannah, 16, and Alexandra, 13, attend Pine View school in Sarasota.

When he is not working, Dr. James enjoys boating, fishing and snorkeling with his family. They also enjoy taking road trips to explore national parks.

He and Kathy also are high-performance track drivers. “We’re both master instructors at Porsche Club North America,” he said. “We enjoy the sport and are happy to share our knowledge of safe racing with other enthusiasts.”

One of his favorite things to do on the island is to set up a couple of chairs on the beach every evening, so he and Kathy can enjoy perfect Boca Grande sunsets.