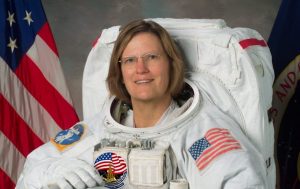 Kathryn (Kathy) Sullivan, retired NASA astronaut and former Under Secretary of Commerce for Oceans and Atmosphere of the National Oceanic and Atmospheric Administration (NOAA) is coming to Boca Grande as part of the Boca Grande Historical Society’s 25th anniversary lecture series.

Kathy recently published a book, “Handprints on Hubble,” explaining in vivid detail the work involved in inventing the tools and processes that made on-orbit maintenance possible. Without these inventions the repairs of the defects in the Hubble mirrors would not have been possible.

Kathy will share her experiences working with NASA, her memories of space walks, and stories about the Hubble Space Telescope and the early beginnings of her passion for outer space at 4:30 p.m. on Wednesday, Dec. 11 at the Boca Grande Community Center Auditorium.

She’ll also be speaking to the students at The Island School earlier that day. This will be her first time visiting Boca Grande. Hearing that Dr. Sullivan had committed to meeting with students during her visit, a Boca Grande couple made a contribution to enable Island School parents to attend Dr. Sullivan’s lecture on Wednesday, Dec. 11.

The first American woman to walk in space on October 11, 1984, she’ll recount her experience as part of the team of engineers, scientists and other astronauts who launched, rescued, repaired and maintained the Hubble Space Telescope.

After graduating high school in Los Angeles, California, Kathy earned a bachelor of science in earth sciences from the University of California, Santa Cruz in 1973, and a Ph.D in geology from Dalhousie University in 1978.

During her freshman year in college, she took several courses that covered marine science that prompted an interest in oceanography for a while, but she soon refocused her interest on studying the stars.

Kathy had just graduated high school when Neil Armstrong walked on the moon.

“The entire mission mesmerized me – it was such an immense adventure, and the people involved in it all were clearly super-smart and exuded an impressive cool,” she said.

When asked if she felt it was extraordinary difficult to break through the gender barrier in a predominantly male field, she replied “I never saw what I was doing as breaking barriers, just exploring and striving to fulfill my individual potential.”

Boca Grande Historical Society Board member Whitty Ransome was instrumental in getting Kathy to speak in Boca Grande. She reached out to her publicist (Molly Grote of MIT Press) and made the request. It took several months of planning and organizing to solidify a date for the presentation. Grote’s grandparents lived in Englewood and she was familiar with Boca Grande.

“I was thrilled to be invited by Whitty from the Historical Society and I’m looking forward to visiting the island,” Kathy said.

A reception and book-signing event for the general public will be held in the Community Center Woman’s Room after the presentation and her book will be available for purchase.

When asked what precipitated the creation of the book, she said she wanted to fill an overlooked chapter in the Hubble telescope’s history.

“I thought it was important to give proper credit to the unsung engineers (mainly at Lockheed and NASA) who had the foresight and skills to make Hubble maintenance and who designed and built the necessary hardware,” she said. “Writing it was more revelatory than cathartic; I reconnected with former colleagues, learned about their backgrounds and what they experienced in the years we worked together.”

Kathy grew up in New Jersey, and was intrigued by the stars from young age.

“I dimly recall going out into our front yard with my father to watch Sputnik go overhead in 1957 (I would have just turned 6) and chose a book about rocket flight for a second grade reading project,” she said. “I learned about ‘escape velocity’ from that book and was dazzled by the fact that there was such a thing.”

In her book, Kathy chronicles her early life as a “Sputnik Baby,” and her path to NASA as one of the “35 new guys.” She was also one of the first six women to describe in detail what liftoff feels like inside a spacecraft, which she compared to “being in an earthquake.”

She flew on three space shuttle missions during her 15-year NASA tenure, including the 1990 mission that deployed the Hubble Space Telescope.

She said the most profound experience she recalls while working with the space program is looking back at earth from orbit.”

Kathy performed the first extra-vehicular activity (EVA) by an American woman during Space Shuttle Challenger mission STS-41-G along with mission specialist David Leestma. They performed a 3.5-hour space walk in which they operated a system designed to show that a satellite could be refueled in orbit. During their eight-day mission, the crew deployed the Earth Radiation Budget Satellite, conducted scientific observations of the earth using radar and a large format camera, conducted a satellite refueling demonstration with the Orbital Refueling System (ORS) and conducted numerous in-cabin experiments.

Astronauts-in-training are warned in advance that roughly half of a crew will suffer nausea in space due to the effects of zero-gravity. The other will remain nausea-free. Kathy wasn’t sure which category she would fall into until her first mission. She recalls that when the engines cut off, the very first thought that went through her mind was, “This is way too much fun to get sick over.”

Kathy is an inductee into the Astronaut Hall of Fame. Since leaving NASA, she’s held a variety of senior executive positions, including presidential appointments to the National Science Board and chief scientist of the National Oceanic and Atmospheric Administration.

The former spacewoman holds a bachelor degree in earth sciences from the University of California at Santa Cruz, and a Ph.D. in geology from Dalhousie University in Nova Scotia, Canada. She was recognized as one of the 46 distinguished “First Women” by Time Magazine in 2017, and Time’s “Most Influential People” in 2014.

In 1988, Kathy joined the U.S. Naval Reserve as an oceanography officer, retiring with the rank of captain in 2006. She left NASA in 1993 after flying on three space shuttle missions and logging 532 hours in space.

Tickets for the event are $35 for  Historical Society members and $60 for non-members and can be purchased by calling (941) 964-1600 or via the website at bocagrandehistoricalsociety.com/events/space-odyssey or at the history center. Patron tickets are $150.