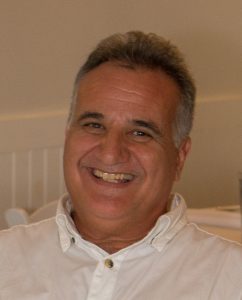 BY MARCY SHORTUSE – Bruce Rougraff is a self-proclaimed beach bum from way back. When he was a child, living in Houston, his family would head to the Galveston Bay beach almost every weekend, and some of his fondest memories are of those trips. Those memories, and those of going to the beaches of Southwest Florida, were the impetus for a book he has written called “Doubloon,” which will be made available locally.

In the book a boy named Tommy, his brother Auggie and his sister Fran visit a barrier island in this area (Bruce said it may or may not be Boca Grande) with a dream to find buried treasure. When it actually happens, Tommy realizes he has unlocked a 200-year-old mystery.

It was a dream that Bruce had as a child, to find buried treasure. For as far as his memories go back, he remembers fondly his time on the beach, building sand castles, swimming, fishing, watching wildlife and dreaming.

So how is it, then, that Bruce, an orthopedic surgeon, ended up spending so many years in a landlocked place like Indianapolis?

“My dad was a physician, and my mom took care of six kids and worked as a medical worker,” Bruce said. “He transferred to Indianapolis when I graduated from high school in Houston, so I went to Indiana University in Bloomington, and got the rest of my schooling at IU. I did some fellowships away from there, in Chicago and Italy, but I’ve been in Indianapolis for years.”

He has authored more than 50 published articles and numerous abstracts, given more than 80 national and international presentations, and serves as a course lecturer for the American Academy of Orthopedic Surgeons. He has also been the recipient of several research awards and grants.

Bruce and his wife Rebecca have four children – Olivia, Mitchell, Kaleigh and Audra, all living near Bruce and Rebecca in the Midwest. Bruce also has one grandchild and another on the way.

The first time Bruce heard anything about Boca Grande, it was through his sister-in-law, who always mentioned the island in conversation. She had come here as a child, and the magic never faded for her. Bruce first came on spring break in 1980, and he loved the west side of Florida. They come down as often as they can, usually five or six times a year.

“We bought a place in Boca Grande about 12 years ago and come down about six times a year,” Bruce said. “I absolutely love Southwest Florida – it’s gorgeous.”

Bruce’s love of Florida, its beaches, its wildlife and its mystery are all very prevalent in his writing in Doubloon. He said that when he showed the book to a family member, he got the response he was seeking.

“I think the coolest part of the book is the description of the animals and the sunsets,” he said. “My brother-in-law read the book and told me he got teary-eyed. He said he felt like he was a 9-year-old boy on the beach. I told him that’s exactly what I was going for.”

The story’s protagonist, Tommy, has many interactions with local wildlife, including many with ospreys and manatees. This spring break trip to Florida he takes with his family is his first vacation ever, and it is everything he could have dreamed it to be.

Bruce said it was written primarily for children 8- to 12-years old, but many younger children love it as well: His daughter Kaleigh, who is a kindergarten teacher, read it to her class in Ohio, and it was a big hit.

At 218 pages, it is a chapter book – 24 in all. It is written from Tommy’s first-person perspective.

Tommy’s sister Fran is quite the antagonist, and she frequently gives Tommy a hard time. Bruce said it was fun writing in the first person, as he could once again look at the world through a child’s eyes.

“Being a little naïve, there are many things described in the book through Tommy’s eyes that adults will understand, but he doesn’t get,” Bruce said. “A lot of kids will be able to identify well with Tommy, because he’s a real kid. For instance, he isn’t good at English, he doesn’t like to read, and the teachers don’t really like him because he’s a bad student. His sister, though, is, and she puts him down for it. I’m hoping it can appeal to boys who don’t normally like to read, to read a story about a boy who doesn’t like to read.”

Bruce said the idea for the book was originally just for fun, to read to his grandkids. 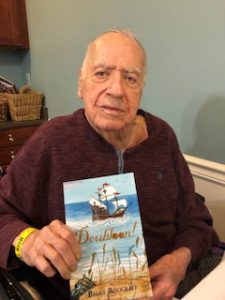 “It took off from there,” he said. “I was really excited to go through the process and really get it published. When I showed it to my dad, he almost cried. He is almost 94 now, and his whole life he always wanted to write books and never did.”

Other family members were involved in the creation of this book as well. When Olivia was home from nursing school, Bruce asked her to do the inside illustrations for the book. Rebecca illustrated the cover.

Bruce said he was stunned when he did some research and realized how many books in that age genre were written for girls, or from a girl’s perspective.

“Quite frankly, most books are written for girls because many people think that girls read and boys don’t,” Bruce said. “There is clearly a bias that way. At the time when I was looking for boy’s adventure books, there was not much to choose from. I thought if I ever had the time, that’s what I would do.”

“There’s a weird coin that is cursed and a mystery,” he said. “ Some of the experiences Tommy has are things that happened to me, and some are things that happened to people I know. There also may be a cameo in there, but the fact is, when Tommy’s brother breaks his arm in the middle of the book and has to go see an orthopedic surgeon, that’s not me. Only people who know me will realize which character I am … it’s a very subtle thing.

“It’s very interesting to me to see which parts of the book people respond to most. One woman read the book and was fascinated with the fact that I describe someone driving an Olds 442 from the 1960s. She was so excited because she had one once. One of girls in my daughter’s class said her favorite character was Fran, and I thought it was interesting that she liked the troublemaker. People like all different parts of it; it ‘s a fun book. I love people’s reactions to it.”

Bruce will be at The Tide Bookstore (inside the Old Theatre Building on Park Avenue, where Scarpa’s Coastal is located) on Saturday, Feb. 29 for a book signing.

It will be sold at that location and available for order on Amazon, as well as most online publishing companies. Stop by and see Bruce on February 29, and he might give you a little insight regarding the sequel to Doubloon, which will be called “Tarpon.”