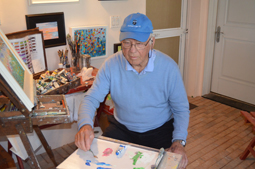 Dr. Bill Heisel’s home art studio in Boca Grande is filled with colorful oil paintings that line the walls of the room, while white canvases sitting on easels wait for fresh new paint to give them life.

Heisel has been painting for about eight years. Never previously having an interest in art, he took a class at the art alliance and was immediately hooked. His first painting was a simple barn scene.

“I had never done any kind of art before, so it was hard to break into it at first. I was lucky I had a good instructor to start with, who gave me some good tips,” he said.

He completed his first painting in a matter of hours.

“I was really careful with the first one. I practiced slowly, and I had a good model to use,” he said.

That encouraged him to try another one. And then he began experimenting with different styles.

Using a pallet knife in the shape of a flat arrow, he dips into a variety of acrylic paints and gently glides it across a new canvas. The bottom of the knife is not very sharp, but he also uses the tip to create a sharper look. And he uses a variety of brushes to add details to the paintings.

Bill said just replicating what you see isn’t actually creating art. He likes to give his paintings a personality by mixing various colors and shapes. Working from a smooth, white board filled with small piles of paint colors, the artist takes a dab of two or three different colors to create new and unique hues.

“These tools really make it much easier. If you can butter a piece of toast, you can paint,” he said. “People who have never painted before are often intimidated by the thought of the process when they see all the different sizes of brushes and colors. So, what do I do with a friend who wants to learn? We take a small canvas and use a general scene, like a sunset, and I lay out some basic colors like red, orange and white, and we paint it together,” Bill said.

He said there isn’t a lot of drawing involved, which is a good thing, because he doesn’t think he draws very well. He said as long as the final product has a focal point, it’s a good piece.

“There always should be something that brings your eye right to it and draw you in. Something should just jump out at you. But if it’s too busy, you’re going to lose your audience, so it’s a delicate process,” he said.

Bill also creates sculptures. His first art show was a display of pieces of his clay sculptures. He made a clay turtle and some other items to display at that show. He said he uses a new kind of clay that doesn’t require firing to dry it. Then after a few days he paints the pieces.

He started painting around that same time.

Bill was membership chairman at the Boca Grand Art Alliance for five years.

“I am glad to see the art center itself is doing so well now, because when I started they didn’t have much money, and their membership wasn’t really doing that well and needed some tweaking,” he said.

“Every mailing an art alliance sends out is very important and should project the right image,” he said.

He has been doing shows to the past few years. He enjoys painting in both modern and abstract adaptations.

Bill is originally from Walloon Lake, Michigan and still has a home there, where he and Pat live during the summer months.

He met Pat when he was a national championship oarsman at the Detroit Boat Club while he was in dental school. He spent three years on the Olympic Rowing Committee.

Bill and Pat have five children and 12 grandchildren who live in Michigan, Wisconsin and Indiana.

Bill doesn’t paint very much during the summer, since he stays so busy with the children and grandchildren.

He attended The University of Michigan and studied orthodontics. Upon graduation he immediately started a private practice with a colleague in Wyandotte, Mich. He worked at that practice for 35 years.

“It was really a blessing that I was able to do that. I was dead broke coming out of school, and one of the professors on the faculty offered me an opportunity to get a practice that he couldn’t service. So I was able to start right off with a bang. I got a fresh start and got to jump right in,” Bill said.

After retiring from a career in orthodontics, he and Pat were introduced to Boca Grande by some friends who had vacationed on the island.

“We loved it the first time we saw the island. We rented for about 14 years and then had a home built here,” Bill said.

Bill is an avid gardener up north, and many of his paintings reflect his love of plants and flowers.

His most recent work could be seen at the Art in Bloom 2016 Spring Show, which was held at the art center on the island. Members of the garden club brought one of his oil paintings to life by placing silk flowers in an iridescent Polish glass vase. It was a beautiful addition that was on display right next to his painting.

Bill said he doesn’t do much gardening here, because the soil is so different, but he does grow orchids here.

“They seem to do really well in this environment. I just stick them outside and let them fend for themselves, and they do just fine,” he said.

He said his gardening up north is also not very sophisticated. He just sticks certain plants in the ground and hopes that the deer won’t eat them.

Bill said that working with flowers helps him with ideas for paintings, because when you look at them you start thinking about colors and forms.

Keeping a healthy body along with a healthy mind, Bill enjoys a good round of morning golf several times per week, and he swims in the afternoon. Pat is an avid bridge player and is actively trying to learn the game.

He enjoys reading archeology magazines in his spare time.

His all-time favorite movie is “Casablanca.” He and some friends schedule regular cast parties, for which they dress up and play out the parts. He also has a book about how the movie was made, which stimulates for some good discussion at the parties.

“It is the most quoted movie for one-liners that has ever been produced – that and “Gone With The Wind” – they have the most memorable lines,” he said.

Bill also likes to cook. He has a variety of cookbooks at his home, and he can get a pretty good idea of a dish he would like to make just by looking at a picture of it.

“In orthodontics, we call it ‘visual treatment objective.’ You have to have a vision of where you want to go, and then you have to make a plan to get there.”

Bill said he enjoys sharing in good conversations with the people of Boca Grande. He also enjoys hearing a good homily at Father Carosella’s Sunday Mass.