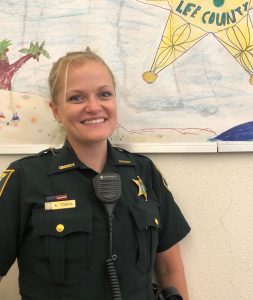 If you thought the flare of the island would stop with the cops, think again. When a certain squad car rolls by the Loose Caboose, you can see the glitter of a pink steering wheel cover.

Deputy April Tomyn is Boca Grande’s very first female sheriff of the Lee County Sheriffs. With a touch of pink personality, she is easy to spot.

Born and raised in Southwest Florida, April spent her childhood in the heart of Port Charlotte. She attended Charlotte High School before studying at Florida Atlantic University and Southwest Florida State College. Her bachelor’s degree in management gave her the background to take on a leadership role.

In 2005, she began to work with the Sheriff’s Office, despite the lack of support from her family.

“No one in my family is in law enforcement,” April said. “In all honesty, I went to college to be a teacher originally. I decided I didn’t want to do homework when I got home, so I changed my degree. Then I got hired by the Sherriff’s Office, and here I am now.”

Despite what April had in mind, she chose the path that felt right to her, and she saw a change of heart from her family.

“Throughout the years, from getting divorced to where I’m at now, my family has been amazing,” she said.

Through her time as a police officer, she has worked in a multitude of positions. Her time spent on the job in Lehigh Acres, on Pine Island and in Fort Myers has given her 15 years of both small town and city experience.

In 2008 April had her son. While it was a blessing to have a child, her job made it difficult to raise a baby, so took the position as a school resource officer. She stayed in that position for the first few years of his life, until she felt ready to tackle a few other positions.

Compared to her past experiences, her time on the island has made it to the top of her professional career list.

“The best part of my job has been working here,” said April. “You can’t deny the view.”

She has also found the Pink Pony to be a workplace plus.

“I feel the pressure of that place every once in a while, and I have to get my toasted coconut ice cream,” she laughed.

To her, the island is like no other place in the world.

“Out here it is a totally different world than anywhere else. I’m not chasing people; however, I have to be completely attentive,” said April. “And I always have to have a smile on my face. I work pretty much all of the time.”

She now cares for her son as well as three stepchildren, so her free time is devoted to their sports games and practices. She has to work around seven different sport practices.

“It takes a lot of caffeine, but I wouldn’t have it any other way,” she said.

With the little time that she does have to herself, April enjoys putting her hands to work on a Jeep project. She also loves to camp across the state of Florida, and often makes a few pitstops by the beaches.

Many people around the island have become fans of Deputy April since she became a full-time officer in July (she was part-time her for a time as well), and her co-workers enjoy her presence, too. She serves alongside Lt. Jeff Corkhill and Deputies Angelo Lanni and Chris Nebel, and the group monitors the town, beaches, and bordering waterways.

“April has been a great addition to this team,” said Jeff. “She came in and qualified for the ATV, boating, and bicycle.”

The community of Boca Grande has been one where she feels most relaxed and has enjoyed being able to connect with the people directly.

“That has helped me communicate better with everybody out here. I’ve always been personable. However, not having to be so stressed at work helps,” said Deputy April. “A lot of people like seeing a female out here.”

That’s part of what makes her a likable figure to the town, as she gives a sense of comfort by her personality alone.

Even though she never became a teacher, April feels a connection to The Island School students, especially since the Sheriff’s Office is but a few  feet away from the school. As a gift to her, the fourth and fifth grade students even drew a large picture, depicting the school and a fisherman out on the water underneath the statement, “Proud to Serve.” The artwork rests just behind April’s side of the office, located in the Boca Grande Community Center. 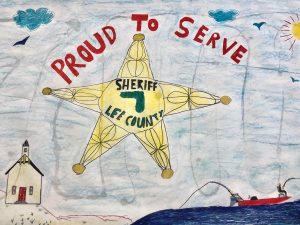 April takes pride in serving for Lee County. Her dedication to the Sheriff’s Office has rewarded her with a lifetime connection to the seaside town.

“The moment I go over the bridge, it’s a different feeling. It puts me in my happy place.”