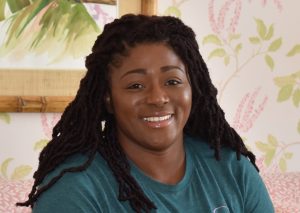 Dencina Ihlanberg is an amazingly strong woman – emotionally, physically and spiritually. Over a few short years she was forced to deal with a great amount of tragedy.

In 2003 she lost her father to cancer, and her older sister died from kidney failure. Her mother battled breast cancer in 2005 and passed away quickly.

“That all really affected me; it was very tragic,” Dencina said. “It was a lot to understand, and instead of accepting it I just buried my feelings. I was more attentive to the emotional needs of my
siblings.”

Her father was a preacher and nurtured her to be caring and supportive when others needed a shoulder to lean on or a helping hand.

“My father taught me to be strong and gave me the gift of trusting my religion as my main source of strength,” she said.

But there was one more unexpected catastrophe that life would throw her way.

She was working at a Texaco gas station in Nassau, Bahamas when the manager told her there was a phone call that she needed to take. She knew it was probably bad news, because her family and friends would always call her cell phone number, not the business line at work.

Her husband Richard was working on a fishing boat near Cat Key, and there had been a terrible accident and he was unable to be resuscitated. Dencina was left with two small babies to raise on her own.

“I had no other choice but to forget about how I felt and just push forward,” she said. “There was no time to recover. I had to be strong.”

She found a job as an administrative assistant and service advisor at an automotive dealership and tried to move on with her life.

But she knew she needed a fresh start and decided to leave her heartache behind. She moved to North Port to live with a relative in 2009. She quickly found a job as a caregiver, and one of her clients lived in Boca Grande.

“I was really close with the families I cared for … I take care of people with my heart.”

Like many others, it didn’t take long for Dencina to fall in love with the island. She knew she wanted to spend more time here so she could enjoy the peace and tranquility, and she began looking for a full-time job in Boca Grande. One afternoon she bumped into an employee at The Gasparilla Inn, who encouraged her to apply for a position opening. She originally applied for a housekeeping position, but management knew she was far more qualified and offered her a position at the front desk. She also worked in the retail store for a while, assisting the retail manager. When the position of concierge became available, Dencina was a natural fit. She’s held the position of full-time concierge manager at The Inn for the past four years.

“Everyone here knew that’s where my heart was, and I am very happy to have this position,” she said. “I really enjoy taking care of people. It’s not the same as working in the healthcare field, but I am still helping people and families. It’s rewarding, and I get to help people create memorable moments. And I put my heart into it … I really love what I do.”

Born and raised in Andros, Bahamas, Dencina said she had a very good childhood filled with wonderful memories. She was extremely close to her father, and she’d be at his side holding his bible every week during church services.

“As a small child I would carry his bible before he would minister to the congregation,” Dencina said. “My siblings and I would sing before the services, but I was the one to always gleam at his feet. I took on all of his attributes and characteristics, and I became that for my family when he passed on. Somebody needed to take his place.”

Her entire family still lives in the Bahamas. Her sister, Ethlyn Seymour, and her family recently lost everything when Hurricane Dorian slammed into Abaco Island, leaving her family with nothing more than a little food and a backpack carrying some clothes. Fortunately, after five days they were able to make their way to Nassau, where there was food and lodging.

When she received the first call from her sister asking to come help get them out of there, she couldn’t eat or sleep for days. She hired a private plane to try to go get them, but Marsh Harbor Airport was closed for six days after the storm.

Dencina has several other family members in Freeport who have all been accounted for and are just trying to recover day by day.

“My entire bloodline is on those islands,” she said. “I thank God each day they are all safe. They really don’t know what they’re going to do. People in Nassau are all still trying to figure out what direction they are going in. They are at a standstill. My sisters lost their jobs.”

Dencina talks to her sister every evening and keeps in touch with all her family via social media. She plans on going to visit them, hopefully in December.

“We try our best to keep each other updated as much as possible. ”There are no jobs there … it’s going to be a long time before things get rebuilt. There are other islands they can go to, but there is no development, so you can’t provide for your family.”

The concierge position is a perfect fit for her at The Inn. She is friendly, outgoing and very accommodating. The Gasparilla Inn’s annual open house is scheduled for Wednesday, October 2. Stop in and say hello to Dencina if you plan on attending the event.