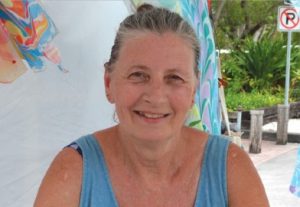 Debbie Hagstrom creates beautifully designed one of a kind silk scarves right in front of her customers. The artist visited Boca Grande in June. She was one of the vendors at the annual Boca Grande Invitational Art Festival that takes place in town each year.

This was her second time visiting the island. She attended an Englewood art festival two years ago where she met local artist Carroll Swayze, who invited her to partake in the festival in 2018 and again this year.

The concept is called Ebru and is derived from a Turkish art form that dates back to the 19th century where people created book bindings and leather goods.

Some of the scarves she made while visiting the island had a beach theme, and others were colorful creations of swirls and patterns. Each scarf is unique. They sold for $29 at the art festival.

Those browsing through the booths and tents at the art festival could catch a glance of Debbie making a scarf every so often.

Using oils and a six-foot long plastic tub containing water and chemicals, Debbie asked each of her customers what colors and specific patterns they would like in their new scarves.

The process takes less than five or six minutes. Once the dyes are added to the water, Debbie takes a small piece of plastic about the size of a straw and swirls the colors together to design a pattern. She then takes a six-foot long piece of silk and slowly drags it across the top of the water, where the scarf absorbs the colors.

“I use a plant based solution and basically the paint floats to the service,” Debbie said. “Then I give my customer a stick to mix the colors and she can create a pattern of her own.”

When you see a design you like, simply place to scarf on top and it immediately absorbs the colors. Then you rinse it and  let it dry, take it home and give it another quick rinse and it’s ready to wear later that day.

“The hardest part for people is picking the colors,” she said. “You can’t really plan for how the colors mix and what patterns will be created when you mix them.”

Some of the popular ones that sold at the Boca Grande art festival were starfish designs and other sea life themes.

Debbie said when she first started making the scarves, she mixed the water and too much methyl cellulose (a heat tolerant chemical compound that works as an emulsifier) and it wasn’t the right amount. She said she almost gave up on the project.

“I mixed like 80 pounds of chemicals wrong my first few tries and I kept getting it wrong … I almost quit, but then the next time it worked.”

It took her two weeks to get it right and that was just over two years ago.

Since then, she’s been traveling to art shows in her van all around the nation teaching people about her art.

She has participated in shows as far north as Chicago and Indianapolis, and covers the state of Florida from Tallahassee to Key West. She prefers two-day festivals because one is too short to set up and break down the booth, and three days have proven to be too exhausting.

Debbie currently lives in Ocala, FL, but she used to be a resident of Anna Maria Island, which is about 70 miles north or Boca Grande.

“I moved there in 1971 and it has changed so much over the years that I decided to move,” she said. “There are hardly any little cottages left on the island. Now people are building huge three story homes. It’s just not the same.”

She is originally from a town just outside of Atlanta, Georgia where she owned a horse and a small piece of land.

This is the second year Debbie has been invited to the Boca Grande Invitational Art Festival.

‘I did pretty well last year and I have actually been a little busier this year so I’m very happy to be here.”

Debbie also has paintings that she has done and she brings them to some of the shows, but she didn’t bring any to the Boca Grande festival.

“It gets tiring because most people say that although they like my work, they don’t have the wall space,” she said. “I am finding that scarves are a better seller because they are more unique and people get more use out of them, and they have a story to tell about how they got them.”

She made a few scarves with her daughter, Jill, when she went to visit her last summer.

“She hangs them out on the patio and they add a nice décor,” she said. “They will blow in the breeze on windy days. And when the sun comes out it almost looks like stained glass.”

Debbie does many shows in North Carolina during the summer months.

How she got involved in the scarf business is an interesting story. She was at an art show and was next to another artist who was retiring and wishing to sell the scarf business. After talking more and learning about the matter, she worked the last day of the show with him in Tallahassee and ended up buying the business that day.

Debbie started out as an artist while she was attending South Florida College. She actually wanted to teach art therapy, but there was a four-year internship that would have worn her out physically and financially, so she found a job as a picture framer at an art gallery. She was able to sell her fused glass items in the gallery, and she eventually decided she would rather travel and partake in art shows around the country.

The artist said the process is similar to the art of paper marbling, a method of aqueous surface design, which can produce patterns similar to smooth marble or other kinds of stone. The patterns are the result of color floated on either plain water or other solutions. The liquid is then carefully transferred to an absorbent surface, such as paper or fabric.

She purchases large potions of silk from various international wholesalers, but the said prices have really gone up this year due to the new tariff laws.

Through several centuries, people have applied marbled materials to a variety of surfaces. It is often used as a writing surface for calligraphy, and especially book covers and endpapers in bookbinding and stationery. Part

of its appeal is that each print is a unique monotype.

Debbie also teaches classes where a group of women come to make the scarfs and enjoy wine and cheese during the process.

She hopes to return to Boca Grande next season and teach a class on scarf making at the community center.

The samples she makes that are on display at the art shows are always available for purchase.