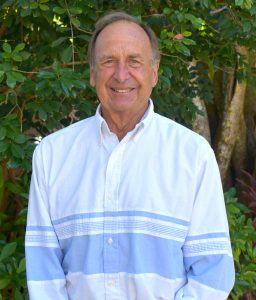 In 2018, David wrote a book called “Burying Pinkie Pie,” a story about a teenager who is dealing with the antics of life in a setting similar to Boca Grande. The protagonist is a 17-year-old boy named Wendell Wolf. Wendell is new to Florida’s Banyan Island, and he launches a plot to rescue the corpse of Pinkie Pie, the 350-pound pig in which resides the spirit of the dearly departed grandmother of Samantha Granger, Wendell’s first girlfriend. Although it was written from the perspective of a 17-year-old male, audiences of all ages have enjoyed the book.

David recently released the sequel to “Burying Pinkie Pie,” entitled “What Carlos Knew.” It is a continuation of the same characters, but now Wendell and Samantha are on a rowdy new adventure. A bizarre religious cult of Hollywood celebrities is out to steal the Calusa Indians’ island in the Florida Everglades, and it’s up to Sam to stop them. She’ll do it with the help of a geriatric motorcycle gang, a bucket of concentrated dope oil and Carlos, a wise little dog who gets his mojo by sipping at the fabled Fountain of Youth.

Sparks was motivated to write the sequel shortly after finishing “Burying Pinkie Pie.” It took him about 18 months to complete.

Like the first book, he asked several friends and colleagues to read a draft of the new book and share their opinions.

“I think it’s important to get feedback from teenagers, because that’s the age of the main characters,” Sparks said.

His cousin is an English teacher, and several of her students helped out with the research for the book. Some of the ladies at the Boca Bay Pass Club also read the book and passed it along to kids they knew.

The book also has another island connection – the writing illustrations in the book were created by Elizabeth Schum, daughter of Boca Beacon publishers Dusty and Cheryl Hopkins.

“I wanted them to appear as if they were written by a teenager, and she did a great job,” Sparks said.

He’s always been a fan of serial young-adult books, which inspired him to write the two novels.

“Harry Potter books are like crossover books – both kids and adults enjoy them – and they are appropriate for all audiences, so that’s what inspired me to write “Pinky Pie.”

Artist Brendan Coudal, who produced the posters for the annual Boca Grande Ladies Day Tarpon Tournaments for many years, created the cover of the book. 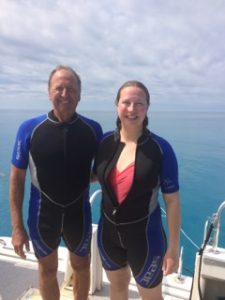 Both books are available on Amazon.com.

Sparks published his first book in 2017.

“Built to Fail” is based on events he experienced throughout his government and political career. He served as regional director for the Federal Emergency Management Agency and investigated a case that never was closed. Years ago, a Massachusetts congressmanturned-developer got away with arson and fraud on a massive scale. In the book, the character is back for more. He’s built a wind-energy project … and rigged it to fail.

Sparks said it was a pretty complex book to compose, but since he knew the characters, setting and the plot before he wrote the book, it made the process easier.

“I think many people who are retired have an idea for a book in their mind that they want to write, like a chronicle of their history, and that’s what ‘Built to Fail’ was for me.”

David grew up in Danville, Illinois, which is about 100 miles south of Chicago. His family moved to Massachusetts when he was in high school.

“I had the best of both worlds – a Midwestern childhood, and then I spent my young-adult years in the Northeast, which gave me access to the East Coast’s big cities.”

He became involved in politics in Massachusetts at an early age. He studied political science at Tufts University in Boston and was involved with several political campaigns after finishing college. He was a volunteer for several congressional campaigns when he was in college, and after graduating, he ran for the legislature of Massachusetts.

By that time he was bitten by the political bug, and he pursued his passion to possess a political career.

He earned a graduate degree in public administration at The John F. Kennedy School of Government at Harvard University. It was then that he realized he enjoyed working on campaigns rather than being the one running.

“I’m good at public management, but I really didn’t want to be the front person,” he said.

David ran the Ford presidential campaign, and then he ran a successful congressional campaign for Maine Representative Olympia Snowe – the youngest Republican ever elected to Congress.

From there he moved to Washington D.C. and became the national field director for George H. W. Bush. He directed all of the state caucus campaigns in 1980. Bush had become Reagan’s Vice President at that point.

After that, David became the New England regional director of FEMA.

Following that position, he worked for the governor of Maine and then moved back to Washington and worked on H.W. Bush’s presidential campaign in 1987 and 1988.

After that election, David worked for a large political consulting firm. There was a great need for public affairs specialists at that time.

He had a private consulting company for many years before deciding to retire and move to Boca Grande permanently in 2012.

“I love this island. The first time I came here I knew I wanted to live here,” he said.

His former’s wife’s mother had a home here, but that’s not how David was introduced to the island. His connection started much earlier.

Growing up in Danville, his parents knew Dr. David Dorsey, one of the founders of the Boca Grande Health Clinic, so his parents had been visiting the island for years.

David has a daughter, Grace, who lives in Washington, D.C. and works for CNN.

“She just had two well-researched political polling articles posted on the website,” David said. “She was a psychology major in college, and one summer she worked for a friend of mine in Washington who was a Republican pollster, and she really enjoyed the work. I’m very proud of her.”

When David is not working, he enjoys playing tennis, cycling the Cape Haze Pioneer Trail and creative writing.

“I always have a story in my mind at all times,” he said. “And being retired, I can write almost anywhere and anytime. I try to write in the morning for a couple of hours every day.”

He said he wouldn’t want to live anywhere else but right here in Southwest Florida.

“I really love this community – it’s a unique place,” he said. “I also am a member at the Boca Grande Pass Club, and it’s another wonderful community to be connected with …  the people are just incredible.”

If you know of a business or organization that would like to host a book-signing event, contact Sparks via email at davidsparks444@gmail.com.