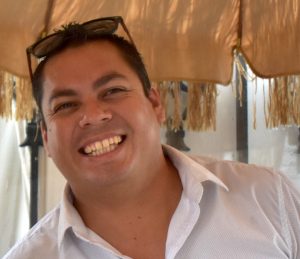 He’s been offering authentic, tasty Mexican cuisine on the island since 2015, starting out as a vendor at the Boca Grande Farm & Fish Market. Since joining the Pink Pony team, David Mota has gained an even larger number of loyal customers.

As of Tuesday, June 18, 2019, owners of the Pink Pony officially gave the reins of their kitchen to David, creator of the new kitchen concept and the name, “Tortuga: Mexican Street Cuisine.”

The idea was to open during the summer months so he could test out menu items and see what customers liked best.

“My concept is to keep the menu simple and keep it fresh every day,” David said.

Many people on the island are familiar with the authentic tacos, tamales and guacamole that David serves at lunchtime, but the new breakfast items have attracted new customers. While huevos rancheros and avocado toast are popular items, customers can also order “eggs your way” with a variety of toppings and sautéed potatoes, peppers and onions for breakfast.

Breakfast is served for $7, and that includes a drink. Lunch is $8, and there are six options to choose from. A soft drink or water is included as well. Just tell David (or his half-sister, Kateri, who helps serve up the food every day) just how spicy or mild you want your order.

Regular customers will also find surprise specials like grouper tacos, which were on the menu board on a recent Friday. That special went over very well, and David is thinking of having regular fish taco Fridays in the future.

The Spanish word “tortuga” translates to turtle in English.

“I thought it would be very fitting for the island, since sea turtles are very popular here,” David said.

“Tortuga Mexican Street Cuisine” is the brainchild of Pink Pony Owners Julie Camp and Ken Heimann Sr., and Jr., as well as David. Many Island residents, visitors and workers were already very familiar with David’s authentic Mexican food from since he began his adventure on the island back in 2015. He started at the market by himself, selling fresh guacamole, pico de gallo and shrimp ceviche. Over the years his following grew due to loyal customers. Year after year, regular customers and new ones have grown the business, and David has enlisted the help of several team members.

In May, 2018, he collaborated with the Pink Pony owners, and taco Tuesdays in the courtyard became a weekly tradition. With some help from Kateri, his daughter Moizelle and niece Monet, it proved to be a recipe for a great atmosphere.

When the Pink Pony owners realized they were ready for a change, David in the kitchen was the obvious choice. Customers are still able to buy ice cream, sundaes, shakes, smoothies, cold and hot drinks and other treats from the Pink Pony, but the kitchen now strictly offers authentic Mexican street cuisine.

Guests can order food at the walk-up window (designed to look like a food truck) and can choose to either take orders to go or enjoy the freshly remodeled courtyard. Julie and Ken’s niece, Nikki Heimann, will also be helping out in the kitchen this summer.

“Nikki is great,” David said. “She’s a very hard worker, and she personally knows many of the customers, which is nice.”

Another benefit David and Kateri are enjoying in the new location is the comfort of air conditioning. Although they had large fans and worked in a shaded area at their former location, this new benefit is much appreciated, especially since the hottest days of summer are still ahead.

If you’ve ordered lunch from David before, you know just how friendly and enthusiastic he is about his business. “I love making food, but I really love talking to the people every day,” David said. “I try to serve everybody as fast as I can, and I work hard to make sure that quality food is served as quickly as possible.”

David has three brothers, and he found out about his half-sister, Kateri, about four years ago.

Kateri grew up in New York, and the two found each other through an ancestry DNA search. They were both actually living in Florida when they discovered the news. “I’ve been living here for 14 years,” Kateri said. “I was so surprised and lucky to find out I have him as a brother. It was just surreal.”

They decided to meet at Englewood Beach, where David was running (and still owns and operates) a smoothie stand. The business operates out of an old Volkswagen bus, and friends run it daily since David is on the island full-time now. Fresh fruit, all-natural smoothies are sold near the children’s playground area.

David plans to continue being a part of the Boca Grande Farm & Fish Market next season. Kateri will be working the farm markets this year.

“It’s one of those things that when you jump into it, you have to keep the commitment,” David said. “And I have a deep commitment to Boca Grande.”

Originally from a small town outside of Puebla, Mexico, David was raised by a single mother who loved to cook homemade meals. She may not have realized it, but ever since he was about seven or eight, he started watching what kind of ingredients she would add to certain recipes, and he noticed early on what spices made certain foods taste better. When he attended neighborhood parties and tasted other dishes, he realized how much better his mother’s and grandmother’s food tasted.

“The flavor just wasn’t there – it was not nearly as good.”

People in the neighborhood agreed, and they often hired his mother to cook at their family parties.

“I suggested that she open a restaurant, but she never wanted to do that,” he said. His mother still lives in Mexico and has visited Florida several times. David visits her regularly, and he’s looking forward to going later this year and bringing his daughter for the first time.

David moved to Madison, Wisconsin when he was 13 years old. Two of his brothers lived there, so they helped him get acclimated when he came to the United States.

After graduating from high school, David held jobs at the front of the house at several restaurants, greeting customers and taking reservations. His bilingual language skills and friendly personality made it pretty easy to find work. But what he really wanted to be doing was cooking.

The entrepreneur moved to Englewood in 2014. He and his former wife wanted to move to Florida and live near the water, so they found a place online and moved down with their daughter, Moizelle, seven. She currently attends a Montessori School in Venice. Moizelle also helps out at the restaurant once in a while when she comes to the island with David.

“If she likes the business that would be great, but it’s one of those things that time will tell,” David said.

After moving here and getting settled in, David visited the Boca Grande farmers market and knew right away it was something he wanted to get involved with.

“I always have been interested in working with food,” David said. “In Wisconsin I wanted to open a food truck, but that didn’t happen.”

He knew he wanted to serve the same kind of authentic food that he grew up with, and use the same recipes his mother used. He started doing research while he was living in Wisconsin to understand the best way to reach his goal. He would make different dishes and invite friends over to try them, and they’d anonymously vote on which ones they liked best. And that has proven to be a recipe for success.