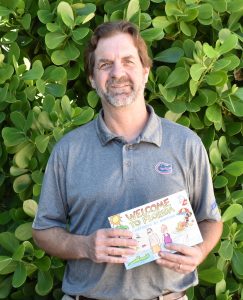 You may not know his name or recognize his face, but if you read the Boca Beacon on a regular basis, Dave Horton has most likely put a smirky grin on your face many times over the past 15 years.

Dave is the designer of the “Hortoon” cartoon that appears each week on page 6 of the newspaper.

He’s been crafting amusing cartoon drawings for newsprint since he was in high school, starting with his school newspaper, and even landing a deal with Hallmark when he was just a teenager. At the age of 15, he submitted a few ideas to the company, and to his surprise, one was chosen to be incorporated into a Charles Schulz

cartoon greeting card. Yes, you read that right — Charles Schulz — the creator of the famous Peanuts comic strips. He even had the opportunity to meet and golf with Schultz at an annual convention of the National Cartoonist Society, which he has been a member of for decades.

“It was summer in New York, and I explained to him that this was my first greeting card,” Dave said. “My peers were amazed because I heard he didn’t often sign things for people, but I guess he realized how important it was to me and he signed my original card.”

Originally from Kankakee, Illinois, Dave studied visual arts at Illinois State University after graduating from high school. He worked on the design of his college newspaper, and created a weekly cartoon strip called “Fubarfun” for the paper.

“It was about two college roommates who shared humorous stories about the college experience,” Dave said. “It won best cartoon strip for Illinois colleges. That was a big deal to me back then.”

Dave started out drawing on some letterhead that was in his dad’s office, and that’s what sparked his love for cartoons. He also collected comic books that inspired him to make up his own characters.

After graduating from college, he took an creative advertising position with the company Print Corp.

He also continued to do some work for Hallmark after college, submitting ideas that were eventually printed.

“I never expected that — that’s how I got involved in the greeting card business, he said. “I have stacks of ideas that I keep that I don’t think are good enough, but I hang on to them and revisit them now and again to see if I can make something better of them.”

Dave and his wife, Diane, moved to Florida from Illinois about 25 years ago.

They have two daughters: Nicole, 23 and Genevieve, 21. Nicole works in finance for Capital Bank in Chicago, and Genevieve attends the University of Florida. They also have a son, Alex, who is 15 and attends Fort Myers High School.

He ran that business for almost 15 years. The girls helped out with administrative duties and Diane ran the operational side of the business.

“She’s very organized and she gets things done.”

When the printing industry started to take a hit about ten years ago, he sold the business. But he still runs Sanibel Graphics in Fort Myers.

It takes up quite a bit of his time. There are several social media pages to maintain and a warehouse that houses T-shirts, magnets, postcards and other items that are ready to be shipped at any time when an order is placed on the Etsy site.

“I try to keep as much stock as possible at any given time,” Dave said.

His recent book, “Welcome To Florida” spawned another idea for a future business endeavor. The colorful book is filled with cartoons about southwest Florida. His publisher pointed out the fact that book was abbreviated to the acronym “WTF” — spinning Dave off in a new direction to create bumper stickers and flyers that simply state “WTF” in large print, and “Welcome to Florida” in smaller font just beneath the large capitol letters.

“They have been very popular,” Dave said. “We’re having fun with it.”

The Welcome to Florida book by Dave is literally a hoot. The cartoons are brilliant, zany and irreverent.

Picture a raccoon scrambling through a garbage can on a golf course where hungry gators eyeball golfers imagining them as tasty afternoon snack. And Dave keeps the drawings quite tropical, as turtles, birds, sharks and manatees are popular characters.

Florida today editorial cartoonist Jeff Parker said Horton is the Jimmy Buffet of the cartoon world, as stated as an endorsement on the back of his book.

Dave is a multi-talented artist who recently started another business called Nature Brackets Design Gallery. The main products are support brackets for mailboxes, porches and shelves.

He manufactures the pieces out of 1/2-inch durable PVC so the items are safe for both indoor and outdoor use.

You can view some of his work at naturebrackets.com or search for Hortoon! on Facebook.

Most recently, he is working on a contract with Home Depot to carry some of the items in its store. You can view some examples on the store website.

The items are manufactured in a flat white coating, and creative folks can even choose to paint them and give the brackets a personality of their own.

“Our components resist peeling and cracking because they do not absorb moisture,” Dave said. “The coastal designs are the ones that sell best.”

If you’d like to see some examples of them, take a drive around Sanibel Island where many of the homes with mailboxes are decorated with Dave’s sea creatures, popular birds of the area and nautical creations. He also had some special ones made for the holiday season that are available on Etsy.

When he’s not busy creating and running the two businesses, Dave enjoys golfing.

He said meeting the legendary “Peanuts” cartoonist Charles Schulz was truly a thrill.

“All the famous cartoonists were at the annual convention, and Charles was there when I went to my first one in New York,” Dave said. “I showed him the first card I ever did and he signed it, which was a pretty rare thing … I was told he didn’t sign his name on things other than his own work. And then we went golfing together. He was a great guy, very friendly. ”

Dave is the youngest of three children, his older siblings, Lee and Genevieve are twins. His parents currently live in Seattle, Washington.

“We have three very completely different personalities … just like my kids.”

The next endeavor on Dave’s list is hosting a show with his brother, Lee, called “Hortoonapalooza” which is scheduled to take place December 31 through January 29 at the Marco Island Center for the Arts.

“I’m going to have some original cartoon prints on watercolor paper that I have framed and we’re going to be doing some other fun stuff,” Dave said. “My brother is a painter and does sculptures so it should be an interesting show.”

The Marco Island Center for Arts is located at Winterberry Drive in Marco Island. Come and meet your local Boca Beacon cartoonist and check out some other hilarious paintings, zany mixed media and an array of original work.

If you are looking for a unique gift for that someone who may have everything, check out Hortoon! on Facebook.