Born in Newark, Daniel spent his childhood in the small community of Summit, New Jersey. He studied accounting and earned his bachelor’s degree in economics at Villanova University in 1965.

For the next three years, he studied at Rutgers Law School in New Jersey.

“For me, 1968 was a rather tumultuous year. I got out of law school, took the bar exam, and got married to my wife, Barbara, three days later,” said Daniel. “We went off for a couple of days for a honeymoon, and when we came back, my draft notice was waiting for me. By January I was in basic training. That week in July was pretty eventful.”

Once he got out of the service, Daniel returned to his clerkship to pursue his law career. “I met a fellow who had just left his position to take part in a busy national practice. He was looking for an associate, so I joined him in 1969 and we put together a good practice for about 12 years.”

Their practice consisted of employment law as representatives of the steel industry.

Later, Daniel landed a position as chief negotiator in New York City for the Iron League.

“I spent a lot of time as general counsel for Harris Steel, which is one of the two companies that built the Verrazzano-Narrows Bridge.”

He also spent a good deal of time as a construction representative in the city. In New Jersey, he also represented numerous trade associations on behalf of employer groups.

Daniel’s transition to bioethics came from his work on a controversial case regarding the right to die, centering on 21-year-old Karen Ann Quinlan in New Jersey. Daniel advised the original guardian and his former classmate, Dan Coburn, who appeared before Judge Muir.

“This later became a leading case in the drafting of legislation by the New Jersey Bioethics Commission, which I chaired at the request of Governor Thomas Kean in 1985,” said Daniel.

He chaired the commission until 1989.

As Daniel came to represent hospitals and healthcare systems, bioethics stuck as his subspecialty.

His firm soon expanded and merged with Shanley & Fisher. After Daniel became managing partner, the firm soon once again merged, this time with Drinker, Biddle & Reath in Philadelphia in 1999, allowing for a national practice.

After 12 years with the firm, Daniel decided to retire the briefcase.

Throughout his career he had been a visitor to Boca Grande.

In 1984, the O’Connells came to the island solely to buy their first place the next year. Daniel and Barbara now spend a good portion of their time in Boca as Florida residents. As a result of their newfound time, Larry Hannah asked for Daniel’s involvement with Gasparilla Island.

“I started to delve into what the Barrier Island Parks Society did and was blown away by the educational components, the caretaking of the Boca Grande Lighthouse and museum, the volunteers who protected the turtles and the education for kids,” Daniel said.

Daniel became a BIPS board member six years ago, around the time red tide became a prevalent problem. He currently serves as president of the organization.

“When red tide became a major issue a couple years ago, reaching out and partnering with Mote Marine was such a progressive move; bringing symposiums to the island to educate residents,” Daniel said. “It’s been an exciting experience as a part of BIPS and its evolution.”

Daniel is glad to be able to preserve the environment with the help of a generous community. “Sharon McKenzie is an incredible executive director. We’re blessed to have a great staff at BIPS. We were fast on our way to developing some good long-range plans,” said Daniel.

With this year’s “Bid for BIPS” regarding red tide, wildlife and water quality, the organization’s partnership came just in time for the Coronavirus pandemic to make waves.

“I must take my hat off to the Englewood Bank and to our treasurer, John Kissinger, for arranging for the payday loan so we are able to keep our full-time employees employed,” Daniel said.

Their verdict to postpone the annual Green Gala was a difficult decision. “Hopefully we’ll be able to reconvene and thank everyone for their generosity.”

Daniel recalls the organization’s acclimation has involved a few chaotic Zoom meetings and dicey choices regarding the reopening of local parks. As president of BIPS, he will continue to follow the Governor’s direction. Part of the reopening of local outdoor activities will require volunteers and rangers to be equipped with proper training and the right gear.

“It’s been a challenge stepping in for the pandemic,” said Daniel, “but the board members have been amazing at keeping us together and informed.”

When they aren’t soaking up the Florida sun or following their water aerobics schedule, Daniel and his wife work with their community’s soup kitchen in New Jersey.

They are also supporters of the Port Charlotte homeless coalition.

Up in New Jersey, their three-generational home is where their son-in-law spends his time jumping back and forth as an overnight TV director for CBS.

Every Sunday, the family gathers around their computer for a family Zoom reunion. Once every six weeks, they hold a meeting with extended family from across the nation.

Daniel and Barbara have two daughters, Melanie and Megan. One of their four grandchildren, Danny, has the support of the family regarding his life with autism.

“Danny is our glue, he is what keeps our whole extended family together,” said Daniel.

Daniel and his son-in-law are on the board of Danny’s school, Eden, in Princeton. Eden holds an annual run to raise money for their progressive school. From family members to peers, ‘Danny’s Blue Crew’ participates in the run each year to demonstrate their empathy for special needs children.

“I’ve been blessed in my life to be mentored by some incredible people,” he said. “As my good friend Bob Thompson says, ‘nobody’s a self-made man.’ ”

As Daniel envisioned a football stadium full of the people who got him where he is today, a particular mentor of his made it all worthwhile.

“Bernard Shanley was a baseball player for Columbia. Even though he worked as Deputy White House Chief of Staff alongside President Eisenhower, he was the most regular man you’d ever meet,” Daniel said. “He taught me lots of things to manage, know everyone’s name and their family.”

After 52 years of marriage with Barbara, Daniel owes his bliss in paradise to her support. “Barbara is my rock. She helps me every step of the way. That is my story and I’m stickin’ to it!” 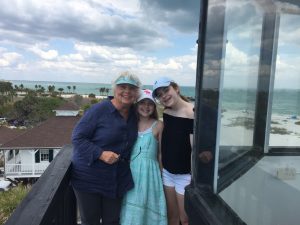