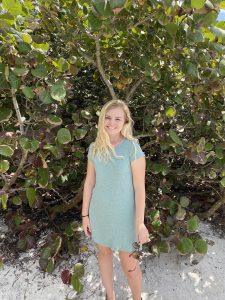 For her, happiness is a well-planned event…

BY OLIVIA CAMERON- Florida girl Courtney Clark is familiar with Boca Grande’s beaches. After spending most of her childhood in Southwest Florida, she’s devoted her time to local event planning.

Courtney was born in the town of Center Moriches, in Long Island, N.Y. and lived there until the age of five.

“I don’t remember much about my actual hometown, except we lived near the water so there were always a ton of swans,” said Courtney. “Even though they used to chase me around the yard, I missed them when I moved to Florida.”

When her family relocated to Florida, living by the water gave her a sense of home.

“When I moved to Florida, I was so happy that we were still near the water, because being on the water and the beach is my favorite thing,” said Courtney.

After graduating high school with her associate’s degree at Florida Southwestern State College, Courtney earned her Bachelor’s degree in psychology at The University of South Florida. 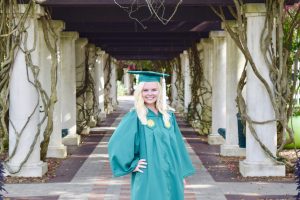 After many jobs in retail, Courtney cherished her time working as a USF tour guide prior to graduating. As a tour guide, Courtney was responsible for selling the idea of attending the university. The position required a lot of public speaking, and a need to memorize the campus. She also had to read the potential personal interests of each of the school’s prospects.

“I loved introducing prospective students and their families to the university,” she said.

Her tour experience has translated over to her newfound position on the island. Last August, a family friend mentioned an opening at The Gasparilla Inn & Club. After a few interviews, Courtney’s qualifications landed her a position as a sales and catering coordinator. Her personable attitude has made it easy to be a flexible event planner. The position involves the coordination of private dining functions, smaller weddings and other social events.

As a coordinator for The Inn, Courtney guides guests through their event concept, and assists in the process, to make sure each event is polished until it shines. From soup to nuts, so to speak, she monitors the entire planning procedure.

“My position entails walking people through the initial inquiry process, all the way until the end of their event,” said Courtney. “I meet with prospective guests, show them around The Inn, and talk to them about what I think would work well for them and their event. I help them to secure the venue, assist with food and beverage selections, setup decisions, and create a timeline so that things move smoothly on the day of the event. I think my background in psychology has really lent itself to benefiting me in a number of circumstances.”

Courtney appreciates the moment those puzzle pieces come together to create a beautiful picture. When the dust settles, the final outcome makes it all worth it.

“I often receive little bits of information here and there throughout the whole process, but my favorite part is when I finally put it all together and can see the finished product start to play out,” Courtney said. “I’ve worked on a number of dinners and cocktail parties to celebrate important milestones in people’s lives, but I’d have to say my favorite event that I worked on this year was for a non-profit organization that hosted a benefit dinner at the Beach Club.”

Regarding the successful turnout of the event, Courtney was glad to give back to a meaningful organization.

“These events are all so unique, based on what the guest wants,” said Courtney. “The joy in people’s faces as they celebrate important life events is the best part of my job.”

Teamwork comes in handy with her detail-oriented position.

“It is important to make sure everyone is on the same page, since so many people lend a hand in making one event run smoothly,” said Courtney.

Her previous experience in customer service and public speaking also aid her in what she’s able to accomplish today.

“It’s all about making the guest happy!” she said.

Courtney finds herself lucky to work just blocks from the beach. She was involved in the Garbage Grabbers initiative, a group organized by employees of The Inn. The initiative was designed to keep local shores squeaky-clean. The good news is the group only had to visit the beach for two cleanups before the sand was spotless.

“One of the wonderful things about this island is that people generally clean up after themselves,” said Courtney. “The natural beauty and small town feel of Boca Grande is what is most special to me.”

When she isn’t fine-tuning the details of a function or keeping the beaches clean, Courtney relaxes with a good book or a beach walk with her camera.

She also enjoys caring for her “babies” – Jada, a black Lab; Coco, a tan Chihuahua; and her cat, Callie. Jada is a rescue dog from the Suncoast Humane Society, Coco was adopted from the Animal Welfare League, and a friend of Courtney’s found Callie. “She was all by herself, malnourished and less than one pound, and since my friend couldn’t keep her, we took her in,” said Courtney. 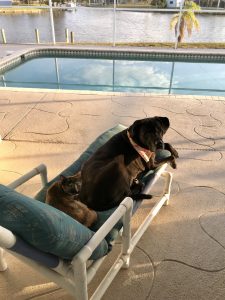 Through it all, Courtney has her mom to thank for giving her the perseverance she needed to succeed.

“She has been through a lot and always manages to come out victorious, which taught me to never give up,” Courtney said, proudly.

As she looks forward to an optimistic future, Courtney has, in part, the Florida sun to thank for making her days bright.

“My hope for the future is just ultimate happiness and success in whatever I do,” said Courtney. 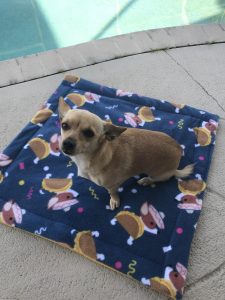