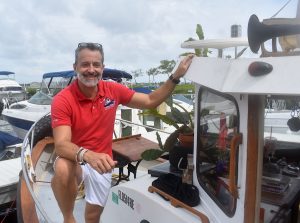 Capt. Christopher Robin is a former New Yorker who moved to Florida after finding a very special boat. Even though he had no nautical experience whatsoever, he knew the little abandoned tugboat was extraordinary.

“Little Toot” is Christopher Robin’s private mission to pay it forward by teaching children about hope, faith and possibility.

He formed a partnership with Lee County Schools to work with students and talk about his adventures both on the boat and dockside.

“It’s all about the children,” Robin said. “Little Toot teaches kids about the art of giving and being of service to others. He used to be a tugboat that helped other boats, but now he helps people.”

Christopher meets groups of students and summer camp kids regularly at a public marina in Fort Myers, where he keeps his boat.

He recently docked Little Toot at Boca Grande Marina and shared books and stories with summer camp students from The Island School. With a maximum speed of just six knots per hour, it took him 10 hours to get from Fort Myers to Boca Grande.

“At that speed, I generally use one gallon of diesel fuel per hour,” he said. “Kids are very environmentally aware these days, and they appreciate that fact when I share it with them.”

He has a partnership with the Lee County Library System and the summer reading program for kids to inspire and encourage youth to read more books over the summer months. He is offering the winning reader, along with his or her family, a private sunset dinner cruise aboard Little Toot.

Amy-Jane McWilliam, head of youth services for Lee County Libraries, said Christopher has been a valuable addition to the library program.

“He’s a very enthusiastic partner,” McWilliam said. “He is all about giving back to the community and never asks for anything back.”

McWilliam added that the librarians at Johann Fust Community Library on the island were instrumental is bringing Christopher to Boca Grande.

“Tony, Mary and Gladys worked with the staff at the Community Center, and they helped secure a dock space for Christopher to park Little Toot,” McWilliam said.

Little Toot has proven to be a survivor. When Hurricane Irma hit in 2017, the boat was at a marina in Alva, Fla. and Christopher had to walk through waist-deep water to get to the dock. The boats next to Little Toot all had damage, but Little Toot remained unscathed.

“Sometimes, and most often in my case, it’s the ‘rough waters of life’ lessons where I have learned the most,” he said. “It’s how we choose to navigate them that becomes the question and task at hand.”

Christopher’s parents live in Fort Myers, which is another reason he wanted to relocate to the area.

“They are getting older, and I wanted to create a special way for us to spend time together,” he said. “Tugboats are sturdy and slow, and that’s what I needed most at the time.”

Quite by chance but more likely by fate, Christopher discovered an old Crosby tugboat in a little red barn in Labelle, Florida – the inoperative “Little Toot.” He immediately felt he had to do something about it. He left his job in the corporate world of brand marketing to restore the vessel stem to stern. It’s now docked at the Edison-Ford Marina in Fort Myers.

“Several years ago I was in a very dark place, and when I saw this boat just sitting in that barn abandoned and without purpose, I felt a very strong connection,” he said. “The former owner was sick, and unable to take the boat out on the water any longer.”

Christopher came to Florida with the intention of enjoying a slower, more peaceful pace of life. He created Going Six Knots Foundation, Inc., in 2018. Dedicated to reading and storytelling, Christopher spends most of his days aboard the boat inspiring children and encouraging reading and learning.

It was immediate serendipity when he saw Little Toot. And yes – his real name is Christopher Robin, just like the character in Winnie-The-Pooh. The Little Toot character is from a children’s story written and illustrated by Hardie Gramatky, featuring a young tugboat in New York Harbor that does not want to tug.

Originally from Ohio, Christopher moved to New York after college and began a career in sports branding and marketing. He is also an artist who uses mixed media and the theme of forgotten beauty found. He discovers things that are lost and abandoned and then repurposes the objects. When he was visiting Cuba, he brought back a rustic chair that he bought from a local young man.

“My artwork has always been based on creating beauty out of what is lost and forgotten.”

And it’s not a tour boat – he is not for hire. He simply wants to give back to the community.

“Together with the Freedom Waters Foundation, we take kids with special needs, disabilities or other serious illness out on the water, which makes them (and their families) forget about their issues for a few hours,” he said. “Although we can’t cure them, we can help put a smile on their faces for a day.”

The captain enjoys giving out prizes and incentives for learning. Guests aboard Little Toot are given a lanyard with a whistle, light and compass.

“It’s a reminder that although they may get lost in life, they’ll always have tools to find their way home.”

His only request for guests on the boat is that they smile and wave to other boaters as they pass by, and stay positive and relax.

Christopher is also a photographer and an author who is working on a children’s book series, which is expected to come out later this year. The first book is an autobiography of a man, a tugboat and a chair. It’s about how they meet and what happens when you believe in yourself.

“My foundation is dedicated to bringing the power of reading, writing, art and storytelling to positively transform the lives of children growing up in a digital age,” Christopher said.

He is currently working on setting up cameras on the boat, so kids all over the world can watch his adventures on YouTube.

Christopher really enjoyed his time on the island and is looking forward to working with the library and the teachers at The Island School this fall.

“Visiting Boca for the first time was an affirmation for me about how there are so many unsung heroes in communities whose stories need to be told,” he said. “I love Boca Grande, and I can’t wait to come back. The library there is such a treasure – and Ms. Toni and Ms. Mary were such a pleasure to work with. I felt right at home as soon as we docked at the marina and walked up the steps to the library. I can’t even explain how incredible my first visit was … let’s just say endless smiles.”