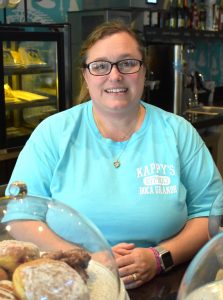 BY SUE ERWIN – Christi Legere has worked in Boca Grande ever since she graduated from high school. She found a job at Fugate’s and worked at the store for about two years, and eventually started working at PJ’s Seagrille, where she started out clearing tables.

She worked at PJ’s until the day the restaurant closed in June of this year.

“I was devastated,” she said. “I went home, and I didn’t know what to do next. It was like a family was broken apart.”

She was a server, a host, helped out in the kitchen and did a variety of other things during her two decades there.

“Whatever they needed me to do, I did it,” she said.

As fate would have it, she met Jill Kaplan (co-owner of Kappy’s Market and the new Kappy’s Downtown) a week after learning that PJ’s was closing. Christi’s husband, Rick, specializes in customized Jeeps, and Jill brought along her vehicle for him to take a look at and see what kinds of accessories he could order for it.

They started talking, and when Christi mentioned her current employment predicament, Jill offered her a job.

She had a meeting with the owners, Jill and Steve, and explained that she was still working at PJ’s and promised she would stay until the restaurant closed. They were happy to comply with the situation.

“I was off on Wednesdays and Sundays, so I would work at the north store until PJ’s closed,” Christi said. “Then they found out they were going to be opening a location in town, and now I work at the new store.”

Christi was born in Baltimore, Maryland and moved to Englewood with her family in 1984.

“I was 11 and was a new student at L.A. Ainger, and I just loved it,” she said. “My grandmother built a house in Englewood, and we would always vacation here, and my parents were ready to move.”

Christi and Rick have been married for almost 23 years. They have two children: Megan, 18 and Katie, eight.

Megan will be graduating from Lemon Bay High School this year and plans to study forensic science in the future. She currently works at the Boys & Girls Club in Englewood.

“It’s a perfect job for her, because she takes the bus there after school,” Christi said.

Like her dad, Megan is also into Jeeps. She drives one and goes to Jeep shows with him.

The family goes to an annual event called “Jeep Beach” every year in Daytona Beach. It’s a week-long event, and attendees can go to the Daytona Speedway and visit all the vendors that make Jeep accessories.

Rick has many contacts in the business, so he goes for the entire week and the girls come and join him for the weekend. “It’s a lot of fun to see all of the different kinds of Jeeps and check out the new ones every year,” Christi said. ”There are thousands there each year, and no two are the same.”

Christi said it was very interesting to be a part of the crew that opened a brand-new business on the island.

“The first couple of days were a little hectic, but almost everything went pretty smooth,” she said. “I’m excited. I love the store, and I’m really happy to be a part of this team. Diane and Chris are doing a wonderful job. Jill has done a beautiful job decorating, and Steve’s been very patient with all of us.”

The soup, salads and sandwiches are made fresh at the story daily, and there are also subs available that are made in the larger store at the north end of the island.

“For the space we have here, I think it’s being utilized very efficiently.”

Christi has been diligent about opening the store at 7 a.m. every day and said breakfast has been very popular.

“We alternate the breakfast bowls with a quiche or a strata, and we have breakfast sandwiches every day,” she said. “And the muffins have been a hit, we sold out the first day and had to make more. And we have yogurt parfaits with fresh fruit that people seem to be liking.”

The dinner menus will be coming out soon, and Kappy’s Downtown will start offering dinners to pre-order by the middle of October. The store will also be open on the weekends starting in October. The hours are to be determined.

Christi and Rick used to own a concrete statuary place in Port Charlotte, and when she became pregnant with her second child, Rick decided to work from home and start the Jeep business so he could spend more time with the family.

They have two pets that were both named after Jeep models. JK is a one-year-old Labrador, and there’s Ruby the cat – short for “Rubicon.”

Christi has one sister, Kim, who lives in Venice.

The family recently bought a house in South Gulf Cove and moved in June.

When she is not working, she enjoys spending quality time with her family.

“We really like just spending quiet nights at home, just renting a good movie and having a nice dinner …we’re a really close family, and we all get along very well, which helps,” she said with a laugh.

She has never participated in a tarpon tournament because she is usually working during them, but it is on her list of things to try.

As if she isn’t busy enough, she also sells advertisements for the Royal Palm Players. You can find her working away in the office at the Boca Grande Community Center at least one day each week.

Rick is from Massachusetts, so every year when PJ’s restaurant would close, the family would head up north and rent a house on a lake for a month.

“There was no internet, no television, and I loved it,” she said. “We’d go fishing every day … it was great.”

She didn’t get a chance to go this past summer, but Rick and Katie went in July.

Christi said her favorite perk from working in Boca Grande is seeing all of the people and watching kids grow up and start families of their own.

“Seeing the changing of the generations is really fascinating,” she said. “And watching new businesses come and go is always interesting.”

She said she’s looking forward to talking with her regular customers from PJ’s this coming season.

“I love the people on the island and can’t wait to surprise them when they see me here in the store.”

Stop in the new “Kappy’s Downtown” and say hello to this smiling customer service associate. Christi is there just about every day of the week.