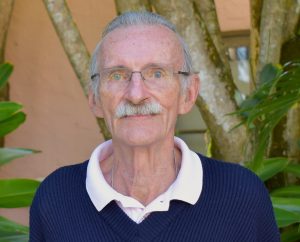 After serving in the Navy for almost five years and an accomplished 32-year career with IBM, Charles Stark returned to his original passion and earned a master’s degree in history at State University of New York. He always had a yearning to teach.

“I wanted to teach all along, because my mother and my grandmother were teachers, and all three of my sisters were teachers … so I was late to the party, but I finally got there.”

He earned the degree while still working for IBM and went on to teach high school social studies, college courses at Marist College and even taught a class on the history of food at the Culinary Institute of America in Hyde Park, New York.

“That was fun to teach about the history of foods,” he said. “Things like corn and chocolate – they came back to Europe to be introduced there. Many staples originated in the New World.”

“I commuted in and out of Manhattan every day,” Charles said. “I had to ride a train to Jersey City, take a ferry across the Hudson River and walk six blocks to the subway and ride that to 84th Street. I became acclimated to city life at a young age.”

Charles attended Holy Cross, a private Jesuit liberal arts college in Worcester, Massachusetts. Founded in 1843, Holy Cross is the oldest Catholic college in New England and one of the oldest in the United States.

“The high school I attended was a scholarship school,” Charles said. “About 1,800 of us took the exam, and they gave the top 10 percent admittance and scholarships.”

He earned a bachelor’s degree in history and also was in the NROTC program in college, so when he graduated he received his commission as an ensign in the United States Navy. He went directly into active duty and was promoted to the rank of lieutenant by the end of his service.

As an officer he had several assignments, including navigating a ship in the Mediterranean.

“The ship was home-ported in Naples, Italy, and I was responsible for making sure we arrived where we were supposed to be. It was a lot of responsibility for a 22-year-old.”

After that he went to a naval officer’s school in Newport, Rhode Island for six months. His commanding officer had recommended the school, which was designed to prepare junior officers for responsibilities on a destroyer. His training included engineering, weapons and operations. He was assigned to a destroyer escort in Newport and served there for a year-and-a-half, cruising up and down the east coast from the Dominican Republic to Halifax, Canada.

“At this point the Vietnam War was getting very active, and I was given an assignment on a destroyer in Yokosuka, Japan,” Charles said. “That was my last assignment of active service, and I had just gotten married at that time. I served four years, eight months and 23 days … but who’s counting?”

Charles met his wife, RoseMarie, in New York while he was on active duty.

He went home to spend Thanksgiving with his family, and his sister, Janet, said he had to meet a girl she worked with in New York.

Charles met with her briefly over the holiday weekend and called her a week later to ask her out.

Charles and RoseMarie were married six months later and have been enjoying a long and happy marriage ever since.

RoseMarie accompanied Charles to Japan for the last part of his service.

“She had always wanted to see Hawaii, my first assignment, and then new orders came for Japan, to be the operations officer on a destroyer.”

After the military they moved back to New York, and both applied for jobs at IBM. They both took the programmer aptitude test, passed and were offered jobs in Poughkeepsie, New York.

Charles and RoseMarie have a daughter, Susan, and a son, Paul.

Susan is a professor of philosophy at Bates College in Maine, and Paul has a Ph.D. from Harvard in statistics. He works for an international company that’s headquartered in London.

Charles and RoseMarie have five grandchildren – four boys and finally a girl, Hannah Rose, five, who is lovingly named after her grandmothers.

“Rose was RoseMarie’s mother and Hannah was my mother’s name.”

RoseMarie’s brother purchased a home in Boca Bay in 1993, which is when she and Charles were introduced to the island.

They would come to Boca Grande  for short periods while they were both still working.

When Charles retired in 2000, he began teaching. He taught for about seven years until RoseMarie retired from a school superintendency, and they purchased a place in Boca Bay.

“We love the island – there is such a wonderful sense of community here.”

The Starks spend winters in Boca Grande and summers in their home on the Hudson River in New York.

Charles and RoseMarie are tennis players and hit the courts several times each week.

“I play recreational tennis, and since we have become owners I’ve been involved in the men’s program on Friday mornings, and a group of us play on Tuesdays as well,” he said.

He was the men’s champion of the Friday program in 2015.

They both also enjoy the game of golf, walking nine holes at Lemon Bay Golf Club three or four times a week.

Charles has served as president of the Harborshore Condo board for the past eight years. The association is a 48-unit part of Boca Bay.

Charles was invited to join the Boca Grande Historical Society’s  board last year. He’s been a member of the organization for several years.

He said the house tours sponsored by the organization that took place recently attracted hundreds of people.

The history expert is currently part of the “Great Decisions” discussion group offered by The Friends of Boca Grande. A small group meets weekly to discuss world affairs. Produced by the Foreign Policy Association in New York, the Great Decisions program highlights eight of the most thought-provoking global issues America faces each year.

“We read the information ahead of time, then we meet and watch a documentary and have a discussion,” Charles said.

Charles is also a published author.

About 10 years ago, he was invited to write a story on Henry Hudson for an issue of “The Hudson River Valley Review” journal.

“We were celebrating the 400th anniversary of him sailing up the Hudson,” he said.

Charles was recently invited to join a small book club on the island. The group meets once a month to discuss pre-selected books.

Charles also organizes an annual veterans’ dinner at the Pass Club each November 11th. They’ve had many veterans and spouses come together on the occasions to reminisce and enjoy each other’s company.