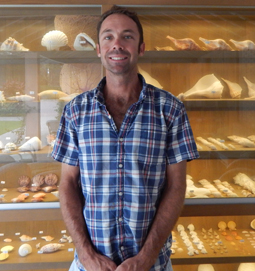 It’s difficult to pinpoint a “hometown” when talking with local fishing Capt. Leighton Ingram about his childhood, but if he had to choose a place where his roots were firmly planted, it would be Boca Grande. His father, Robert Leighton Ingram, was a corporate fishing charter captain, so the family lived and moved up and down the west coast of Florida for as long as he can remember.

They lived in places along the water like Key Largo, Naples, Clearwater and Panama City.

“I graduated from high school in Naples, but I went to high school in Clearwater and elementary school in Key Largo. We summered in Boca Grande. My most important memories of growing up took place here,” Leighton said. He recalls it wasn’t easy growing up as a charter boat kid. His dad would work for corporate clients and traveled with them to any destination they desired.

“It was tough. You have no stability, because you are constantly moving around,” he said. Leighton, 37, is part of the ninth generation of Aldermans who settled in the area. His family originally landed in Frog Creek, south of St. Petersburg, where they tended citrus, raised cattle and dabbled in real estate. After high school, Leighton attended Florida Southwestern University, but when his instructors noticed he was too distracted by extracurricular activities (mostly fishing), he realized college wasn’t the path he wanted to take. So he took a job with United Parcel Service. He started out washing trucks and eventually worked as a delivery driver. He continued fishing on the weekends, but ultimately he found he just wasn’t happy working that job. Leighton picked up a love for fly-fishing from a couple of well-known guides in Naples. Soon he was hooked.

“They created a monster. I learned that everything you can pursue conventionally, you can pursue on a fly rod,” he said. He used a food analogy to describe the two types of fishing. “Conventional fishing is like fast food: It’s fun, it’s good, and it will feed you. But fly fishing is like getting a good home-cooked meal after letting it simmer on the stove for a few hours. It’s very satisfying.” Both of his parents are deceased. His younger sister, Christina, married former Charlotte Harbor resident Jason Daniels, and they now live in North Carolina. His grandfather, Dr. Shepphard, lives on Damfiwill Street on the island. He remembers his father as a witty and wise man and always full of useful advice.

“He’d say ‘never count your kisses and never count your fishes,’ and although it took me a while to understand that, it soon made a lot of sense.” Leighton met Victoria, his wife of 12 years, in Naples. The two were set up to go on a blind date. Although he wasn’t really looking for anything serious at the time, it proved to be a meeting of fate. “I remember it was a lunar eclipse in the fall – and moon phases are extremely important. We just clicked, and one thing led to another, and now we have four lovely children,” he said. The couple has one daughter and three sons: Hunter Elizabeth, 12; Hugh Livingston, 10; Hamby Leighton, 7 and Harrison James, 6.

The kids were being home schooled, but they’ll be attending Punta Gorda schools next year. Leighton said Hunter loves back bay and tarpon fishing, and she even makes her own flies for the fly- fishing rods. “She’s very creative; she must have gotten that from her mother,” he said. Hugh, Hamby and Harrison also enjoy fishing. “They like to catch squirrel fish. It’s quality family time where we catch up, but it’s hard with my hours, because I am often not at home,” he said.

To explain his work responsibilities to the kids, he credits a phrase his father used to say: “The tide waits for no man – and you are at the mercy of the weather.” As far as Boca Grande is concerned, it will always be a special place in his heart, and he has no desire to ever leave it. “There is no other place like this is the world. There’s a certain unique sense of mystique to it. It doesn’t matter who you are. And the kids love coming out to the island and spending time with their great grandpa.” He remembers when there were no golf carts on the island and the current cart path was just railroad ties, and Boca Bay was filled with raccoons and rattlesnakes. “If you were lucky you had a bike; if not, you walked. And there were sand spurs here like you wouldn’t believe.”

He recalls that for entertainment, kids would chase the mosquito fogger truck and then go over to Whiddens to buy candy bars. “That was a pretty long walk from 18th Street,” he said. Aside from all the changes and progression, he still values the Boca Grande he knew from when he was a boy. He has fond memories of going down to First Street with his parents and recalls how they would sit and watch the sunset and enjoy a cold beer while he’d climb the big Australian pine trees. He also remembers getting caught pillaging in Mr. Sharp’s garden one year and having to pay back the debt by sanding and painting boats for Duane Futch. Capt.

Leighton usually fishes in Boca Grande about three times a week. He keeps one boat here and the other at his home in Punta Gorda. He’s been a full-time fishing captain for six years. “I really don’t even consider it a job; it’s my passion.” And he still enjoys spending quality time with his granddaddy and listening to stories of what the island was like during those days. The fishing guide highly values the advice he’s learned from many local captains over the years.

When he worked at Millers, he would hang around by the docks and listen as the captains shared their experiences over a cold beer. “Those gentlemen are a key factor in my life and how I perceive it. They taught me that you have to be appreciative and respectful of the past,” he said. He added that the island is filled with genuine characters who have countless stories to share. “Some of the older captains – if they’re willing to talk – have a huge mass of knowledge. But many of them can be very tight-lipped, so you have to keep your ears open and your mouth shut.” Leighton’s hobbies include reading, writing and cooking southern food. Spending time with his family is at the top of the list. He also has recently become an avid bird watcher. He often seeks answers from Cappy Joiner about certain bird species, since Cappy’s known to be a local expert.

Leighton has taken some recent trips to the Midwest to take part in fly-fishing expositions. “It’s been interesting to learn about freshwater fishing, which is an entirely different concept than fishing here.” His family has been in Florida since the early 1880s. They settled here and were part of the growing agriculture and citrus industry. His paternal grandfather, Jim Ingram, owned Journey’s End on 18th Street, which was a bed and breakfast. “It’s the second-oldest house on the island, but it’s now owned by a different family,” he said. He worked with Dr. Henry Wright and helped bring him to the island clinic. Both of his grandfathers were physicians. His grandmother, Frances Alderman Ingram, holds two world records for tarpon fishing, and her largest fish is mounted in the Loose Caboose restaurant. “I have the original spool that she used when the fish was caught,” Leighton said. Capt. Leighton Ingram owns Krewe Chief Charters. The name Krewe Chief is actually one of his great grandfather’s citrus label brands. He is a member of the Boca Grande Guides Association and a U.S. Merchant Marine. “

My dad always taught me that the guide business is 90 percent human relations and 10 percent fishing. Fishing is a learned skill, so if you spend enough time with a particular guide, you can learn much of what he knows,” he said. Leighton loves to write about his fishing experiences whenever he can find the time. “My wife has been encouraging me to do it, so I am starting to reach out to different people to get some of my work published,” he said.

If you’d like to take an excursion on the water, you can reach Capt. Leighton at 239-776-2904 or via email at leightoningram@yahoo.com or check out krewechief.com.

Newer PostObituary: Peter Higgins Hoyt
Older PostEveryone should have the right to protect themselves