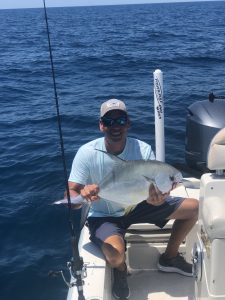 BY OLIVIA CAMERON- The small seaside town of Boca Grande is built on a foundation of fishing families. Fishermen alike flock to the island for each tarpon season, share their livestock with the locals and cook their greatest catch.

For Capt. Chuck Jenks, the festivities are all too familiar. Born and raised on the coast, Chuck spent his childhood riding the rough waters of the Charlotte Harbor. He never second-guessed his love for rough seas.

“My uncle, Steve Jenks, was my biggest mentor,” said Chuck. “He introduced me to fishing when I was four years old, and he showed me different fisheries throughout my entire childhood.”

A year after his graduation from Charlotte High School, Chuck combined his love of fishing and tackle skills to create his own Florida fishing charter guide service. Since 2001, he’s fished and guided in the waters of Boca Grande, Charlotte Harbor and Pine Island.

Today, Chuck remains a Deep Creek resident after growing up there 38 years ago. He has been well acquainted with waters of the Gulf and enjoys catching what lies below the surface. “This is my 18th season guiding, and Boca Grande has had a great impact on my fishing life,” he said.

To Chuck, fishing isn’t just his career, it’s his life. He has spent the past 15 years fishing the tarpon-infested waters of Boca Grande and seeking snook, redfish and trout in the Charlotte Harbor. He specializes in light-tackle flats fishing as well. Light-tackle fishing involves casting bait and using a light-action spinning rod and reel bound in a light-test fishing line. 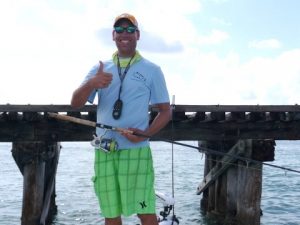 “Between April and October, I don’t fish for anything else but tarpon,” said Chuck. “In the Charlotte Harbor, tarpon season lasts for seven months, and I split my time fishing between the barrier islands and the harbor.”

In 2014, Chuck served on the board of directors of Save the Tarpon. This nonprofit, formed by Tom McLaughlin, his wife and local guides, worked to eliminate destructive tarpon fishing and protect them from heavy hooks, snags and threats such as shark bait. Chuck joined Save the Tarpon to contribute to their campaign of supporting ethical angling.

Save the Tarpon went against the controversial Professional Tarpon Tournament Series in order to protect the Boca Grande Pass tarpon fishery. In 2015 the PTTS owners abandoned the lawsuit meant to silence Save the Tarpon.

Chuck was glad to see the elimination of the troublesome series around 2016. “We had a law changed on tackle requirements to eliminate the snagging lure. Our goal was accomplished with the support of islanders and other locals,” said Chuck.

During his time collaborating with Save the Tarpon, Chuck learned the importance of protecting local fish and monitoring angling culture. He also discourages “jig” fishing. This does not involve leaping anglers.

“Jig” fishing refers to the use of 6-ounce pieces of lead strategically placed on a lure and hook, being dropped in a school of tarpon where, if hooked, the fish will be snagged. He does not condone techniques harmful to the Boca Grande Pass fishery. Chuck has noted that if local fish are taken care of, then a good tarpon season will be the result.

His fishing ventures have nonetheless been sparse since the Coronavirus outbreak. Chuck was one of many captains caught off guard by the unusual fishing season.

“COVID hit and we lost a lot of business, but now we’re seeing the light at the end of the tunnel,” he said. The worldwide shutdown when the pandemic began created a domino effect. The hectic economy issues trickled down to fishermen. “We lost about 55 trips around March and April because of flight cancellations and travel restrictions. Even Hurricane Charlie didn’t affect me like this.”

His family, on the other hand, has been his beacon of light throughout. Through a mutual friend, he met his wife in 2004. She has continued to assist those in need as a registered nurse at Fawcett Memorial.

Together, the pair has two daughters, ages 11 and six. Chuck is proud to keep the family close to home. “Our daughters are going to all the same schools I went to.” He is thankful to have a family that shares the same passion for salty boat rides. “My wife enjoys tarpon fishing and taking the girls out on the water,” said Chuck. 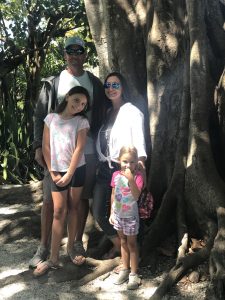 People have been eager to get out of the house, expanding the work of local charters. Chuck has missed the triumphant looks on anglers’ faces and the tarpon tumbling just below the surface.

Even so, the ocean isn’t something to play around with. On May 19, Chuck became a small-town hero after saving three boys from jumping off the Causeway bridge directly into a rip current.

Chuck was making his way over to the bridge to get crabs after his charter finished early, when he heard someone bellowing from the end of the channel. “I saw two kids 100 yards away from the bridge, and a third all cut up, holding onto the barnacles,” said Chuck. “The current they were stuck in was so fast. These are the strongest tides of the year.”

He hoisted the three onto his boat. “Those kids wouldn’t have had a chance. I free dive in the Keys frequently, but I have not experienced currents as strong as that.” Since then, Chuck has been uneasy about the incident and warns people not to jump from the bridge. Those unaware of the rip current’s pull should remember not to fight it.

Chuck has continued to blog on Boca Grande’s annual tarpon seasons while advertising the importance of careful catch-and-release fishing.

After many years spent on the coast of Gasparilla Island, Chuck has found local fishing to be a rewarding career. He appreciates the accommodating local residents and believes it all starts with a good bite.