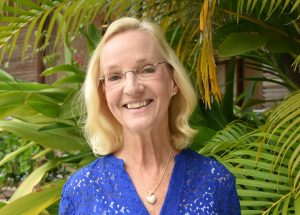 Boca Grande Woman’s Club member Candy Sasser understands that Boca Bargains is truly a treasure hunt for shoppers. If you’re looking for a last-minute Christmas gift, you still have tomorrow, Dec. 21 and Monday, Dec. 23 to find something special on the island without having to combat the crowds in area stores. And when you make a purchase there, you’ll be giving back to the community in many wonderful ways.

If you stop by the shop on any Monday, Wednesday or Saturday between 9 a.m. and noon, you’ll find Candy hard at work organizing items on the shelves or helping out shoppers who have questions about any of the items. On her days off, Candy and her husband, Billy, help pick up items that people wish to donate but who may need assistance dropping off their contributions. Good friend Todd Simonds also helps out when certain items are extremely heavy.

Originally from Chicago, Candy attended six different schools by the time she was in sixth grade. Her father was an agent for the Federal Bureau of Investigation, so the family moved to locations throughout the Midwest and Northeast every year or two. They moved to St. Petersburg when she was 11 years old. She finished middle school and attended high school in St. Pete and considers it her hometown.

“The moves really didn’t bother me because I was so young. It just felt normal,” Candy said.

Candy met Billy when they attended freshman orientation at the University of South Florida.

“We were sitting next to each other in a huge auditorium, and he asked me if he could borrow a pencil,” she said. “It worked, and we started dating right away.”

They were married that same year and are celebrating 52 years of marriage this year.

Candy studied mathematics and computer science at USF, and after graduating she worked as a computer software developer in the citrus industry in Tampa. She wrote software for payroll, accounting, marketing and inventory functions.

“Over the years, I learned a lot of different coding languages,” she said.

Nearly 11 years later, she started Sasser and Associates and ran that company for about 15 years. She oversaw a handful of associates who worked on various software development projects. They installed hardware, software updates and did maintenance. She sold the business in 2000.

Billy worked as a CPA and later joined the private sector as a CEO for one of his clients. They decided to retire in 2000.

The Sassers owned a 53-acre farm just north of Tampa. They sold their farm in 2015 and live in Boca Grande full- time.

In 1984, Billy bought a boat from a friend in West Palm Beach, and he brought it through the Okeechobee waterway and travelled north to Boca Grande Pass, where there was once a high and dry marina. It was at that time they were introduced to the beautiful island of Boca Grande.

“We were still working in Tampa, so we would come down on the weekends and go boating,” said Candy. “It’s so beautiful here – we love the island. I’ve always loved the beach, especially the Gulf of Mexico.”

They would regularly visit the island for the next 20 years, and they purchased a home at the north end of the island in 2009. Since 2015 they’ve been full-time residents of Boca Grande.

Candy and Billy have one daughter: Kimberly, who lives in Tampa with her husband, Andy Pivacek. The Sassers have three grandchildren: Katelyn, 26, a University of Florida graduate who lives in Atlanta; Andrew, 23, an FSU graduate who is married to Hanna and lives in Tampa; and Evan, 17, who just graduated from high school in Tampa earlier this month. Evan is in the process of applying to several Florida universities and plans to start classes next summer.

Candy and Billy will be headed up to Tampa with their dog, “Maddie Too” for Christmas. The 10-year-old golden retriever was named after her mother, Maddie, which stands for “Moon Over Madison Avenue.”

“She loves golf cart rides,” Candy said. “In fact, when we go for walks and a golf cart goes by, she thinks the people are supposed to stop and pick her up to go for a ride.”

The family plans on spending the week after Christmas in Tennessee.

“We’re going to be staying less than 20 minutes from Nashville,” Candy said. “There’s a lot to see and do there, and there is constant live music. Hopefully we can do some hiking and fishing if the weather cooperates.”

The entire family enjoys fishing, and they’ve caught many fish between the bridge and the railroad trestle, which is not far from where Candy and Billy’s dock is located.

When they are not busy doing volunteer work, Candy and Billy enjoy boating, fishing and traveling. They are both Boca Grande Sea Turtle Association patrol members from May through October. Recently they have taken three Viking river cruises on the Danube, Rhine and Seine rivers, and they’ve taken three Tauck Land Journey tours to Italy, Scotland and Spain. They’re also currently in the process of planning a trip for after Easter.

Candy is a member of the Boca Grande Sleuths book club, a discussion group of mystery-novel lovers. She also enjoys playing Mah Jongg at The Gasparilla Inn and the Boca Grande Community Center a few days per week. Both are members of Our Lady of Mercy Catholic Church on the island – Candy is an usher and Billy is a reader and server on Sundays.

Billy is also a member of the Placida Rotary Club.

Candy has been involved with Boca Bargains since 2016. She was looking for volunteer opportunities after she retired, and she had several friends who were in the Boca Grande Woman’s Club.

“I’ve known Jo Ann Welch and Susie Burdette for years, and they encouraged me to come and work at Boca Bargains,” Candy said. “And I’m so glad I did … I love being a part of their team. I met Jo Ann at Banyan Tree Pilates, and Susie’s son John has been doing all of the remodeling on our home in Grande Quay.”

Boca Bargains started as a rummage sale in 1986, and today it encompasses two small buildings at the corner of Palm and Banyan Streets. The shop is open Mondays, Wednesdays and Saturdays from 9 a.m. to noon from the Saturday after Thanksgiving until the week before Easter. The store will be closed on January 1, 2020 for the New Year’s Day holiday.