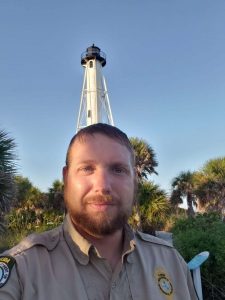 BY OLIVIA CAMERON- Visitors from across the nation come to Boca Grande to dip their toes in the gulf, trek a park path and watch the sun dip under a blanket of blue. Our go-to activities are made possible by the upkeep of the local parks.

With years of experience in maintaining Florida parks, Byron Maxwell has been selected as the new coastal parks manager. He now oversees operations on Gasparilla Island, Cayo Costa, Don Pedro and Stump Pass. To Byron, the ingredients for concocting a rewarding job are a dash of passion and a sprinkle of ingenuity. It’s the smiles on kids’ faces and returning visitors that make the recipe worth following.

His experience with park service started at the age of 15, when Byron decided to volunteer in his home town, Lake City. He recalled taking on the tasks no one else wanted to do, but he was still glad to contribute to his local community. “I was picking up trash and all of that fun stuff,” he said.

After graduating from Columbia High School, Byron volunteered as a fire fighter in North Florida. Byron juggled his day job at the parks with his work at the fire station. He then studied to be an emergency medical technician at the Lake City Community College. “While I was volunteering as a fire fighter, we took a lot of medical calls. I enjoyed helping people in that aspect, so I got my EMT license,” he said.

As the station was privatized, Byron focused his attention on the community. He continued to work on behalf of park maintenance and enjoyed every second of it.

“I am a fourth-generation park service employee, so I saw this career path coming,” said Byron. “I saw many of my relatives in the agencies giving back to the environment and providing customer service.” 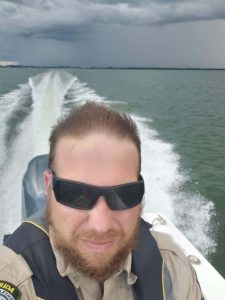 With his new managerial position, Byron oversees day-to-day operations, community outreach and the coordination with the Barrier Island Parks Society.

Even after managing inland parks for nine years, he has found the transition to coastal parks and the oversight of resources to be a gratifying challenge. “What’s new for me is managing sea turtles, the most exciting aspect of the change within my career,” said Byron. He is ecstatic to work on behalf of improving local facilities and providing a coastal environment rich with nature.

There are many things park staff take into consideration when providing a balance between a visitor’s experience and an animal’s safety. “For the Fourth of July, we saw situations where people were driving golf carts on the beaches and running over the nests. That is a type of vandalism, which is why we must continue to monitor visitation and educate the public,” he said. “The sea turtles are an endangered species that we need to protect for future generations. That goes along with the protection of our coastal parks.”

Not only does Byron keep an eye on the endangered species, but he must also find ways to keep local infrastructure fresh from salt exposure. “Parks and structures take a beating from the salt air. These historic buildings require special care, and there are specific guidelines we have to follow.”

Over the course of his seaside transition, Byron has found the job to be similar to his past experience, from monitoring visitor issues to staffing and budgets. As he follows his unit management plan, he envisions keeping the improvement of the parks consistent.

The department continues to implement a coastal resiliency element in each unit management plan for coastlines, wetlands, springs and other regions. “We are always looking at how to maintain and preserve natural resources while maintaining the infrastructure,” he said.

When the pandemic closed all local parks in March, Byron was hardly concerned about the upkeep. Instead, he found the shutdown to be a team- building pursuit.

“I was not concerned about the upkeep of the parks when the pandemic hit, and here’s the reason why: While the parks themselves closed to visitors for the safety of the visitors and staff, the staff was still able to come in to work while maintaining social distancing and following the guidelines. We were actually able to do a lot of maintenance on facilities statewide.”

Maintenance included a variety of tasks, from pressure washing and painting to building boardwalks and replacing siding on buildings. “When we had these projects, it became a team morale booster.”

As the parks have reopened with the new safety implementations, the Florida State Parks will continue to follow local orders on facial coverings to provide for staff and visitor safety. Hour limitations and capacities are subject to change as the parks continue to prioritize public safety. Now that the parks are up and running again, Byron is glad to once again interact with the community.

“The conversations are what make that lasting impression on the community,” he said. “We always like to leave that visitor with just a little bit of wanting more, so that way they’ll come back and get more. It’s especially amazing with the kids. They are the ones who go home and talk about it and get passionate about what they were told by a park ranger.”

He and his wife, Laura, are raising a six-year-old, five-year-old and a two-year-old. Their family is complete with their pups, a golden doodle and a Yorkie. 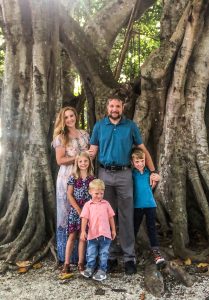 When asked if he sees a fifth-generation parks employee in the making, Byron grinned. “You know how kids are. Today they’ll talk about being a park ranger, tomorrow they’ll want to be an astronaut.”

As visitation has remained steady, Byron is hopeful for the future of the local parks. In the meantime, he is still eager to get up in the mornings and take on each adventure.

“Every day brings something new,” said Byron. That’s what makes his job worthwhile. “I’m not going to lie, I love going out on the boat, which I don’t get to do every day. When I do, it’s just a different atmosphere.” Overall, Byron has a hard time deciding what the most desirable aspect of his work is. “My favorite thing about the job is that I never know will happen tomorrow, let alone ten minutes from now.”