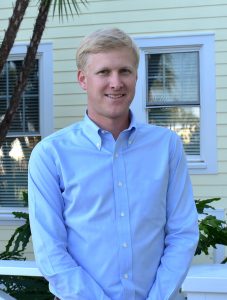 Ten years ago, Brent Cross accepted a position at the front desk at The Gasparilla Inn & Club. After learning new roles and holding various other positions at the establishment since then, Brent is now the director of operations at The Inn. He’s held that position since August, 2018.

“From 2008 to 2012 I worked as a concierge at the front desk, in reservations and guest services, and I also was housekeeping manager for a while,” he said. “It’s been a great experience learning so many different aspects of the business.”

Originally from Versailles, Kentucky, just outside of Lexington, Brent studied economics at the University of Kentucky after graduating from high school. He earned a bachelor’s degree and shortly thereafter was  offered a position in Boca Grande at The Inn.

He hadn’t planned on a career in hospitality, but once he gained experience and saw what life was like in Boca Grande, he quickly learned he wanted to pursue a career in the industry.

“The Inn is a very special place, and I knew I wanted to learn more about the island, and the history and preservation of the area,” he said.

Brent was introduced to Boca Grande by a friend’s dad who knew some of the managers at The Inn.

“That gave me an opportunity to come down and get to know the island,” he said. “I’d never been here before, and I immediately liked it. I come from a small town where everybody knows each other. The same kind of family atmosphere as here.”

Brent met his wife, Sharon, while they were both working at The Inn. Sharon is currently the director of sales and catering. They were married in 2012 at The Inn, and they moved to Kentucky shortly after that so Brett could obtain his MBA from Midway University.

For the next three years, Brent worked as an analyst for a bank holding company and as comptroller for a manufacturing company while he earned his master’s degree.

They returned to Boca Grande in 2015. Sharon is from Florida, so living in Kentucky was a different experience for her. Both she and Brent had anticipated eventually returning to Boca Grande.

“We always had a love for the island, but it was time for me to continue with my education,” Brent said. “We knew in the back of our minds that we would come back. And the stars aligned in 2015 for us to return.”

By that time, they had a six-month-old boy, William, who is now almost four years old. Brent and Sharon also now have a three-week-old daughter, Caroline.

It’s been a hectic few weeks for the young family, but Brent’s parents were recently here to visit, which gave them a bit of a break. Sharon’s family lives in central Florida. She plans to return to her position at The Inn in a few weeks.

Brent and Sharon work closely together on some business matters, especially with her being in sales, and they’ve always worked together very well.

While he was earning his MBA, Brent stayed in touch with General Manager John Reecher. “We have a great relationship,” he said.

He also worked closely with Glenn Price, who hired him back as assistant comptroller in 2015. In that position, Brent oversaw the day-to-day accounting for the hotel, managing payables and receivables property-wide.

Management did some restructuring over this past summer, and the possibility for Brent to move into the operations role became available in August.

“It’s been a busy couple of months, but it was a seamless transition, and one that I did not hesitate to take. My goal is to stay in accounting, so when I came back it was the perfect fit.

I love the hospitality business, and being able to use my accounting experience and merging the two together … it’s been a great opportunity for me.”

The operations department currently consists of the front desk/concierge team, the reservations team and the back operations, which is housekeeping, maintenance and grounds crews. In total, Brent oversees about 125 to 150 people during season. His responsibilities include the oversight of daily operations for the rooms division, which includes any maintenance issues and capital projects for the season.

The main building at The Inn property has 63 rooms, and property-wide there are 140 guest rooms. Then there is The Inlet, which has another 33 efficiencies and standard rooms. Boat slips are offered at The Inlet, which attracts more fishing enthusiasts during season. Guests can park their boats right behind their rooms and be out on the water within minutes, which is unique to the island.

Summers are busy for staff at The Inn, as the goal is to do as much of the maintenance at the property after July 4 as possible, so guests are not disturbed during peak season.

“We have such a dynamic team here. Our ownership and our employees  make this property so special,” he said. “Obviously there’s a great emphasis on the historical preservation of the property, but the people here are what makes it different from anywhere else.”

Brent said the staff members are stewards of the property, and their duties are to enhance guest experiences upon the very first contact.

“We pride ourselves on offering the best staff, so the guests enjoy a quality experience and a friendly atmosphere,” Brent said. “Every single employee here is second to none.”

When asked what he likes most about his job, Brent said it was the interaction among the employees.

“The team is very dynamic, and we’ve been able to all pull together and create a very close-knit team,” he said. “It’s a great place to work.”

He understands that there are certain guests staying here almost every weekend who are celebrating some of the most important times of their lives – such as weddings and anniversaries – and it’s his job to make things as special and memorable as possible.

“We have a unique property here, and it’s something that is not available in many areas,” he said. “We are able to market our properties because of that.”

Brent currently lives with his family in Placida. They have one dog, a golden doodle named Higgins.

“He’s a year and one day older than William, so that’s how we keep up with his age,” Brent said.

Brent’s parents, Lisa and Billy, live in Kentucky, as well as his younger sister, Olivia, who is a teacher.

All of them have visited Boca Grande and enjoy coming down for Christmas and for spring breaks.

When he is not working, Brett enjoys playing golf, and being from Kentucky, he follows live horse racing. He and Sharon like to visit Keeneland  Racecourse in Kentucky for the races in October and April.

“It’s always fun to spend a day at the races with family and friends. And we are looking forward to introducing the sport to our children.”

Brent participated in the World’s Richest Tarpon Tournament last year as part of The Gasparilla Inn team. Although he hasn’t caught one yet, he understands the excitement and draw of the tournaments and is looking forward to getting on the water and trying again next season.