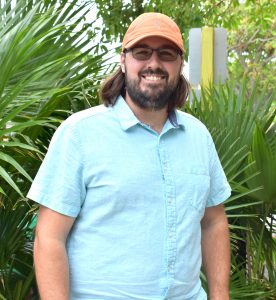 Brandon Bunton is the new head chef at 3rd Street Bistro & Bar, but he certainly is not a new face in town. He’s been working on the island since he was in high school.

For the past six years he worked in the kitchen at the Boca Grande Club.

He worked as a sous chef for 3rd Street nine years ago, and he had an opportunity to advance his career at the Boca Grande Club, so he seized it.

Brandon was born in Detroit and raised in the south suburbs of Chicago.

His first job was washing dishes at the Boca Bay Pass Club.

“My mother knew a women who was working as a server there, and she mentioned that they were looking for a dishwasher,” Brandon said. “I was in high school and looking to make some money, so I applied for the job. It was a great time, I ended up working there for about three years.”

After that he worked part-time at South Beach Bar & Grille as a prep and salad cook.

And he kept on working his way up from there.

After graduation from high school, he moved to Sarasota and worked at several restaurants, including The Longboat Key Club and a restaurant at The Ringling Museum.

Brandon met his wife, Kate, at Englewood Beach. They were both attending a birthday party of a mutual friend.

“We were friends for 10 years before we started dating,” he said. “We ended up spending a lot of time together, and it started to get serious, and eventually I proposed and we got married.”

They celebrated their 7th wedding anniversary on June 19.

“My wife’s father was diagnosed with cancer, so we moved back here, and that’s when I got the job at 3rd Street nine years ago,” Brandon said.

Kate works at the James Griffith Salon on the island and has been there for several years.

“She’s an aesthetician and does makeup and nails for weddings and other events,” he said.

Brandon’s parents, Sue and David, also live in the area.

“My grandparents had a place on Longboat Key, and we would come and visit them every year,” Brandon said. “My parents fell in love with the area and ended up getting a place in Rotonda.”

Brandon has two biological sisters and two adopted sisters. Ashley and Charissa are his biological siblings, and Alina and Alessia are from Ukraine.

“They were adopted from Ukraine several years ago, when they were teenagers,” Brandon said. “My parents had the opportunity to host children from a Ukrainian orphanage through their church. They hosted Alessia and just fell in love with her, but she didn’t want to leave her sister behind, so my parents adopted both of them.”

Some of his daily duties at 3rd Street Bistro & Bar over these past few weeks included completing some improvements in the kitchen, since the restaurant was closed for the summer. He also did some painting, worked on the tile floors and made sure the equipment was all ready for the restaurant’s season opening that took place on Oct. 25.

“We want to start out the season with nice, clean equipment that works well and is conducive to putting out good food for our guests,” Brandon said.

The restaurant seats about 90 people in the dining room, and there is an outdoor patio where folks can enjoy live music and entertainment in the afternoons and evenings. The patio is tucked away nicely just off 3rd Street and has lavish plants and trees, so it offers a bit of privacy.

“For the resources that we have and with the size of our kitchen, I think it’s a nice fit … it’s a good number,”

Brandon said. “We have solo artists who perform, and I think it adds a nice ambiance for our guests.”

Brandon has added some new items on the menu this season, and he hopes that people will respond well.

“We want to be a local restaurant that offers good, quality food in a casual atmosphere,” he said. “We’re

trying to cater to the people in our community as much as possible.”

When he is not working, Brandon said his priority is spending time with his family.

“We like to stay busy,” Brandon said. “I love to spend time with my wife and kids at the beach and parks, and we enjoy going to museums.”

He is also a big fan of music and like going out to see live bands perform.

Brandon also works as a private chef in Maine during the summer.

He enjoys taking his family lake fishing during the summer up north in Maine, but he says he hasn’t had a chance to fish much here lately because of his busy schedule.

Brandon also enjoys cooking and baking at home for his family, as well as gardening.

“I love taking a bunch of raw ingredients and turning them into something new,” he said. “It’s a great way to spend time with my kids doing something that interests me, and at the same time, it opens up their eyes about healthy lifestyle choices.”

When asked to name a person he’s greatly admired in life, Brandon answered, “That would be my father-in-law, Gene McCall. He started his career as a woodworker in New York City and came to Englewood and worked as an antique restorer. He was a fascinating, intelligent individual and also one of the kindest people I’ve ever met in my life. He was well known in the area and really cared about people and the community.”

The next time you stop in 3rd Street for dinner or drinks, trust that Brandon will be working hard in the kitchen to make sure your meal is of the highest quality.

3rd Street Bistro & Bar is located at the corner of East Railroad and 3rd Street. No reservations are needed. For more information, call (941) 964-0155.