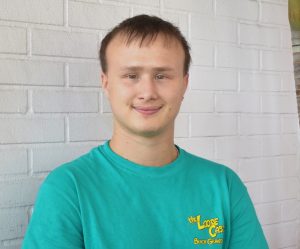 Englewood native Bradley Fuson has held several positions at the Loose Caboose Restaurant for the past four years.

At the age of 7, Bradley began practicing mixed martial arts and specialized in Brazilian Jiu-jitsu, a combat sport that focuses on grappling and sparring.

He had pain and problems with one of his feet since he was 5-years old, and after recovering from foot surgery, he was forced to find a new sport. His mother proposed that he look into wrestling and after learning more about it, that’s the sport he chose.

“I never even heard of wrestling until my mom suggested I give it a try,” he said. “It’s a fun sport.”

Bradley ended up excelling at the sport and was featured in the newspaper several times during his junior year. He was on the team at Lemon Bay High School for four years. In his senior year, he was ranked eighth in the state at the Florida finals competition in Kissimmee.

When he was in school, his favorite subject was math. Just for fun, he would make up math problems and challenge others to solve them.

But putting together words and sentences verbally is a constant challenge for Bradley. He was diagnosed with Asperger’s syndrome at a young age. Asperger’s is a developmental disorder characterized by significant difficulties in social interaction and verbal and nonverbal communication.

He started working at The Loose Caboose in Boca Grande when he was in high school.

“My mom helped me find the job,” he said. “She brought me out here so I could fill out an application.”

Regular customers usually see Bradley with a smile on his face and hard at work at the restaurant. And many of his co-workers think of him as a little brother.

“Everybody here is really nice … we’re like family here,” he said. “It’s a fun place to work.”

Bradley isn’t afraid to talk about the syndrome. He realizes that it may take him a bit longer to respond to questions, but he’ll patiently explain to others the challenges associated with Asperger’s.

“Sometimes it’s just really hard to think of things to talk about or think of the right words to say when someone asks me a question,” he said.

His main hobby is working on cars. His goal is to work at a mechanic shop or automotive company in the future. After graduating from high school, he studied automotive service technology at Charlotte Technical Center in Port Charlotte. The program offers courses that prepare students for careers in the transportation industry.

“I’ve always found cars very interesting and was curious about how they work,” he said.

Bradley enjoys drives his 2018 shiny blue Honda Civic to the island every day.

“It’s rated as one of the safest cars to drive,” he said. “My first car was a Honda, too.”

Bradley rotates jobs at the restaurant from dishwashing, to bussing tables and running food to guests when it gets busier. He’s also worked in the ice cream shop at the front of the restaurant.

His favorite flavor is Boca Banana. It’s made with bananas, caramel syrup and chocolate chips.

Some of his favorite items to order at the restaurant are BLT’s and conch fritters.

“And the Depot burgers are really, really good,” he said. “I like everything on the menu.”

Bradley lives in Englewood with his mother, Patti, and stepfather, Eric, who works for Michael J. Looney Electric and has many clients in Boca Grande. Bradley has one brother, Layne, and a sister, Jaide. The family has a cat named, Tabitha, which was given to Bradley as a birthday present from his grandmother.

When he is not working, he enjoys working on his car, going to the beach and watching the sunset.

“The beach is the first place I go to after work,” he said. “I really like the scenery.”

At one time, he had a pool table at home, so as a result he is a very good pool player. He regularly goes to Livingston’s Amusement Center in Sarasota, which has a large room filled with pool tables.

When he was in high school, he took a ceramics class in and really enjoyed working with pottery. He made a teddy bear jar out of clay.

“Things change forms once they are heated up in a kiln, so the shape of the pieces can turn out different that you expect,” Bradley said. “It was a fun class. I enjoyed it.”

He also made a paper mache dog.

Bradley works both the lunch and dinner shifts during season and said he’s looking forward to working more hours.

He said the restaurant serves almost 400 people for lunch during season, and even more for dinner.

“Bradleyis one of the most interesting people I’ve ever met,” said Chef Tim Spain, who works with Bradley at The Loose Caboose. “He’s always smiling and he’s always happy.”

The Loose Caboose is located at 433 West 4thSt. in Boca Grande. Stop in and say hello to Bradley the next time your craving fried green tomatoes or a crab cake sandwich.