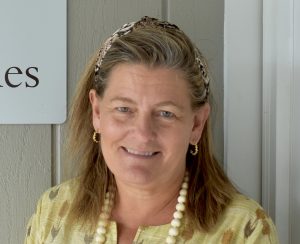 After 27 years of working in the fashion industry on 7th Avenue in New York City, Boo Thayer Gemes perceived a void in the market for stylish and affordable separates, so she created a collection of clothing that appeals to women of all ages.

“I design clothes for real people, clothes that I would want to own and wear,” she said.

The collection embodies the personal style and spirit of its founder.

About 10 years ago, she trademarked The Boo Gemes Collection, a distinctive lifestyle brand that is dedicated to modern fashion.

While she’s been doing trunk shows in a variety of resort areas throughout the Unites States for the past ten years, The Boo Gemes Collection has a strong online following, including many shoppers from Boca Grande.

Boo lives in a small cottage on her mother’s property on 19th Street in Boca Grande. Her mother, Edie Gardner, has lived in Boca Grande for more than 30 years.

“My mom is 94 and she’s truly amazing,” Boo said. “She takes a yoga class every day, and she’s now involved with a writing group at the Boca Grande Community Center.”

Edie is very involved with The Island School. She served on the board and still volunteers there one day a week.

When the family first moved to the area, they lived on Palm Island, Cape Haze and eventually purchased a home in Boca Grande.

“I came here as a teenager and for every spring break when I was in college,” she said. “At that time, there weren’t big fancy houses on the beach, and it was definitely less crowded.”

Boo seems to be always on the move. She recently opened up a retail shop at 2800 Placida Road, Unit 110, in Grove City. While traveling and hosting trunk shows in New York, Palm Beach, Vero Beach and the Florida Keys, her business partner Tory Sieglaff runs the shop located in Seafoam Village in Grove City.

Sieglaff and her husband Zeke started Gasparilla Outfitters in Boca Grande. They owned and operated the business until they sold it in 2007. Zeke is currently a
Realtor at Gulf to Bay Sotheby’s on the island. Tory has more than two decades of retail experience and has owned shops in Tampa and Philadelphia, so when her friend called and asked if she’d be interested in helping run the business, it was perfect timing.

“We were living in Philadelphia and our kids are grown, so we’ve been wanting to move back to the area,” Sieglaff said.

Boo (Marian) Thayer Gemes grew up outside of Philadelphia. The youngest of eight children, she was given the nickname “Boo” when she was a baby, because there was talk of her being a “Boo Boo” or a surprise.

Before starting her own business, she worked in the fashion industry in New York for 27 years. Having a  sales and merchandising background, she held a variety of
positions for several companies.

“I did product development and partnered with stores like Ann Taylor, Talbots and some other major department stores,” she said. “We would develop products for them using their labels.”

Before starting her own business, Boo had a show on the Home Shopping Network in Clearwater. She was on the air for a company with a label called “All About Me,” and from there she developed her own brand and logo.

“I designed a line of clothes that maintained quality but were available for a lower price point,” she said.

The experience at HSN led her to the idea of starting her own clothing line. So she left the 9-to-5 day job to pursue her goal. Bronxville, New York was home base for several years, and for three years she had a brick and mortar store, office and distribution center for internet orders up north. But the commitment to keep a retail location and staffing it became an issue.

“Really, the meat and potatoes of our volume was from the trunk shows and online orders,” she said. “I traveled to fun destinations that understood my brand.  And shipping products was convenient and easy.”

In the summer Boo travels to New England, Rhode Island, Maine and other summer resort towns.

In the winter she travels around Florida and hosts shows.

This February she will be hosting a show to raise money for the Boca Grande Health Clinic.

This will be the fourth one, and it will be held at her new retail store in Grove City. Previously the shows were held at her mother’s house.

“This way there will be plenty of space for people to try things on, and we’ll probably serve a little wine and cheese in the afternoon,” she said. “I’ll be giving 15 to 20 percent of the proceeds to the Clinic. We’ve really done well at the shows, because I think people like the idea of shopping and giving back to the community.”

Check future editions of the Boca Beacon for more details about event.

Always seemingly energetic, Boo draws inspiration from traveling abroad and celebrating time with family and friends. Her background in art history helped prepare her for the career she enjoys in the fashion industry today. As a leader in trend research and forecasting, she has partnered with a wide range of retail and wholesale customers on product development and merchandising strategies. During her career, Boo has traveled the fashion markets of Europe and Asia, and most recently, India. She just returned from a one-week business trip where she purchased materials from small companies that manufacture various fabrics.

“I’ve ordered fabric online for many years, but that was my first time staying there,” she said. “The people were kind and accommodating and really worked hard to produce exactly what I was looking for. It was a very positive experience.”

Her natural knack for fashion, coupled with her sales and manufacturing background, have allowed Boo the opportunity to create a stylish clothing collection that encompasses a great fit at a realistic price. Her fun, timeless fashion is inspired by her early years playing sports and riding horses in the country.

The entrepreneur owns a factory in New York, where many of her signature jeans, pants and tunics are manufactured. She also sells matching mother-and-daughter dresses and tunics.

New to the line are the Sammy Boxers. Her daughter, Sidney, had a friend named Sam who asked why there were no products available for guys. Sam suggested using leftover materials to make boxers. So the product was named in honor of him.

When she is not busy with the business, her hobbies include playing tennis, boating and spending time with her family.

“I love to go boating  – we spend a good amount of time on the water.”

Boo has two daughters: Sidney is 26 and Charlotte is 23. Sidney works in New York City, and Charlotte is currently in medical school at the University of Vermont. Both girls are coming to visit their mom and grandmother for Christmas this year.

Originally from Philadelphia, Boo’s family moved out to the country when she was a child, so she spent a lot of time outdoors. After college she worked at a specialty store outside of Philadelphia and then as a sales assistant in a showroom in New York City. She eventually worked her way up at different companies in New York.

Boo takes a brief vacation after Easter each year, and then stays busy for most of the summer.

Boo Gemes retail store is open Monday through Friday from 10 a.m. to 3 p.m. Appointments are also available by request. The owner is planning an open house to be held at the store soon. Keep reading the Boca Beacon for details about the event.