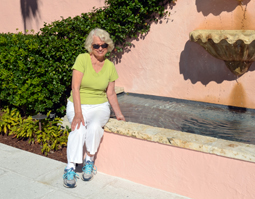 BY SUE ERWIN – Island visitor Barbara Runck has been coming to Boca Grande with her husband, Dick, since she first heard about it more than 30 years ago.

Her nephew bought a condo here decades ago and, once she came to visit with her husband, they decided to spend a winter month at the Boca Grande Club. They’ve been coming here every year since.

Barbara wrote a children’s book in 2015 called, “Liz Finds A Forever Home.” The story is based on a golden retriever she rescued from a breeder in the 1990s.

The book tells the story of Liz: How she spent the first several years of her life in a kennel taking care of her playful pups and later was adopted. She loved her new family and home. But soon, Liz realized she missed having a job. So she soon began a new adventure.

It’s considered to be an “easy book” – a short, quick read with illustrations on every page created by artist Mary Mischenko.

“The library back home keeps books like this in baskets on the floor so children can come in, sit down and easily pick them up and look at them,” she said.

She said Liz was the inspiration behind the book.

“She was just such an amazing dog. When we first brought her home, I just felt she was such an unbelievable, remarkable dog. She had so much affection and so much love to give,” she said.

Barbara adopted Liz from a kennel owner after her breeding years were over.

“She just fit into our household perfectly – it was amazing. Especially after not having much interaction with people before that – and considering she had not lived in a house before,” Barbara said.

Barbara said she heard the plea for visiting dogs from patients while working at the hospital.

“There was definitely a need out there for more dogs,” she said.

So, Barbara took Liz to a training school where she soon took a Canine Good Citizen Test and became certified to become a visiting dog.

“She just took to it like a duck to water – she did everything that was asked of her. So I thought maybe we could do this and visit some patients who were hoping for visitors.”

After that, Barbara and Liz visited nursing homes and a skilled unit at a hospital.

“And I thought it was just so rewarding – I loved how the patients responded to our visits,” she said. “I wasn’t sure if she would take to it that well.”

Barbara took her to see a veterinary specialist who said he would have to operate to find out what, exactly, was wrong. The doctor said Liz had leukemia and would need blood transfusions every other weekend, most likely permanently.

Barbara said Liz was six when she rescued her and she lived for three more years.

“They are working to try to breed that out. Some breeds are more susceptible to certain types of cancer and also to hip dysplasia,” she said. “And I just couldn’t do that – I don’t believe in prolonging life for animals or humans under certain conditions,” Barbara said.

So, sadly, they were forced to put Liz down.

Barbara said she didn’t want another dog for years after that.

She currently belongs to a writers’ group at her church. That’s when she decided to write the book about the very special dog last year.

She has since rescued another golden retriever named Beaufort, who is named after a town in South Carolina where Barbara and Dick own a condo on Harbor Island. They usually go there for vacation in the spring and fall.

Barbara was born in Arlington, Mass. She said her family moved around often because of her father’s work. He had a job in Cincinnati, Ohio. When Barbara was 17 and ready for college, her parents didn’t want her to go away to school, so she attended the University of Cincinnati.

She dropped out of school when she was a junior in college to marry her husband.

Barbara and Richard raised a daughter, Diane, and a son, Richard II.

Diane lives in Columbia, South Carolina and Richard II lives in Fort Thomas, Kentucky. Diane lived in Bonita Springs for about 6- or 7-years and then she and her husband decided to move back to South Carolina.

Barbara decided to go back to school and graduated from Indiana Wesleyan University with a BSN in Nursing. She worked most recently as a case manager.

When she first started college she was interested in studying education, but that soon changed.

She currently holds an active license in nursing.

She once started up an orthopedic unit for a hospital she worked at and she also worked as a nursing supervisor for a good amount time.

Barbara and Dick currently spend most of the year in Cincinnati living in a 160 year-old home that was inherited from Dick’s family.

“The main part of the home was built in the early 1880s and then it’s been added on to some,” she said. “We have hosted garden tours at the home.”

Barbara said gardening was another popular hobby until she started to experience back pain.

She pointed out that when she was working in the nursing field, they didn’t have the variety of apparatus that technology now offers to move patients around.

“We actually lifted people much heavier than ourselves and many of us have back problems later as a result,” she said.

Barbara said during the past 30 years, although she has seen a lot of new construction and real estate prices have gone up, the town is very much the same as she recalls it back then.

“Although we are seeing more new construction now, the town still has the same quaint, small village feel. And it’s still very quiet at night,” she said.

Barbara is currently working on another book, this one about white squirrels, which are popular to the town of Olney, Illinois. The white squirrel is the logo of the city.

A friend sent her a photo of one and Barbara immediately started researching facts about them.

She called the city hall and asked if anyone had ever written a book about the squirrels.

The book is going to be about discrimination and bullying from the prospective of white, brown and grey squirrels.

“No one seems to have done a book about that yet and so I thought I could,” she said.

So, her next book is currently in the works.

“However, my husband and daughter said I better work on selling the current book first before starting another one,” she said.

The book is currently available for loan at the Johann Fust Community Library.

Barbara will be attending a book signing at The Island Dog Boutique & Supply Co. today, Friday, Feb. 26 from 1 p.m. to 4 p.m. She will be sitting on the porch outside the boutique.

She will personally sign each book sold and add a “paw stamp” to personalize it.

The book is also available at Smart Studio on the island.

You can also order a signed copy directly from Barbara by emailing her at brunck@live.com.