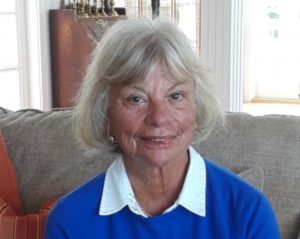 She keeps a busy schedule, and you can often find her on the tennis courts, playing bridge or attending an event at the Boca Grande Community Center.

Island seasonal resident Barbara Jenkins is involved in many island organizations, including several book clubs and movie groups. She also loves orchids, and they colorfully decorate her island home, but her absolute favorite thing to do is cook and entertain friends at social gatherings.

After the recent inaugural Boca Grande Film Festival, she hosted a dinner party that featured tapas from each of the films shown at the festival, and guests had to guess which film each one represented.

“I like to cook unusual things … that was a fun evening,” she said. “I think the Friends staff did a wonderful job with that film festival, and I am very much looking forward to next year’s event.”

Originally from Bloomfield, New Jersey, Barbara met her husband, David, when they were in high school. They dated through college and married right after graduation.

Barbara attended Douglass Residential College, an innovative undergraduate higher education institution specifically for women and a part of Rutgers University. She earned a degree in psychology. David was accepted into a law school in Charlottesville, Virginia, so they lived there for a few years.

In search of a job, Barbara sent letters to all the schools in the area inquiring about positions available to assist the school psychologist.

“This was in 1963, and there weren’t many school psychologists in Virginia at that time,” she said.

She received a response stating that although there wasn’t a psychologist at the school, there was a teacher vacancy for special needs students. She immediately replied that she was interested. It was in Lovingston, Va., which was 35 miles away from Charlottesville.

Many of the teachers didn’t want to deal with the more challenging students, and they wanted them removed from their classrooms. The result was a classroom of 6- to 13-year-old students in the basement of the school, and Barbara taught the class.

It was quite a big age range of students to be in one class. Barbara met with other teachers, and through the chain of command it was decided to divide the class into two groups, one of elementary school age and the other of junior high school to high school age. Barbara was reassigned to teach the high school students.

She worked with home economics teachers and gym teachers to see how they could integrate her students into their classrooms.

“Everyone was very willing to help, and they’d let me use their facilities – it was a good opportunity for the kids. They got to learn skills in the home economics class and be active in the gymnasium.”

When David graduated from law school, they moved to New York City and lived in Brooklyn Heights.

In the meantime, they also had two children: Bonnie and David.

Barbara did some part-time teaching in Brooklyn for a couple of years, and then David accepted a job offer in New Jersey. In 1971, after working at a major law firm on Wall Street for several years, David expressed an interest in going to Africa to teach law for his next career venture. He received a job offer from the International Legal Center, and after some discussion, they moved to Uganda in eastern central Africa.

“It was 1972, and we arrived at a politically tumultuous time, but it was (and is) a very beautiful country and the people were wonderful. We made some very good friends.”

Dave took a big salary cut to teach law, so Barbara took a job teaching at the international school in Uganda. The children were given scholarships to attend the school due to her position.

“But we didn’t have a house – we had sold it along with our car and everything else,” she said.

So they lived with Dave’s mother for a few months until they both found jobs. They settled in Summit, New Jersey, and that’s when Barbara decided to go back to school. After earning a master’s degree in psychology, she went on to obtain her doctorate at the Graduate School of Applied and Professional Psychology, also a part of Rutgers University. Their kids were in grade school at the time.

Barbara had a private practice in Summit for 20 years. She saw clients of all ages and offered youth and family counseling, as well as marital and group therapy.

“I did love the work; it was very interesting.”

She said the biggest challenge of her work was not to internalize the problems that people would bring into her office.

“I needed to have enough distance, but yet enough empathy to help them,” Barb said. “Sometimes, when I got home in the evenings, I would still be thinking about people and how I could help them. I really had to work on setting boundaries.”

Barbara discovered Boca Grande through her cousin, who had visited Sarasota and brought back a brochure that she picked up at the airport. It featured several homes on Gasparilla Island.

Barb called Realtor Donna Moore and inquired about one particular home, but the deal didn’t work out.

A year later she and Dave came down to Boca Grande and purchased a lot and built a home in Seawatch at the north end of the island.

Barbara and David both retired in 2000 and have been enjoying life in Boca Grande ever since. To keep active, Barb plays tennis at the Boca Bay Pass Club three times a week, and she also walks five miles every day. She plays duplicate bridge at the club three times each week and attends the literature forums offered by the Friends of Boca Grande.

Barbara and Dave love to travel, and whenever they visit a new destination, they try to take a local cooking class.

“We’ve taken classes in Turkey, Sicily and in Serbia,” she said.

They split their time between Boca Grande and New Jersey.

Hurricane Sandy destroyed the first floor of their home in Bloomfield, New Jersey in 2012.

“We had to have it lifted and moved and put on pilings,” she said. “It was quite a process, but it turned out beautifully.”

Daughter Bonnie and son David both live in New Jersey with their families, which brings Barbara and Dave back up north every summer. And the family members visit Boca Grande every winter.

The Jenkins are also involved with the Royal Palm Players. She helps organize benefits and also serves on the board of the Gulf Shores North Property Owners Association.

“We also joined the Boca Grande Pass Yacht Club, and I became involved with helping organize the Christmas parades,” she said. “We encourage you any boat owner who wants to attend next year, to decorate your boat and come and be a part of it – or just come and watch.”

When asked what she likes most about Boca Grande, she replied, “The people are so nice, I just love the community here. This is the best place I’ve ever lived in my entire life.”