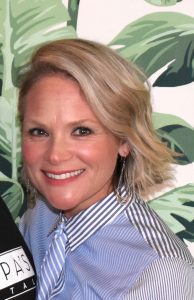 BY SUE ERWIN – Ashley Scarpa has been an entrepreneur in the restaurant business since 2006. Since April, she and her husband Glenn have been leasing the space that, until last summer, was home to PJ’s Seagrille located at 321 Park Ave. on the island.

They own and operate Scarpa’s Coastal restaurant.

The menu has an Italian accent similar to the original (which is staying put) but leans more heavily in the direction of seafood and Mediterranean cuisine, with choices including lobster ravioli, shrimp Diablo and snapper vernazza.

The general look is the same, although Ashley has added some beautiful new wall décor. The phone number is still the same, too. And locals will be happy to know that the fish tank located near the bar entrance in the restaurant is still there.

A soft opening was held in May.

“The community has been very welcoming,” Ashley said. “We had no idea that so many people would come in the first few days. We had about 100 people each night of our first week.”

The full bar and extensive menu seems to already be a hit with many who have tried it so far. Scarpa’s Italian in Lakeland has a huge following, and some of those followers also come to Boca Grande quite frequently. That’s actually how Ashley and Glenn found out that the property on the island was available. Friends mentioned they heard that the building that housed PJ’s and The Grapevine was up for sale.

“One call to Bob Melvin – and the rest is history,” Ashley said.

Although the deal fell through a couple of times, patience paid off, and they moved into the building in April. 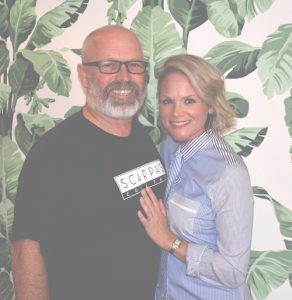 Ashley has been coming to Boca Grande for years. When she was little, her dad won a one-week retreat on the island through his job at Publix. The family liked it so much here that they’ve made it a part of their regular vacation plans.

“Lakeland is only a two-hour drive, so it was easy for us to come here for long weekends,” Ashley said. “And we would vacation here every summer.”

Glenn’s family has been in the restaurant business for several generations – dating back to his grandmother’s kitchen in the basement of her New York home. Some of those same recipes are still on the current menus of their two restaurants.

“Glenn and his father operated a restaurant together for many years,” Ashley said.

Ashley is originally from Lakeland. After graduating from high school, she attended Polk State College and Florida Southern University. She spent more than 12 years as a commercial and residential Realtor in Lakeland.

“I was a broker and had my own business,” she said. “I became involved in real estate in 2005, right before the market dropped, so my first year was amazing. I had a large property management portfolio and had more than 100 rentals.”

She continued to do that until they opened their first restaurant in 2008.

For years, Glenn and his dad owned Mario’s Restaurant in Polk County. They sold it in 2006. The new owners changed it a lot, and unfortunately the town did not embrace the changes. The property eventually went up for sale. Glenn was working in the construction business and realized that he really missed the restaurant business. So when the location of the former restaurant became available, he and Ashley decided to purchase it and create “Scarpa’s.”

“Growing up in the business, I had a good idea of what I wanted based on my experience,” Glenn said.

They named the new restaurant “Scarpa’s” so the community would recognize the family name. They kept the menu similar to what was on the menu at the former restaurant, and it was an immediate success.

“There are definitely new items and adaptations of things, but there are certainly still the classics that you’d find in most Italian restaurants,” Ashley said. “So the history of our restaurant spans more than the years we’ve been open – it goes back about 30 years.”

Being in both places for a while proved to be challenging, but almost two months into the new business, things have gotten much smoother for the Scarpas.

“We had to do a lot of dividing and conquering, and then we had to add new management in Lakeland. There is always a bit of a learning process with that.”

Betsy Joiner was the first person they hired at the new restaurant, so customers making requests or reservations get to see her smiling face near the entrance.

“We tried to get some of the kitchen staff from PJ’s, but since there was a gap in the business, most had to find other jobs in the area.”

Ashley said the most challenging part of starting the second business was establishing a new staff and getting them all up to speed by the time the restaurant was expected to open.

“You always have to anticipate a learning curve, especially when it’s a family business,” she said. “We all had to learn by trial and error and through daily practice. Our dishes are all made from scratch – starting with the sauce in the pan. So there was extensive training done in the kitchen. We feel like we have an amazing staff, and they are doing absolutely fantastic.”

Ashley taught yoga for nearly 12 years and still is a regular practitioner. She hopes to eventually teach a class on the island now that she is here full time.

When Glenn isn’t in the kitchen, you’ll find him saltwater fishing or golfing. When Ashley isn’t managing the dining room, you’ll find her practicing her love of the textile arts, which includes needlepoint and quilt-making. Together they spend time supporting Florida wildlife conservation efforts and traveling with their family, which includes Kacy (24), Jessie (23), Sandy (21) and Brecken (17).

“Brecken only has three classes left to graduate, so he is fortunate enough to be able to take those online,” Ashley said. “He’s a big fly fisherman and saltwater angler, so he is absolutely thrilled to be here.”

Glenn has been so busy with the restaurant that he’s only had the chance to get out tarpon fishing in the Pass a couple of times this season. Ashley likes going out on the boat, but she prefers to just observe the fishing.

“I like to needlepoint while the guys fish,” she said. “I find it very relaxing.”

Brecken helps at the restaurant as well. He will bus tables and do dishes on busy evenings.

Scarpa’s offers an extensive wine selection, and the restaurant also offers a variety of specialty drinks and a full liquor bar.

Right now the restaurant is open for dinner. Hours of operation are 5 p.m. to 9 p.m. Sunday through Thursday, and 5 p.m. to 10 p.m. Friday and Saturday. The restaurant will be closing on Mondays after July 4 (starting July 8) until the beginning of October. They will be open all summer.

“We don’t want to lose momentum with our employee training between now and season,” Ashley said.

If you’d like to make a reservation at Scarpa’s Coastal, call (941) 964-0806 or visit scarpascoastal.com for more information.

Newer PostOBITUARY: FLORITA FIELD
Older PostAnother terrific World’s Richest event has come and gone, thanks to the help of many