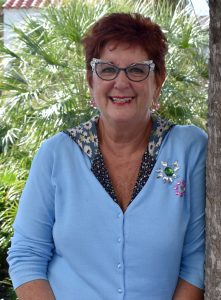 If you’ve attended a Royal Palm Players performance over the past few years and have been impressed by the wardrobe of the cast members, the artist responsible for that is Arnie Preston, costume designer for the organization.

Arnie became involved with RPP about five years ago and was the music director for the past two seasons.

Originally from Wooster, Ohio, she was a piano performance major at Ashland University and is a former private piano teacher.

She married her husband, David, in 1981. David was an officer in the Navy, and when he was transferred to Norfolk, Virginia, Arnie continued her education at Old Dominion University, one of the largest universities in Virginia.

“I was a Navy wife, and we lived all over the East Coast,” Arnie said. “We were in Virginia, Philadelphia, Rhode Island, and then ended back up in Norfolk.”

Being a military wife, she always followed the mantra, “Bloom where you are planted.”

She always embraced living in a variety of cities and held various jobs at banks, the YMCA and Newport Creamery in Rhode Island. She admits geography was not her strong point, so navigating around unfamiliar areas was always challenging.

After David retired from the Navy, he taught for a while and then worked as a government contractor flying drones in Iraq and Afghanistan.

Arnie stayed in Ohio and finished raising the children, and she took an interest in decorating homes.

“We have a lake cottage, and it’s filled with David’s military memorabilia from over the years,” Arnie said. “And we bought a little midcentury modern ranch in Ohio after selling our larger house, so I had fun decorating that house.”

Arnie and David have four children: Ben, Ryan, Kyle and Jenny Leigh. Ben lives in Ohio and works in the petroleum business. Ryan is an officer at PNC Bank and lives with his family in Ohio. He is also a football, baseball and basketball coach. Jenny Leigh was an equine therapist in Connecticut, but she recently moved back to Ohio and is a student counselor at Ashland University.

Kyle writes music for movies and lives in Seattle.

“I was so fortunate recently to be back in Ohio to see my oldest granddaughter win the championship volleyball game,” Arnie said. “Her mother is the coach, and I was so proud.”

Arnie and David are excited that their first great-grandchild is due in December. The parents plan to name the girl, Everly.

“We are so excited and feel enormously blessed,” she said.

Arnie said she was immediately hooked on Boca Grande the first time she visited the island with a friend. She found Gasparilla Island on the map and decided to take a day to explore the island. They stopped in the Johann Fust Community Library to pick up some literature about the island, and that’s how she learned about the Royal Palm Players.

Arnie said she is very grateful for the friends she has made in Boca Grande. “It’s such a wonderful community to a part of – everyone I’ve met is just amazing.”

“The Best Man” is the fifth show Arnie is doing with RPP. It’s an interesting story how she became involved with the organization.

“I was in California because my husband was transferred there for a while, and I wrote a letter to Dan Headington (RPP president at the time) and asked if I could be part of the chorus,” Arnie said.

She was offered a spot in “Oklahoma” five seasons ago, and she’s been involved with the organization in some aspect ever since.

“That was a blast, I had such a good time,” she said. “It was the first big musical that they tackled.”

Arnie and David have a home in Punta Gorda, and they split their time between here and Wooster, Ohio.

While David was still serving in the Navy, Arnie had her heart set on finding a winter home in Southwest Florida. She knew she wanted to live near the water. David gave her a modest budget to work with, never thinking she’d be able to buy a home for the amount that was available. To his surprise, she found a quaint little home in Punta Gorda about a mile from Charlotte Harbor, and they now enjoy spending the winters in Florida.

Arnie and David spend every Sunday in Boca Grande. They spend the day at the beach and then have dinner at the Gasparilla Inn or South Beach Bar & Grille.

“I don’t care if I ever go anywhere else on vacation, because I feel like we are in vacation for six months out of the year,” she said.

The stylish costume designer works for an ophthalmologist a few days a week up north during the winter months, and she owns nearly 20 pairs of trendy reader glasses. When she walks into a room, she immediately gets compliments on her chic sense of style.

That’s what makes her perfect for her role in helping design the costumes for the Boca Grande shows.

Last year she searched through Goodwill bargain bins and found hats for the ladies in the cast of “My Fair Lady.” The cost? A quarter each. Then she adorned them with pieces of green satin, and they looked amazing atop the heads of the performers.

Arnie has been very busy this week coordinating costumes for the upcoming RPP show “The Best Man.”

“The lead sometimes can have five or six costumes, and in the March performance of ‘Anything Goes’ there will be a ton of costumes, so that’s going to take a lot of planning. It’s a glitzy show – it’ll require a lot of color. To actually get to be behind the scenes is really eye-opening, I’ve always seen it, but I’ve never had the chance to be a part of it.”

Growing up, Arnie was involved in theater, and she also participated in an annual performance with the junior women’s club.

“My son was in ‘Guys and Dolls’ in high school, and they needed someone to do the costuming, so I did it. I used to have a vintage clothing store, so this all comes very natural to me. My friend Charlene helps me with all of the performances here – without her I would be lost.”

She recalls going to thrift stores with her grandmother, who raised her family through the Depression.

“It taught me how to work with money and find treasures and good deals.Looking back, I am so thankful my grandmother spent time with me and taught me so much.”

You can catch a glimpse of Arnie’s work next week at the Boca Grande Community Center auditorium. Four performances of “The Best Man” are planned for Thursday, Friday and Saturday (Nov. 8, 9 and 10) at 7 p.m., and Sunday (Nov. 11) at 5 p.m.

Tickets are available via royalpalmplayers.com or by calling 941-964-2670.

Newer PostISLAND LEO BEAT: Help! I’ve been involved in an automobile accident!
Older PostMany thanks to everyone who supports the Boca Grande F.D.