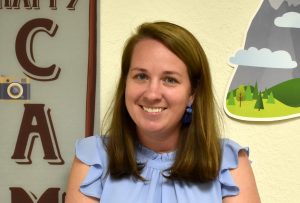 Anna Boney is the new Director of Children’s Ministry at Boca Grande Lighthouse United Methodist Church, and it appears to be an ideal match. She has years of background experience with Young Life, a global religious organization started in 1941 by Presbyterian minister Jim Rayburn. The organization’s mission is to introduce adolescents to religion, help them grow in their faith, and at the same time provide fun, adventurous and skill-building experiences.

Anna was a volunteer leader/mentor for Tampa Urban Young Life for several years and then joined Young Life staff as the South Tampa High School director.

“That was my first ministry job and I really enjoyed it,” Anna said. “It was a community outreach program, and it was open to everyone.”

Anna and her husband Bradford moved to Placida from Tampa in July of 2018. Bradford works for John Hancock Retirement Services and has clients from Tampa to Naples, so this area seemed like a good place to call home.

Anna, from Birmingham, Alabama and Bradford, from Mobile, Alabama, met while they were attending Auburn University in Alabama. They met in their second year, and were married right after graduating from college.

“He was actually the first guy I met on my first day of college,” Anna said. “We had a mutual acquaintance but were just friends for our freshmen year.”

After getting married, they moved to Atlanta, where Bradford was offered a consulting job. Anna taught third grade for the next five years.

“I always knew I wanted to be a teacher.” she said.  “My mom was a teacher, and I knew that elementary education would be my path.”

While living in Atlanta they had their first son, Bradford Jr.

When the family moved to this area in 2018, Anna met with Jean Thompson, head of The Island School, and expressed an interest in teaching at the school. The following year she began working as a substitute teacher at TIS.

“Having them all on the island works out perfect for me when it comes to balancing the two jobs,” Anna said. “And many of the kids who come to the church also attend The Island School, so it’s a pretty natural fit.”

One of her main responsibilities at the church right now is helping the children rehearse for the upcoming Christmas service celebration at the church, which is planned for 5 p.m. on Tuesday, Dec. 24. The kids will be singing at the service and will participate in the story of Christmas. Everyone is invited.

On December 22 the group will be singing at Heritage Oaks Assisted Living, and they’ll enjoy ice cream sundaes with the residents.

They’ll be singing for the congregation again at the Methodist Church on Sunday, Dec. 15 at 10 a.m.

They will also be practicing after the Boca Grande Woman’s Club Christmas tree lighting ceremony on Sunday, Dec. 8.

Anna oversees about 18 children between the ages of five and 12. Every Sunday the kids join other parishioners at the start of the service, and then they’re dismissed to the classroom, where they take part in crafts and activities and talk about stories from the Bible. All children in the area are invited to come to this community program; you don’t have to be a member of the church.

The kids recently participated in a “Holy Yoga” class led by Leslie Barrett at the church.

“She took them through the story of Moses and incorporated stretches and poses. They had so much fun,” Anna said.

The children’s director also tries to make the idea of going to church fun. She’s purchased new games for the game room, including a large “Connect Four” Milton Bradley game and card games. There is also a pool table and a ping pool table for the families to use during fellowship hour after the service.

“I’ve always said, ‘If the kids are happy going to church, the parents will come,’ and it has proven to be true,” Anna said.

Last week the kids decorated a paper turkey, and each added a “thankful feather” explaining what they were thankful for this holiday season. There is a new nursery assistant at the church, so babies and toddlers are welcome as well. The church also has a “Mommy and Me” room, where mothers can feed or change their babies while listening to the service from behind tinted glass.

Boca Grande Lighthouse United Methodist Church holds fundraisers throughout the year for Zoe Empowers, an organization that helps orphans and vulnerable children in life-threatening poverty. Their mission is to help young people become independent rather than dependent. Thousands of lives are saved every year, and the organization currently serves six different countries.

The BG Lighthouse Children’s Ministry has their own group they are supporting for the next three years, thanks to a generous church member who is matching the funds the children raise.

A spaghetti dinner fundraiser is planned for the mission on Wednesday, Jan. 29. The kids will be serving the food, and they will be singing an African song that was recorded by Zoe Empowers children. As part of an ongoing fundraiser, packages of “Zoe Cards” are available at the church fellowship hall for $20. The cards were painted by the kids at the church and have been printed and transformed into note cards.

“Tabatha did so many great things, and we’re trying to keep a lot of them going,” Anna said. Looking ahead, she’s hoping to reach out to the local middle schools and high school and get some teenagers involved in helping out with the youth program during season, when there are more people here with grandchildren.

“I think it would be a great way to engage them and get them involved.”

Anna said she has been enjoying spending so much time in Boca Grande and meeting new people.

“I truly love this church,” Anna said. “The people are so kind and generous, and this is such a wonderful community.”

Anna’s son Hampton is a 7-year-old author who published his first book this past summer. “500-Pound Tarpon” can be found at various stores on the island and at the Mote Marine Boca Grande Outreach office located at 480 East Railroad Ave. The book is $10, with 10 percent of the proceeds going to Mote Marine. Hampton has already sold more than 400 books, and he will be meeting soon with the CEO of Mote Marine to present a check.