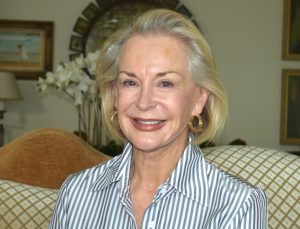 Ann Fletcher, the new president of Royal Palm Players, has been involved with the organization for the past 18 years and she’s been working diligently since June 1 on planning for an exciting upcoming season.

Her mentor, Roger Lewis, previously president of the Friend’s of Boca Grande Board on which Ann also served, advised her to work hard for the two-year term, make her mark and leave the organization ready for a new leader.

“There is much on my agenda to accomplish in this limited time; fortunately, a strong and hard-working board of directors is supporting me,” Ann said. “We are dedicated to providing Boca Grande and the surrounding communities with outstanding live theater and drama education to create a deeper sense of community, which enriches the quality of life.”

RPP has a new state-of-the-art lighting system made possible by a generous grant from the Boca Grande Woman’s Club, several other organizations and numerous private donors.

“We are excited to see this in action with our fall opener The Lion in Winter, directed by Meryl Schaffer, which runs from November 14-17,” Ann said. “As part of our educational process, this fully staged reading, featuring familiar actors alongside a few new to the stage, provides a learning curve for the actor. Arnie Preston, our professional costumer, has worked with Sarasota’s Asolo Theater to provide outstanding costumes for this production – transitioning the actor as well as the audience to Christmas 1183.”

“That was at the very beginning of RPP – it was in its infancy,” she said. “The Board of Directors were taking turns paying the electricity and phone bills.”

One of the first shows, a murder/mystery, was done in the Fletcher’s home on Gilchrist Ave. It was set in the 1920s. “That was before Bob bought and renovated the home,” Ann said.

Bob has been coming to Boca Grade for more than 30 years. He was one of the first owners in Boca Bay. Ann was working for a company in Sarasota and was designing some of the models for Boca Bay, so many of her clients were in Boca Grande.

Ann met Bob after he purchased the home on Gilchrist. He was looking for a designer to finish decorating the upstairs, and a colleague introduced them. They have been married for 18 years.

When she first became involved in RPP, she helped design the sets for the plays. She graciously volunteered her time to help with the sets when the organization had little money to do them. She began raising money via fundraisers for the sets, and eventually had a role in “Bus Stop,” a 1955 play by William Inge.

Ann is originally from Alexandria, Virginia. The Fletchers split their time between Boca Grande and Chautauqua, New York, where they also enjoy attending community theater performances.

When she is not handling RPP responsibilities, Ann also has been organizing the Boca Bargains Fashion show at The Gasparilla Inn that’s planned for Feb. 27, 2020.

“This will be our third show – we do it every other year.” She’s also on the “All That Jazz” committee for the Friends of Boca Grande.

“Bob was very instrumental in bringing jazz night to the community and helped with the arrangement at the Crowninshield House,” Ann said. “It’s a perfect venue to enjoy music and dinner with friends.”

In their leisure time, Ann and Bob both play tennis, and every March, they join a group of boaters and take a two-week tour of the St. John’s River in Putnam County, Florida. The river is the longest in the state, as it winds through and borders 12 counties.

There are 13 members on the RPP Board.

“And we’re all very busy – it’s an active working, Board. We are all responsible for various parts of the productions. Everybody has a role.”

To entertain audiences with something new this season, RPP is presenting dinner-theater events in the Powerhouse at the Boca Bay Pass Club. There will be four shows in December and four in January. Tickets are available through the RPP office and club membership is not required. The performance will be “Hands Across the Sea,” by Noel Coward. Ann is producing and performing in the “Hand Across the Sea” production this season.

“Tony Zaranti, the club’s manager, and chef Michael Klocinski have graciously worked out all of the details of the venue and menu so we can concentrate on the show – a one-hour-one-act Noel Coward comedy,” Ann said. “Familiar actors who appeared on the main stage last season will be in this show and Kate Ingram, recently retired from the University of Central Florida, Department of Theatre, is the Director.”

Many of the people acting in the dinner shows were in productions last year, including Ann, Maggie Bush, Terry Seitz and Priscilla and Mark Masselink.

Marcia Spencer was RPP’s stage manager and Ann’s mentor when she did her first performance in Boca Grande.

“I just loved her … she was fabulous,” Ann said. “She would guide me and follow me while I learned my lines. She was my guardian angel on stage – I still take the guardian angel pendant that her family gave me on stage during every performance.”

Ann said RPP places a great deal of thought and emphasis on education. Each year, seasoned actors teach classes to sharpen the skills of newer actors.

Acting professionals are also involved with children at the Island School every year. In addition to members of the RPP Board of Directors volunteering time each week during the season, several of the directors volunteer their time and experience providing a professional level of dramatic art education for interested students. They conclude with a year-end performance in the spring that is open to the entire community.

“I cannot emphasize enough our commitment to these young people,” she said.

In January, RPP will collaborate again with the Literature Forum in the reading presentation of “Other Desert Cities,” directed by Dan Headington.

In March, Joshua Chase Gold returns for his third year to direct “Nunsense,” the musical.

“And finally, to conclude our 30th season, we have a special celebratory one-night event planned on March 22, 2020 featuring a slide presentation of past events and performances along with popular show tunes,” Ann said. “It’s going to be a fun show and a great party.”

RPP is always looking for new talent and more volunteers. There are so many ways to become involved. If being on-stage or working back-stage isn’t appealing – hosting a cast party or providing housing for one of the out-of-town professionals is a great opportunity to join RPP.