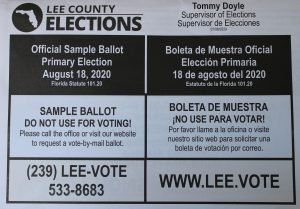 BY OLIVIA CAMERON- Residents of Charlotte County and Lee County should be preparing to cast their primary election votes on Tuesday, August 18.

The primary elections benefit the nominees running for state, county or district offices. As a “closed primary” state, Florida allows only voters registered under a political party affiliation to place votes. All registered voters may also vote in nonpartisan races.

With regard to the primary election, residents may have received an official sample ballot in the mail. These sample ballots are not under a registered party affiliation, so they provide separate sections relating to each political party.

The Democrat, Republican and nonpartisan sectors each list the districts and candidates for state and national congressional seats, as well as for sheriffs, regional school boards and other elective offices. The Lee County sample ballot also includes special district referendums to be voted on.

Residents have the option of casting their votes at the polls or mailing them in. Those ballots will appear different than the sample ballots, depending on a resident’s political party affiliation.

Charlotte County now allows early voting by mail to be dropped off between Monday, Aug. 3 and Sunday, Aug. 16, from 7 a.m. to 7 p.m. at any of the given locations.

For early voting locations or more information on the primary elections, visit lee.vote or charlottevotes.com. Affiliations can be changed or updated by submitting a voter registration application at any time. However, to participate in the primary election, the form must be submitted 29 days prior to the general election.