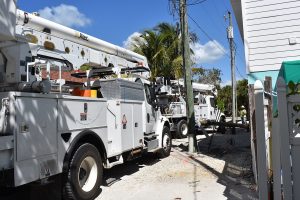 The power won’t go out … but it will … but it might not. That’s what we were dealing with in regard to communication with Florida Power & Light, as they were in the process of completing a grid-hardening project between Fifth and Second Streets in Boca Grande this week. This project will replace the current poles with upgraded ones that are storm-hardened.

Volt Power LCC Foreman Thomas Braxton said he personally went out to commercial businesses that could be possibly affected and explained there would be short outages between Fifth and Second on Park Avenue.

“We’re not here to interfere with any businesses,” Braxton said. “We understand there are a few restaurants that are powered by this cell block and we can work around their schedules.”

“I have two very good crews working on the project, so the outage between Gilchrist Avenue and Park Avenue shouldn’t last longer than about two hours,” Braxton said earlier in the week.

The Boca Beacon received conflicting information from an FPL spokes-person on Thursday morning.

“The equipment that was attached to the previous poles, used in underground power lines, will be moved and reattached to the new one,” said FPL spokesperson Matt Eissey. “This work is being done to increase the reliability of our service. Power outages are not expected with this work.”

FPL is currently in the process of a project to upgrade the power poles and lines in the area. A combination of concrete poles and upgraded underground lines is planned throughout the state of Florida. The statewide project is expected to be completed within the next three years.

Eissey said the Boca Grande project should be completed by the end of the first quarter of 2020.