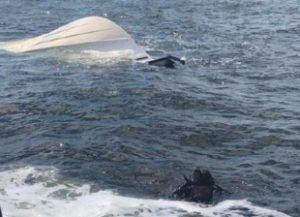 On Sunday, Oct. 13 at approximately 11:30 a.m., the Florida Fish and Wildlife Conservation Commission (FWC) received a report from the United States Coast Guard of a vessel taking on water in Charlotte Harbor near Devilfish Key, east of Boca Grande.

When emergency personnel arrived on scene, the vessel was capsized. One adult male, Eli Mack, 46 of Port Charlotte, was rescued from the water uninjured, and another person was reported to still be under the vessel. Charlotte County Fire Rescue deployed a dive team and located the missing boater, Calogero Polizzi, 63, of Port Charlotte, in the cabin of the vessel, a 22 ft. Cuddy Cabin style.

Rescue crews immediately began CPR, and the victim was transported to Englewood Community Hospital. Despite life-saving measures performed from the time he was found by emergency personnel and hospital staff, Mr. Polizzi did not survive.

The FWC is conducting a thorough investigation to determine what led up to this accident.

Newer PostPlacida boat ramp to be expanded
Older PostLee County: Sowing our wild sea oats to save the dunes from destruction