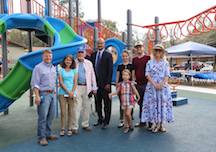 Children living in a small community in south Alachua County had only a balance beam and monkey bars at the their local park for years before something remarkable transpired, and Boca Beacon Publisher Dusty Hopkins helped make it happen.

He donated a vacant lot to Alachua County, and thanks to funding from the voter-approved Wild Spaces Public Places half-percent sales tax, a ribbon-cutting ceremony was held at the new “pocket park” on Wednesday, Feb. 26.

A pocket park is a little piece of green space where everyone can come to relax and enjoy nature. The community park is located at 817 SW 64th Terrace in Gainesville.

“I donated the land to Alachua County several years ago to be used as a park for the neighborhood,” Dusty said. “I am so pleased to have this park named after my deceased brother Mark S. Hopkins. It was a great day, and Alachua officials and SWAG volunteers made me very proud of a long and fruitful journey.”

A small playground previously sat on the site of the new park, but it was not up to the level of use it received from neighborhood kids.

“Kids in the unincorporated area of southwest Gainesville have a shiny new pocket park, thanks to Wild Spaces and Public Places and Mr. Hopkins,” said Alachua County Parks and Conservation Land Director Charlie Houder. “The park completely fills its quarter-acre lot with a play structure, a child-sized basketball court, picnic tables and benches.”

One of the greatest strengths a community has is organized residents who want to make changes.

Adjacent to the new pocket park is a new family resource center.

Dorothy Benson is a founding member of the Southwest Advocacy Group (SWAG), a grassroots community-based organization that strives to improve the living conditions, educational opportunities, health and quality of life for residents in the Tower Road corridor, just west of I-75 in the 32607 zip code.

“This is an area that has been historically underserved and overlooked,” said Benson. “Local governments look at needs depending on zip codes, and these towns just were not being recognized.”

In February of 2010, a group of nine women came together to discuss their concerns for a cluster of neighborhoods in southwest Gainesville, just outside of the city limits. The members of the group had been working in their own ways for years to raise awareness and bring services and support to the area, but it wasn’t until June of 2012 when the SWAG Family Resource Center opened its doors that their efforts truly made the impact they were all hoping for.

“We also offer classes like personal finance courses, and we help people create resumes,” Benson said. “There is an active job board, and we’ve had quite a few residents who have springboarded off of that and found work.”

Dr. Nancy Hardt, a retired physician from the University of Florida, developed a study on the link between low birthweight babies and families on Medicaid. Her research showed that people living in poor areas had high concentrations of these types of families.

“These families most likely didn’t have the means for prenatal nutrition and care,” Benson said. “When you support a family before they are in crisis, you give them what they need so they can thrive, and the outcome is always better.”

That’s when SWAG volunteers continued to concentrate on helping the Sugarfoot neighborhood community.

The South West Health Clinic was opened in March 2015, right across the street from the family resource center and pocket park. Medical services are offered at reduced rates, and low-cost dental services are also available.

Adding to the list of resources for the community, a childcare center opened up last year. The center is designed to support and enhance the quality of life, health and early education for young children and their families. It provides high-quality early learning for around 50 low-income children up to age five in the heart of the SWAG neighborhoods.

“It’s a model demonstration center for early childhood excellence,” Benson said. “The goal is to get children ready for kindergarten. Scientists say 85 percent of a child’s brain is developed during the first five years of life, so the earlier we start working with them, the better.”

Childcare providers from across the county will be invited into the SWAG child center to learn best practices from the University of Florida’s early- learning experts and improve their own model of childcare delivery.

SWAG partnered with more than 40 organizations, which culminated in the creation of the family resource center, a playground and a health clinic.

“Dusty planted a seed in 1995, and who could have imagined the outcome would be this big?” Benson said.

Dusty said he was absolutely overwhelmed to see all the progress in the community after he returned from the ribbon-cutting ceremony.

“SWAG is an amazing organization, and it’s great to see the volunteers doing so many positive things for the people in the community.”

Newer PostStop by the book fair next week at Fust
Older PostHave you hugged a Methodist today? Now is the time, pancake breakfasts are back