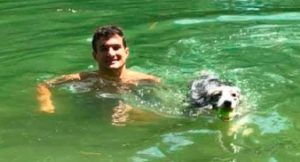 Several readers have contacted me regarding the news reports nationwide of pets dying after swimming in water affected by Harmful Algae Blooms, or HABs. Blue-green algae, otherwise known as cyanobacteria, has been the culprit in most of the reports. Many dogs have died after swimming in the tainted water, and reports have come in from all 50 states of such incidents.

Are your pets safe here in Southwest Florida if they swim in inland waters? Of course not … we have alligators everywhere. No matter how much your dog loves to swim, letting them get in drainage ponds, canals and other bodies of inland water is just a bad idea in general.

Because we are in the hot months of summer, all semi-stagnant waters in Florida are going to be teeming with bacteria. With excessive rain like we’ve had, all manner of things are running off into those bodies of water, including fertilizer, insecticides, fecal matter and more. Not only are those substances harmful on their own, they are food for harmful algae: When mixed with very high temperatures it can be a potentially-deadly cocktail.

Cyanobacteria has the potential to be fatal within hours – many times, by the time you see your pet is sick it is too late. The algae will affect the kidneys, GI tract, liver and nervous system of those it comes in contact with and symptoms include excessive salivation, weakness, a staggered gait when walking, difficulty breathing and convulsions.

There are several types of HABs other than cyanobacteria that can affect the liver and the brain as well. HABs can even be found in backyard pools and decorative ponds if they aren’t kept clean.

Some HABs are easy to spot, when they are of a different color than the water (blue, green, brown and red are common colors), and some are foamy, scummy or appear like a mat of organic matter on top of the water. Many types have a very strong smell as well. Other types of algae, especially those that manage to live in moving water, aren’t as hard to spot … just because you think the water looks all right doesn’t mean it is.

Keep in mind, children can be just as affected by these algae blooms as pets. Most people are a lot less apt to let their kids swim in a green pond, but let this serve as a reminder not to.

The bottom line is this: Whether you are in Massachusetts or Georgia, there is no state that has not reported some sort of death of a pet from HABs. Summer months and high temperatures breed HABs, and runoff into bodies of water during rainy seasons feeds the HABs. Lastly, just because water doesn’t appear to be tainted does not mean it isn’t.

Be safe this summer, and be choosy where your family and your pets swim and you should all be fine.

Newer PostProfile: Mike Bower
Older PostIt’s high tide at midnight: Do you know where your tarpon is?