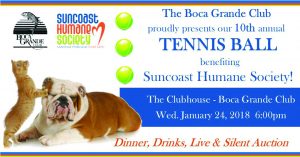 Plans are underway at the Boca Grande Club for their 10th Annual Tennis Ball on Wednesday, Jan. 24 from 6 to 9 p.m. in the Clubhouse at the Boca Grande Club, and the tickets are now available for this event. All proceeds will benefit the Suncoast Humane Society and the homeless animals entrusted to their care. Their services cover Boca Grande Charlotte and Sarasota Counties.

Guests will again enjoy a sit-down gourmet dinner, beverages, and exciting live & silent auctions. The auctions offer items including art, entertainment, and travel packages, including a shiny new red four-passenger golf cart with a one-year maintenance agreement; an exquisite 18k Omega Speedmaster automatic watch (suggested retail value is $29,500), a one-week stay at the El Galeon on Manasota Key; a cooking demonstration by Chef Greg Foos for 30 people, a lionfish table sculpture on a mahogany base; and various other items and packages. 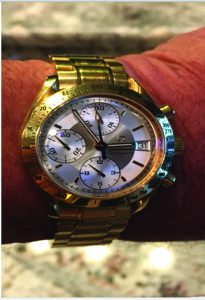 How about an 18k Omega Speedmaster automatic watch with a suggested retail value is $29,500?

Tickets are $125 and can be purchased at the Society, their thrift stores, the Boca Grande Club. Online purchases can also be made online at web site humane.org. Dinner and beverages are included with the ticket.

The Tennis Ball serves to kick off the Boca Grande Club’s six-week Professional Tennis Exhibition tournament. It will be held every Wednesday from January 31 through March 7 at the Club. There will be mens, womens and mixed doubles, featuring top professional and collegiate players.

Suncoast Humane Society has been serving animals and people since 1971. Founded as Englewood Animal Aid Society, the organization’s services and programs were soon challenged to meet the demands placed on them by the pet over-population crises.

Expansions to their facility in Englewood during the 1980s and 199 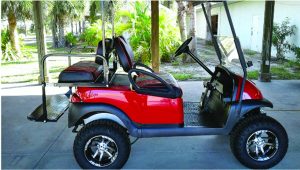 0s helped the Society to more effectively provide for a growing service area. To reflect the changes, the organization became Suncoast Humane Society. Today their service area includes Charlotte County, most of Sarasota County, and the Boca Grande portion of Lee County, a total of over 450 square miles.

Newer PostOperation: Wingman Down
Older PostNoted author to speak regarding Florida and the Everglades