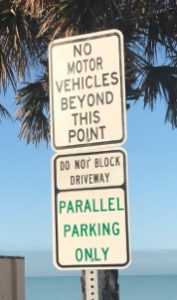 “Parking rangers issue citations on park ordinances and parking violations for 1st Street through 19th Street, at the Community Center, at the fishing pier, and the park properties off Wheeler Road and the guide docks,” said Tim Engstrom, Lee County’s communications specialist. “They do not arrest people, but they work closely with Lee County Sheriff’s Office, which has that authority.”

If you are parked at a county beach access, you must parallel park along the sides of the street. Cars may not park two, three or four abreast. You must also park behind the signs that say “no vehicles past this point.”

Stay safe and follow the rules, and you won’t have to meet Daniel or Jesse.