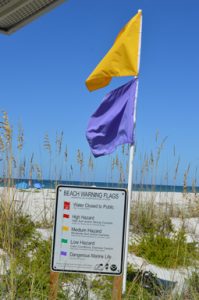 If you happened to visit the state park beaches on the island this week, you might have noticed a couple of colorful flags posted near the water.

The purple and yellow flags waving in the wind were placed there by state park rangers to warn swimmers about dangerous marine life in the water and to alert swimmers of moderate surf.

“The program has been in place for a while now, and we thought it was time to raise awareness at the four state parks we administer,” said Chad Lach, park manager for Gasparilla Island Administration, overseeing Cayo Costa, Don Pedro Island, Gasparilla Island and Stump Pass Beach State Parks. “We put the flags up about three months ago. We decided that since we get more than 800,000 visitors each year, it’s important to make guests aware of the conditions – especially since some of the visitors are coming here for the first time,” Lach said.

A sign posted next to the flags explains what each color means: Purple warns about dangerous marine life, green means calm conditions, yellow advises moderate surf, and red means high surf and strong currents. A double red flag warns that the water is closed to the public. Absence of flags does not assure safe waters. The flags provide general warnings about overall surf conditions and do not specifically advise the public about the presence of rip currents. The sign explains what the flags mean in both English and Spanish. Park rangers will be monitoring the conditions daily and adjusting the flags accordingly.

There are “no swimming” signs currently flying near the water’s edge at the pass.

In 2005, the Florida legislature decided that a uniform flag system would provide the best measure of safety. The Florida Coastal Management Program worked with the Florida Beach Patrol Chiefs Association, the United States Lifesaving Association and the International Life Saving Federation to develop the flag program for use by Florida’s beachfront communities to minimize the risks of drowning or serious injury.

More information can be found at dep.state.fl.us/cmp/programs/flags.htm.