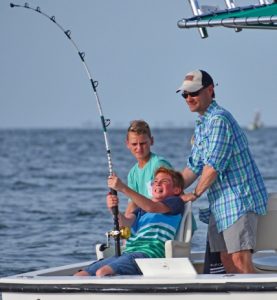 On Saturday, June 16, more than 20 boats assembled and headed out to the Pass in the third annual Red Gill Invitational Tarpon Tournament, named for the Red Gill Fish House which was the original name of Whidden’s Marina. It seemed as though family and tradition was the theme of the day, so it was apt that Capt. Blake Cheske’s team on Outta Line took first place with two releases. Not only is Blake’s wife Kacy Joiner Cheske (the Joiners being the family who currently own the marina), but the anglers who took the title were fishing in memory of a family member they have recently lost.

Luis Fernandez, Mike Bull, and James Granada were one man short this year in the Red Gill. Luis’ son, Elio, passed away in May and he had fished the tournament with them each year before on Blake’s boat. When they released the last two tarpon of the tournament back to back, the cry of “This is for you, Elio!” could be heard across Boca Grande Pass. There may have been only three anglers visible that day, but clearly they had an angel with them.

The Outta Line team won $6,000 for their first place win, but because the Red Gill rules don’t allow one boat to win twice, the team aboard Capt. Travis Joiner’s boat Family Tradition – including anglers John and Valerie De la Vergne and Alex and Melanie Walter – took the “last fish” third place award of $1,000.

Little Spook with Capt. Nelson Italiano took second place with the second most releases for $4,000, and Capt. Sandy Melvin’s team on the Boca Blue took the “First Fish” prize of $1,000.

Seth McKeel III, 12, caught that second place fish. His team has won either first or second place in the Red Gill all three years, with Seth being the winning angler on the boat each time.

Other fish caught in the tournament included releases by Faithful II and the Jill Marie. There were seven releases in all.

Island resident William Woodroffe said he and his wife Liz wanted to give back to the community and, more specifically, to the people at Whidden’s Marina. The Woodroffes donated the dinner for the tournament as well as coordinating it. Marine Tech, a company out of Perry, Florida, donated the trophies and the banner for the tournament. Marine Tech is the maker of Morgan boats, and many Morgan boats are in the Pass during our tarpon tournaments.

The next (and last) official tournament in the Pass will be held on Saturday, July 14 with the start time to be determined. It is called the Ladies Draw: Mix and Match Tarpon Tournament.

Newer PostFrom the Miccosukee in the Everglades to Boca Grande and beyond people are asking … where is our clean water?
Older PostSea turtle nesting season continues to thrive