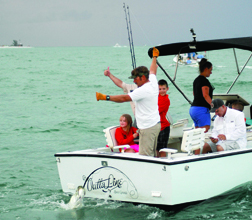 Almost as soon as lines hit the water in the 2016 Gasparilla Island Kids Classic, the tarpon were biting, the kids were hooting and hollering and 31 releases were recorded.

It was a success to say the least, with the Boca Grande Fire Department team on Outta Line, including Evan Cheske, 10; Sage Esposito, 6; Rock Esposito, 8; Kara Blosser 8; and Capt. Blake Cheske taking first place with five releases on their boat.  “It was very exciting when the fish would get on the line,” said Kara Blosser, who caught three of the five tarpon released.

“We had lots of fun pulling the fish, and we were happy when we won.”  In second place was one of the teams from The Island School on Miss Sarah with Capt. Lamar Joiner Sr. Anglers included Krystina Tieu, 11; Daniel Haines, 11; Laney Baker, 11; and Isabella Swelland, 10. They had four releases.  “It was my first time fishing for tarpon,” said Krystina. “I was a little nervous. Once I caught my first one, I thought it was really fun. I caught two in all, and my team came in second place!”

The “first captain” release prize went to Capt. Timmy Smith, and he received $500 in cash and a $500 service voucher, courtesy of Able’s Marine.  Each angler from the first-place team received an Apple iPad Pro (complete with a keyboard and pencil) and Herschel Backpack, courtesy of Columbia Sportswear.

Since the tournament began in 2011, more than $180,000 has been raised for children’s charities and programs.  This year an interactive art show was added to the tournament, which was held at the Port Boca Grande Lighthouse. Artists Rich Fizer, Maria Bone, Georgia Donnelly, Leni Franz, Carroll Swayze, Greg Albritton and Brody Fizer presided over tables with different themes. Children participated in projects such as magnet making or gyotaku art on shirts, and then got to take them home.

The Gasparilla Island Kids Classic Tarpon Tournament and the First Annual Kids Interactive Art Festival was a very fun day for everyone, and I was happy to be involved,” said coordinator Carroll Swayze. “I’m very proud of this event and of the artists who participated. We had seven stations of interactive art for the children to paint, sculpt, draw and print fish, and we were mobbed from the moment we opened the area.

Many of the artists spent weeks preparing for the event, drawing templates for the children to paint and gathering supplies for them to use in their projects. The event was more successful than any of us had expected, and creativity flowed throughout the day. I know that 300 to 350 kids came through to make art, because I ran out of the 300 shirts I brought to print real fish on. I want to thank my artist friends Greg Albritton, Rich Fizer, Brody Fizer, Leni Frantz, Maria Bone, and Georgia Donnelly for donating their time and expertise to teach art on a very hot day. “It was a blast.”

The action began at 5:30 p.m., with team Island School on Miss Sarah with a fish on just two minutes into the tournament. A minute later it was the team on Tracy Lynn with a bite, but both teams lost those tarpon. At 5:42 p.m. Capt. Timmy Smith on Sundown called in a fish on, and his team was the first to officially release in the tournament. That angler was Emily Sisler. Lucas Newcomb on Squaw was the first male angler to release a tarpon, at 6:17. It was right around that time, though, that the team on Outta Line caught fire. Kara Blosser’s arms had to be sore, as she fought three fish, releasing one at 6:22, one at 7:19 p.m. and her last at 8:10 p.m. Evan Cheske (10), her teammate, also released one at 6:47 p.m. and another at 7:41 p.m. Isabella Steyer, 7, caught her very first tarpon in the tournament, releasing at 6:47 p.m. aboard the Jill Marie. Her brother, Wyatt, 12, released one on the same boat at 8:23 p.m. Krystina Tieu had releases on Miss Sarah at 6:36 and another at 8:01 p.m. At 8:12 p.m. there were 22 releases, meaning nine were caught in the last 18 minutes of the tournament.

The last one called in during tournament time was at 8:30 p.m. by the team aboard Miss Sarah, but Kids Classic rules dictate that no team in first or second can also take third. That means that the tarpon called in at 8:28 p.m. by Capt. Jackie Bylaska and his team on the Mary Glen won them third place. Each angler with a release received a trophy and was recognized at the awards party after the tournament, held on the grounds of the Boca Grande Community Center.

The tournament is coordinated by Capt. Sandy Melvin and his team from Gasparilla Outfitters, and Boca Grande Charities, Inc., of which Michael Vaughn and Bill Klettke are officers.

“The 2016 Gasparilla Island Kids Classic Tarpon Tournament continues our theme of kids helping kids with record-breaking results,” Bill said. “A record 31 tarpon were released. A record $34,000 was donated to charity, bringing our total contributions made from this event to in excess of $180,000. We are very thankful for the generous support of our partners who provided financial support as well as volunteers, the participants in the event and the Boca Grande traditions of community involvement that make this truly the greatest kids fishing tournament.

Every year we make modifications to improve the event, and this year we were extremely happy with the interactive art festival, which will continue in future years. We look forward to expanding the number of entrants in 2017 and the continued support of our partners in the community.” For photos see pages 20 through 23.