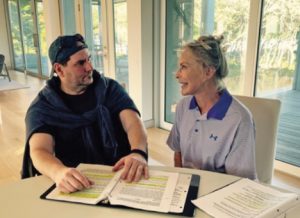 The Wyeth family gathers in Palm Springs on Christmas Eve around 2004, where embarrassing family secrets are revealed, lubricated by plenty of booze and resentments. “Other Desert Cities,” a play by Jon Robin Baitz, was a finalist for the 2012 Pulitzer Prize in drama. This is the fourth collaboration between Royal Palm Players and the Literature Forum, directed by Boca Grande’s talented Dan Headington. Dan also plays the narrator as he often has in his last productions of “All My Sons,” “Trip to Bountiful” and last year’s “A View from a Bridge.”

The play opens with the family in tennis togs, about to head to the country club. Daughter and author Brooke, home for the first time in six years, has brought the manuscript of her soon-to-be-published book for her family to read.

It is not a novel, which she has led them to believe, but a memoir revealing a family tragedy.  Brooke is portrayed by Nancy Ryan with convincing and honest emotion. Nancy was most recently seen as Alice in this fall’s “The Lion in Winter.”

The tragedy, which has impacted each family member in a different way, revolves around the Wyeth’s absent oldest son, Henry, a former political revolutionary with strong leftist involvement. The youngest son, Trip, was almost too young to remember Henry before his absence. Trip is played by Lew Hastings, recently  as the youngest son, John, in “The Lion in Winter.”

Trip is torn between his love of his parents and the needs of his older sister, Brooke. Lew easily guides us to empathize with Trip’s conflict while delivering pithy zingers throughout the performance.

Stan Ikenberry, a familiar friendly face on the RPP stage, wonderfully plays Lyman, the father and patriarch of the Wyeth family. Lyman is a former Hollywood actor famous for his shoot’em-ups before becoming involved in the GOP. He was named an ambassador under his friend and mentor, President Ronald Reagan. He and his wife Polly have chosen now to live in affluent exile in Palm Springs. Sally B. Johnson has the role of Polly. She models her character with behind-the-scenes power of her friend, Nancy Reagan.

As their son Trip reminds Brooke, “Mom is the chess player, not Dad.” Scenes between Lyman and Polly are riveting and real, thanks to Stan’s and Sally’s persuasive acting and chemistry on stage.

Some comic relief and truth come in the performance of Polly’s younger sister Silda, charmingly played by Linda Rollyson. Linda has been in many RPP productions over the years and finds true sympathy in each of her characters.

This role is no exception. Silda is a recovering and often relapsing alcoholic who manages to cut through all the attempts of fake appearances by Polly and Lyman. She carries her own guilt in the story of Henry. Silda allies herself with both Brooke and Trip. All three are politically liberal and have a hard time listening to Polly and Lyman defend their conservative ideals.

“Other Desert Cities,” the title, refers to a turn and road sign on the way to Palm Springs. You will be pleased to stay on this route as the ensemble of talented actors provides a powerful performance you won’t want to miss.  Show times are January 16 and 17.  Tickets are $10 and on sale through the Royal Palm Players office located at the Community Center, or call 964-2670.