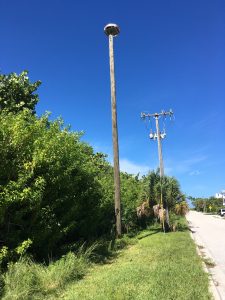 BY OLIVIA CAMERON- Seagate Development Group has confirmed that the Hill Tide Estates pier reconstruction is to be completed in the upcoming months while the project continues to develop. The construction barrier will remain on the beach until project completion to ensure the safety of the public.

But what about the safety of the island’s wildlife that used to live where the development is now? In 2016 Seagate began to clear the land, leaving local residents wondering what would happen to the ospreys who had been nesting there for generations.

Not only was the fate of the osprey who once lived in the many Australian pines that once lined the harbor in question, but residents who live on Belcher Road were wondering when an osprey pole that had once been located there, on the south side of the road, would be replaced. That pole had originally been put there by FPL, after several osprey were using power poles to nest. Residents had fought for the pole to be placed there as a suitable replacement for the power poles, and the birds were using it.

In August of 2016 residents were told that their osprey pole would be removed, because the road runs parallel to Hill Tide and construction traffic would be an issue. Those homeowners, who had worked alongside the Florida Fish and Wildlife Conservation Commission and Flower Power & Light to get that platform just 18 months prior to the construction, questioned why the removal was necessary. Seagate representatives were unaware of what the osprey pole meant to those on Belcher Road, and that same year they said they were looking into replacing the pole.

During the development, the power lines were placed underground, which relieved the ospreys from the dangers of electrocution. The power company stated that their new safety measures meant that the pole replacement was no longer up to them.

The questions is, if an osprey family had started to use the pole as their nesting place, whether it was up to FPL or not, they needed to create a new place for the birds to nest. 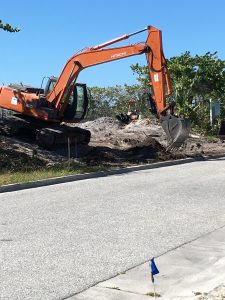 Another nesting platform was placed on the opposite end of Belcher Road in 2017. Area residents believe the replacement of the original pole has to be within the same immediate vicinity.

FWC spokeswoman Melody Kilborn stated that either a permit to remove the pole or a residential discussion would have been involved.

“Ospreys are not state-listed birds, so there would be no legal requirement to replace it,” she said.

The problem is, once an osprey makes a home, it becomes a generational home for that family of birds. This means they’ve found a location suitable for their survival needs, and those locations are becoming more and more rare.

According to the Roy Dennis Wildlife Foundation, an osprey nesting pole needs to be properly located. Throughout this seaside town, there are various locations near the water that can provide adequate fishing for an osprey. Because their diet consists of fish, the homes need to be very near the water.

However, with Hill Tide’s construction on the coastline, ospreys have had no choice but to relocate. In this case, the nesters either moved near an existing colony or to a completely new breeding ground. Human disturbance is one of the leading problems affecting the osprey’s habitat.

Another factor regarding the placement of an osprey pole relates to the occupation of the nest. The FWC states that inactive nests, or nests without eggs or young osprey that cannot fly, can be removed without a permit. It is undetermined if a permit was involved in the original pole’s removal, but the activity of the nest was not disclosed either.

“The most important part is that it must be an inactive nest to be removed,” said Kilborn. “They are an endangered species in Florida, so if it is unoccupied, they can remove it any way they need to.”

As a species of the Imperial Species Management Plan, the U.S. Migratory Bird Treaty Act protects the osprey. If we want to keep Gasparilla Island a wildlife sanctuary, there is more work to be done for the animal’s sake. But with FPL not allowing for any exceptions to their rule, it’s a strange puzzle to piece together.

Who will win this battle, the osprey or the authorities? We will keep trying to find out the answer.

A before (top left photo) and after (right) of the site where one osprey pole once stood. It has not yet been replaced. The line of Australian pines that used to stand along the southern tip of the property that now contains Hill Tide Estates was the home of numerous nesting Paris of osprey. Where they have gone, we will never know.