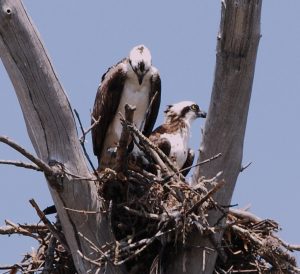 BY OLIVIA CAMERON- As mentioned in last week’s issue of the Beacon, it is uncertain whether the original osprey nesting pole that once resided on Belcher Road parallel to Hill Tide Estates will be replaced. In 2016, the pole was ripped from its place as Seagate Development’s project underwent construction. Talk of replacing the osprey pole dissolved over time.

Florida Fish and Wildlife Conservation Commission spokeswoman Melody Kilborn has confirmed that a permit to remove the original pole was not necessary. “No permit is needed for the removal of an inactive osprey nest,” she said. “Property owners are allowed to remove osprey platforms, especially if the nest may be subject to disturbance due to construction activities.”

However, the FWC has suggested that replacement of the pole would allow for the osprey that once inhabited the original platform to return to an optimal lifestyle.

“We recommend they provide a new platform, since the birds will try to re-nest somewhere in the same location, but it is not required,” said Kilborn. “If a platform is unable to be installed at that location, one option is to install a platform on a neighboring property.”

With Hill Tide Estates’ consistent expansion, it is unknown if the pole will be replaced alongside possible lot construction.

Now that FPL has placed the power lines underground, the chance of an osprey getting burned on the lines no longer exists. The ospreys at the south end have since relocated on nearby trees. It is evident that these birds have run out of nesting locations. Ospreys even made the Causeway bridge traffic light into a home. 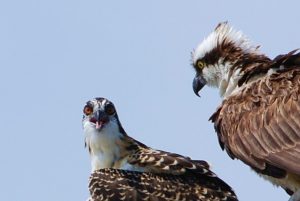 With the pole’s relocation up in the air, residents continue to question the future of the osprey population. And as land continues to be developed exponentially, the concept of coexisting with nature gets trampled.

Newer PostDon’t be getting too frisky on the water or the beach this weekend… Lee County Sheriff’s Office is watching
Older PostThe babies are a’hatchin’, please be mindful of them this holiday weekend