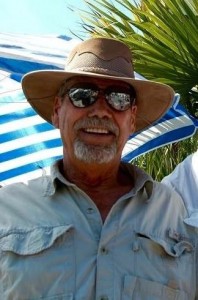 BY CARROLL SWAYZE – Our community is mourning the loss of one of our legends. James Sears passed away quietly around dinnertime on Saturday, March 5, 2016 with his family by his side. The art world in our little community will never be the same.

I met Jim Sears the first day I came to Englewood in 1977. I met him because he was unusual, and I am not one to miss anything unusual. In fact, my theory of life is this: There are unusual people in the world. They are everywhere. They do not wear a badge that tells you who they are, and they may not stand out in a crowd. Your job is to recognize them and spend time with them. It’s worth losing your job or missing an appointment to spend time with them, because they can change your life forever.

The Wright brothers are always my example: Imagine walking into Orville and Wilbur’s bike shop in Dayton, Ohio with a bicycle to be repaired. Orville is at the counter and writes up your receipt, then asks you if you’d like to have a coffee with them. You think about it for a moment and then tell Orville Wright that you can’t stay because you have to go home and fold your laundry. A month later the Wright brothers fly the first airplane and change the entire world.

You were in the presence of brilliance and you didn’t recognize it. You would truly never forgive yourself.

James H. Sears was one of those people. He was different, he was unusual, he was a legend.

I met Jim one day while I was getting to know my new community. It was 1977, and I was just a kid. I was driving down the old road into Englewood when I spied a ramshackle workshop and gallery on the left side. It was called the Tiki Shack. There were totem poles and plants in pots and piles of wood and lots of chain- saw carvings. There were big ferns in the garden and driftwood animals and lots of flowers.

The thing that caught my eye in all that flotsam was this odd, carved beaver sitting out front of the shop. I had to pull in. When I walked through the front door, I was greeted by a guy holding a chainsaw in one hand and a pair of sunglasses in the other. He had a big, warm smile, and I felt immediately at home. This is the Jimmy Sears that I will always remember.

He put down his tools, introduced himself and gave me a big welcome hug. I felt comfortable, I felt special and I felt like I’d known Jim forever. And from then on I did.

Jim was born on Harsens Island, Michigan, where his parents raised nine children. His father was a hunting and fishing guide who carved duck decoys when he wasn’t in the woods or on the water. He passed his carving skills down to his son, who started whittling at a very young age, carving small animals and fish and selling them for lunch money.

Duck decoys were a natural progression from the small, whittled animals, which led to a career creating large, award-winning sculptures. Jim started with a chainsaw carving animals and birds out of whole logs, then utilized hand tools and power tools to create beautiful, intricate wooden wildlife sculptures that became his trademark. Later he built his own foundry and cast his work in bronze, creating James Sears sculptures that will last forever.

As an artist, Jim Sears was prolific. He was always making art, regardless of what he was using to do it. When I first met him, he was carving wildlife and totem poles. He once carved a huge Indian for someone that eventually made it to Indian Mound Park, where it stood for years as the entry to the boat ramp.

He carved anything and everything. He could look at a piece of wood and immediately “see” something in it that he would bring to life with his tools and his talent. That was one of his true gifts. Creativity and artistic insight drove Jim Sears to make art almost every day of his life.

Jimmy had many talents besides his artistic gifts. He could sell anything, and I mean anything. He was charming and informative and boy, could he talk. Within the first few minutes of meeting Jim, everyone felt like they’d known him forever.

He was kind, and good, and smiled, and shared stories and made you feel comfortable.

And he had some stories. People say I have stories, but my tales don’t even compare to the myriad adventures that Jim Sears experienced over 76 years of living a life well lived. And he loved to tell them.

I have stories about Jim as well. Tons of them, and some I can tell and others shall remain private and in my heart and make me smile every time I think of him.

My three sons were always big fans of Jim Sears. Being a big kid himself, he always had fun with them. My youngest son, J Marlin, still calls him “Jim Serious” for some reason that I will never understand.

JIm started a co-op gallery in the old Tiki Shack with fellow artists Russ & Karen Hauserman, Ruth Conklin, Jim and me; then we showed together at any and every gallery or shop that came along in town over the next few decades. Our favorite, of course, was the Rukar Pottery Gallery, owned and operated by our friends and potters, Russ and Karen Hauserman. The gallery was in the building where Englewood’s on Dearborn now resides, and we all spent countless hours exhibiting our work, repairing and fixing up the shop and talking and laughing in that back room.

Jim and I were both early exhibiting members of the Boca Grande Art Alliance when the Alliance was in its infancy. During that time, in fact, I became president of the Art Alliance, and we spent many an hour driving to the island to show our work or to participate in the many art functions that were part of its early days.

We were also both members in good standing when the group decided we were from the wrong side of the bridge and told us we were no longer invited to show on the island. That’s about the time that Jim lent a hand to Barnacle Bill Verdon and when we decided to create the first Englewood Fine Arts Festival on Englewood Beach, which we eventually handed off to the Englewood Rotary Club.

Thirty years ago, Jim had a vision of creating an art show to provide local artists with a place to exhibit and sell their work each winter. He worked with then bank president Ferold Davis to start the first Englewood Bank Invitational Art Festival. Jim passed the baton down to me about 10 years ago, and I still run it each year at Englewood Bank & Trust in Englewood.

Back in the late 1990s, when the West Dearborn Street revitalization effort was in its infancy, Sears had the foresight to transform a small house at 30 Old Englewood Road into an art gallery. Then Jim convinced me that I should start my own gallery, so I leased the historic Rinkard Guest House next to him at the corner of Old Englewood and West Dearborn Street. For a few great years the two of us attracted art lovers from all over the world to our community. Every morning we would sit and have coffee together in the yard while we concocted amazing art events and fun gallery shows to bring people to town. It was a pretty special time.

Jim left this world survived by his wife, Claire; his sister, Ruth; his children, Chrissy, Paul, James, Laurie and Michelle; and his grandchildren. Lemon Bay Funeral Home has been selected to handle the arrangements. Condolences may be made online at lemonbayfh.com. In lieu of flowers, donations may be made to the James Sears Memorial Fund at Englewood Bank & Trust, 1111 S. McCall Road, Englewood, Florida, 34223.

There will be a Celebration of the Life of James H. Sears on March 31 (on what would have been Jim’s 77th birthday) at 3 p.m. at the Englewood United Methodist Church, 700 East Dearborn Street, Englewood, Florida. Everyone is welcome.

Personally I would call James Sears a renaissance man of sorts, living about six lifetimes in his short 76 years. A man of incredible energy, full of love and kindness Jim was an artist, a husband, a father, a grandfather, an inventor, a master gardener and a character.

Jimmy was my friend and mentor. I met him when I was just out of college and he brought me into the Englewood artists family with open arms and love. He taught me so many things over the years about loyalty and compassion, about making art and being creative, about nurturing relationships with the people who love your work and love you. Most of all, he taught me to live life loud and proud, which is what he did every day.

Jim leaves a legacy of incredible artwork, an unforgettable infectious smile and that ever-present twinkle in his eye.

I love you Jimmy Sears, and we will all miss you forever.