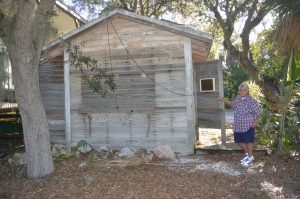 Capt. Marian Schneider, an ecotourism pioneer who owned Grande Tours Kayak and Paddleboard Center in Placida for more than two decades, is searching for an organization to take ownership of and preserve the old railroad trestle guardhouse.

The bridge tender’s house was originally built in 1910 by the railroad and rested on the Placida Railroad trestle until 1987.

It was manned 24 hours a day, and guards had to manually open the trestle for boats to navigate from Charlotte Harbor to the Gulf before the Boca Grande swing bridge was built.

“When the County announced that it was planning to demolish it in 1987, Boca Grande resident Art Paterson used a barge to physically remove it,” Schneider said.

A conservationist at heart, she purchased the guardhouse from Paterson in 1998 for $50 and hired a moving company to place it on property she owned at Gasparilla Road and Placida Road.

Since 1998, Schneider has been in possession of this unique item. But she’s ready to pass the 14×14-foot wooden guardhouse on to a Boca Grande organization that will take possession of it and preserve it for future generations to learn about. She wants to be sure the historical piece is protected and preserved, and she’s been trying to contact people at island organizations for the past five years, but has made no progress and fears if she doesn’t find it a permanent home, it might eventually get destroyed and forgotten about.

“I know how things can eventually get mowed over. I do not want anything financially for it – I just want someone to promise they’ll keep it and preserve it. It belongs in Boca Grande.

“I thought Gasparilla Island State Park might be a good home for it … it could be another historical piece if it was placed next to the lighthouse,” she said.

But Schneider was turned down when she approached staff members at Florida State Parks.

“And I’ve been trying to work with the Boca Grande Historical Society, but I can’t seem to make any progress,” she said.

Boca Grande Historical Society representatives said they just do not have the property to place the old railway trestle guardhouse on, as they rent a very limited interior space.

Barrier Island Parks Society member Jim Grant said he would like to see the guardhouse remain somewhere in Boca Grande. “I hope the structure can find a home locally, as it is a great part of our island history,” he said.

Barrier Island Parks Society Executive Director Sharon McKenzie said she previously told Schneider the organization was interested in helping, especially if they were able to secure the Florida Power and Light land at the south end of the island, but that never happened.

“At this time, we just have no place to put it. We have the property for Gasparilla Island Lighthouse, and it is possible to add it into the interior of the walking trail, where the train did actually go through years ago, but we told everyone we were not going to be adding structures to the property,” McKenzie said.

Capt. Robert Johnson has lived on the island for decades and has extensive knowledge about Boca Grande’s history. He said it would be a positive outcome if the County could team up with a local organization and repurpose it to meet current needs.

“Of course, space is always going to be a problem. What we need is a sponsoring organization to agree on placing it on land where a structure like that could help fill a gap that already exists,” Johnson said.

The guardhouse has been kept in its original state. It has an outhouse on the back, with original stained glass windows. Schneider added bunk beds inside and used to offer it to customers who came from out of town and wanted to spend the night at Grande Tours.

She said she also has access to house movers who could move the guardhouse, using a barge to the island, if it does get a new home here.

“It would be very easy to do, and then we wouldn’t have to deal with issues about getting it across the bridge,” Schneider said.

Schneider said she’s received strong interest from a couple of historical groups in the area that would like to procure the guardhouse, but she’d much rather see it go to a Boca Grande organization.

“It was an important part of the history of the island. It belongs here,” she said.