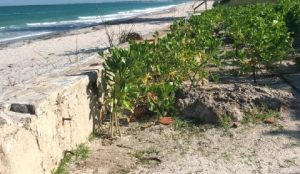 The right to roam the Promenade is being infringed once again, not only by overgrown bushes but by brand-new plantings right in the thoroughfare.

This seems to have become an annual ritual when the rainy season returns and the foliage becomes more lush. Rainy season doesn’t, however, account for the boulders placed in the middle of  the path along the seawall, or perfect rows of new plants.

The Promenade runs along the seawall from 1st Street north to 4th Street, where it stops at The Gasparilla Inn Beach Club fence. It has been there since the late 1800s, as it was once a highlight of every evening to gather your petticoats, grab your parasol and “promenade” along the Gulf of Mexico. The narrow strip of property was officially made available for public use in 1927, when it changed hands for one dollar between the Boca Grande Corporation and Boca Grande Associates, Inc.

granted, bargained, sold and conveyed, and by these presents does grant, bargain, sell and convey unto the said party of the second part and to its successors and assigns forever, all the right, title and interest of the party of the first part in and to that certain piece or parcel of land situate, laying and being at Boca Grande, in the county of Lee … bounded northerly by a line in continuation westerly to the Gulf of Mexico of the southerly line of Fourth Street … easterly by line coinciding with the westerly line of Blocks 17, 1 and 2 and the westerly ends of Third, Second and First Streets, as shown on said map; on the south by the southerly line of First Street …”

Paragraph two: Subject also as to the walk which now extends north and south along the easterly side of said premises in front of blocks 17, 1 and 2 and said Third, Second and First Streets … to the use thereof by owners of lots in Boca Grande, members of their families and guests …”

While the question of Promenade possession has arisen in the past, Lee County officials say this deed still holds up in court.

“Per the deed, nothing is supposed to be built or erected in the Promenade,” said Betsy Clayton, communications director for Lee County. “The pathway is supposed to remain clear. Typically we notice that individuals in the community remind each other that private citizens are not supposed to plant plants or place items in The Promenade, but when there is a path with nothing obstructing it, sometimes we do not receive complaints.”

Last year the Promenade was discussed at the April meeting of the Boca Grande Historic Preservation Board after some residents received letters from code enforcement and threats of fines for impeding the path. One family’s home addition was so close to the easement that the wall was considered to be obstructing the Promenade.

One board member said she was told by Lee County Code Enforcement that they no longer had jurisdiction over the Promenade, so there is obviously some confusion in the matter.

If you choose to promenade and you feel the walkway has been impeded, a call to Lee County Code Enforcement at (239) 533-8895 might be in order.