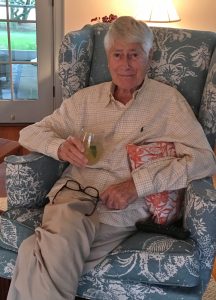 William Richard (Dick) Jones, of Boca Grande and Chatham, Mass., died in Chatham on September 19, 2017. He was predeceased by the love of his life and wife of 61 years, Margaret (Peggy) Twomey Jones. He is survived by his children, Jane Elizabeth Jones (Stan Cygelman) of Winchester, Massachusetts; Susan Patricia Jones of East Harwich, Massachusetts; and Richard Jones (Anne) of Louisville, Kentucky; his grandchildren, Kate, Alex and Charlie Rush; Jackie Cygelman and Rye and Henry Jones; and his sisters-in-law, Eileen Twomey of Brewster, Massachusetts and Maria Twomey of Boise, Idaho; as well as several nieces and nephews. Dick was born in Youngstown, Ohio on June 3, 1929 and was the beloved only child of H. Dudley Jones and Geneva (Price) Jones. Dick and Peggy raised their family in Youngstown and spent most of their married life there.

Before graduating from Babson College in Wellesley, Massachusetts in 1951, Dick purchased Rowan Steel Stamping Company, which he renamed Geneva Steel Blanking Company after his mother. In addition to hard work, persistence and conservatism, his success as an entrepreneur stemmed from innate fairness to all of his employees, customers and suppliers. His business approach embodied the same caring ethos that formed the foundation of his basic character. After more than 40 years of ownership, Dick sold Geneva Steel to the company’s senior managers in 1993. Dick believed that Youngstown was the ideal place to live, work and raise a family, and although he retired elsewhere, his heart always belonged there. Dick was nostalgic about the past, firmly believing that the post-World War II era in which he raised his family were the best years our country has seen, while at the same time being genuinely fascinated by today’s technological innovations and excited about advances just around the corner, such as self-driving cars.

During his younger years, Dick was a tennis, skiing and boating enthusiast, but golf was the abiding passion that he enjoyed almost to the very end of his life; it is also part of his legacy to his children and grandchildren, all of whom he taught to play and with whom he shared immeasurable good times. He was reserved by nature but also dapper and dashing, and he always had a ready wave and smile for anyone he encountered. Dick was the quintessential gentleman.

A private family service will be held.