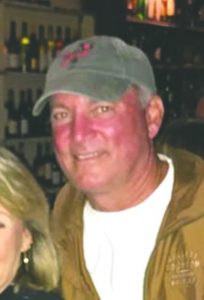 William Lee Bentley, Jr., Bill to all his family and friends, passed away peacefully on June 6, 2020 from ALS. He was at his home surrounded by his loving family, which was so important to him.

Bill was born to William Lee Bentley and Ruth Glass Balogh on April 5th, 1953 at Wright-Patterson Air Force Base in Ohio. He spent most of his younger years in Haines City and graduated from Haines City High School. After high school, Bill went to work with his Grandfather, Ernest Glass, in the family contracting business, Ridge Contracting Company, and went on to make that a very successful career. Later, Bill joined Ranger Construction Industries focusing on heavy highway construction management.

Bill grew up in Haines City and had many adventures there, but exploring Boca Grande and Gasparilla Island, as well as fishing Charlotte Harbor and offshore throughout his life and where he made many friends. Bill found the spots in the Gulf, in many of the passes and along the shore line that rewarded him, and his friends, with plenty of fish, in sport and for the table.

Bill retired early, and had established a life in Winter Garden where he had many close friends that remained an important part of his life.

In 2015, Bill met Terri Cunningham and they were inseparable from the start and were married in a beautiful weekend celebration in Boca Grande a year later, in June of 2016.

When it comes to family, you will not find someone more proud of his family then Bill was. He loved bragging about his son, Travis and all that Travis had accomplished, and was quick to mention that Travis had attended Clemson where he met the love of his life, Jennifer. Shelby and Kasey, Bill’s granddaughters were his pride and joy, and they gave him many things to brag about as they both excelled in all they did. Bill was especially happy when Shelby chose to become a Clemson Tiger like her parents, and sent Bill a “Clemson Grandpa” t-shirt that he loved to wear, especially on game day.

Not one to let grass grow under his feet, Bill became a substitute teacher in Orange County and subbed exclusively at Winter Park High School where he also became very active in the Athletic Department, and an Assistant Tennis Coach. Bill loved Winter Park and was loved dearly by his Wildcat Family and many of the students and athletes there. He brings true meaning to the saying “Once A Wildcat, Always a Wildcat!”

In 2017, Bill joined the Winter Park Elks Lodge, which was something he had always wanted to do, and spent many evenings enjoying the friendships he quickly developed with other lodge members.

2019 was a hard year for Bill, as he began having troubling health issues that doctors could not put a finger on, and on Dec. 30 while up at Mayo Clinic in Jacksonville, Bill was diagnosed with Familial ALS, as his beloved younger brother, Robby, had succumbed to ALS on Dec. 31st, 2014.

2020 was filled with ups and downs, as Bill battled ALS courageously, refusing to give in to the disease, and finally losing his battle on the evening of June 6th, 2020.

Bill is survived by his loving wife, Terri Bentley.

He is also survived by his son, Travis Bentley and his wife Jennifer; stepson, Taylor Cunningham; stepdaughter, Victoria Cunningham and granddaughters Shelby and Kasey Bentley.

Bill is survived by his mother, Ruth Glass Balogh of Lake Wales; brother Richard Keith Bentley and his wife Ginger of Avon Park; sister Claudia Bentley of Boca Grande, and many nieces and nephews. Bill was predeceased by his father William Lee Bentley, Sr. and brother Robert Glenn Bentley.

The Bentley Family would like to invite all of Bill’s family and friends to celebrate his amazing life the way Bill would want. There will be a “Celebration of Life” on Saturday, June 20 at Bill and Terri’s home in Casselberry.

The celebration will be an open house from 4 to 8 p.m. We are carefully planning the celebration to meet all social distancing guidelines so all those wishing to attend can do so comfortably. Terri and Bill’s address: 3655 W. Creeks Bend Ct., Casselberry, FL 32707

The Winter Park Elks Lodge will be honoring Bill with an Elks Rest on Sunday, June 21st at 2:00 pm. The address is 4755 Howell Branch Road, Winter Park, FL 32792 and all of Bill’s family and friends are welcome to attend the ceremony and stay after as we remember, with love, the life of Bill Bentley.

The family is asking in lieu of flowers to please make a donation to the ALS Chapter of Florida. This can be done online on their website, or send checks to ALS Association Florida Chapter, 3242 Parkside Center Circle, Tampa, FL 33619. Please make sure you note that it is in the name of Bill Bentley so the family can be notified of your donation.