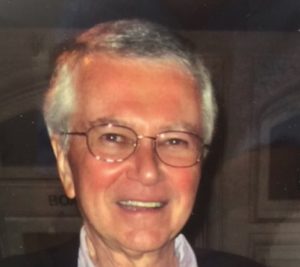 He was a graduate of the Sanford School and St. Joseph’s University in Philadelphia. He played varsity basketball while briefly attending the University of Delaware.

Bill began his career as an assistant on the corporate bond trading desk at Stone & Webster in New York and soon became a salesman, a natural for a man who loved to socialize and connect with people. In 1976 while employed at Loeb Rhoades & Co., a headhunter and friend of Bill’s, sent a young woman for a job interview on the trading desk and Bill found his way into the heart of recent UNC graduate Betsy Potter. Talking about Tarheel basketball, Bill formed an instant connection with Betsy and her friends (who he called the “Y’alls”). They married in Duke Gardens with friends and family coming from far and wide to see the confirmed bachelor tie the knot. To the day he died he described his wedding day as “the day Duke lost to Kentucky.”

An avid lover of basketball, he played every summer in the courts up the street from his family home in Pt. Pleasant Beach, N.J. He served as a beach cop many summers and listened to Frankie Valli at Jenkinson’s Pavilion. He was proud of his New Jersey roots.

Second only to basketball was his love and unfailing, though sometimes painful, devotion to the Baltimore Orioles. He and Rob made the pilgramage to Cooperstown to see his uncontested hero, Cal Ripken, inducted into the Hall of Fame. He was always looking forward to the next pennant race.

Bill and Betsy moved to Wilmington 30 years ago to raise their children, Casey and Rob. Bill, a lifelong commuter, loved chauffering Casey to kindergarten on his way to Alex Brown in Wilmington. He and Rob shared so many moments attending car and air shows and hunting in the Catskills. His children were everything to him.

Bill was not acquisitive of material things; instead he is survived by a collection of wonderful friends who he stayed in contact with until his final day.

He made us all feel special – a gentleman and a truly kind person who shall be missed.