William Charles Kunkler, Jr., beloved husband of Diane, gave up his soul to God on Sunday, August 6, 2017 after 88 extraordinary, full years. Bill’s marriage with Diane filled 61 of those years – a union 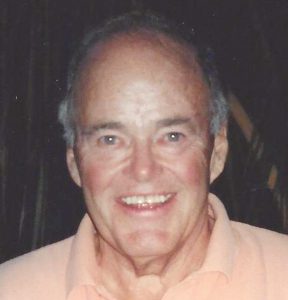 which Bill would say “got him into a lot of trouble” because he ended up with 7 favorite children, 7 favorite sons- and daughters-in-law and 22 favorite grandchildren.

Bill was born February 16, 1929 to Dr. William Charles Kunkler and Elizabeth Conlon Kunkler in Terre Haute, Indiana. He spent a year with his dearly loved parents and older sister, Katherine, in Vienna during the buildup to World War II. He returned to Terre Haute, where in his grade school at St. Joseph’s Bill first laid eyes on his true love, Diane, but also declared that his ambition in life was to be “the first American Pope.” Despite temporarily running off to the circus, Bill managed to graduate from Wiley High School and then earned his bachelor of engineering degree from Yale University in 1951. He joined General Electric in Cincinnati as a metallurgist in R&D and was involved in the early days of jet engine development. Bill and Diane were wed during this time on February 11, 1956 at St. Benedict Catholic Church in Terre Haute. They settled first in Cincinnati and then onto the Philadelphia area where Bill was with GE Missile and Ordinance Systems Department until their move to Worcester, Massachusetts in 1959 when Bill took a position with Wyman Gordon Company in R&D. It was in Worcester where Bill and Diane raised their seven children and Bill remained with Wyman Gordon ultimately achieving the position of Vice President of Corporate Development and Acquisitions and was President of several of Wyman Gordon Company subsidiaries. Bill traveled extensively during his career and played leading roles in significant projects including the forging of the nosecones of the NASA space craft which first carried men to the moon, and the sourcing and forging of titanium used for the top-secret SR-71 Blackbird project. Bill’s work at Wyman Gordon on a light, but strong wing spar helped make flight of the Boeing 747 possible.

Bill and Diane found Boca Grande in 1988. They transitioned to becoming full-time residents in 1999 where they had a joyful time together building their current home to be exactly what they intended; a place of gathering, respite, and celebration for their growing family. Bill and Diane became actively involved on Boca Grande supporting many community projects, especially through Our Lady of Mercy where among other things they were very devoted to aiding the Child Care Center. They came to realize more deeply the wonders of God’s creation through fantastic travels around the world. Their favorite adventure was to the Holy Land with fellow members of the Knights of the Holy Sepulchre.

Bill always saw himself as an overwhelmingly blessed and fortunate person. His desire to share these graces were the drivers of his constant and easy generosity. Bill fills our memories most with that joyful giving of self and resource, kindness of spirit and commitment to integrity and highest ideals. Aside from his wife and entire family, he loved his parish, Diane’s outstanding cooking, boating, golf, beach talent, ice cream and his poodles.

A funeral Mass will be celebrated on Friday August 11 at 10:30 am at Our Lady of Mercy Catholic Church in Boca Grande, FL with Interment immediately following at Gulf Pines Memorial Park in Englewood. In lieu of flowers, a wonderful way to honor Bill would be to do something for someone who is in need. Alternatively, donations may be made to Catholic Charities, Diocese of Venice.