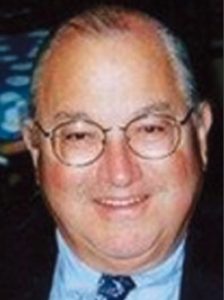 Walter William “Bill” Lathrop, Jr., a lifelong resident of Northwest Ohio, passed away April 15, 2019 at the Kingston Residence of Perrysburg at the age of 85. Bill was born on June 5, 1933 in Toledo to the late Walter William “Dutch” Sr. and Cornelia Kelsey (Coley) Lathrop. He attended Ottawa Hills Elementary School and the Groton School in Massachusetts. Bill graduated from Cornell University with a master’s degree in civil engineering. Following graduation, he began work at his family’s general contracting business, the Lathrop Company. Bill worked for the Lathrop Company until it was sold in 1986. During his tenure, the Lathrop Company was recognized nationally as a Top 100 construction company. He represented the Lathrop Company by selling the company’s services and bidding contracts throughout the country. Some of his favorite projects included building regional shopping malls from New England to Florida to New Mexico, many hospitals in the Eastern U.S. and the first Japanese auto plant in the U.S. for Honda. He was well respected personally and professionally for his intelligence and wealth of knowledge on many different topics.

Beyond the family business, Bill was involved in many trade organizations that supported both the construction industry and the laborers who worked in it. Bill was instrumental in setting up trade schools nationwide to ensure proper training and education for laborers. He was also a level-headed labor negotiator who personally oversaw the settlement of 16 union contracts. He served on the board of many union pension funds, overseeing the investment and growth of these funds for the benefit of the union members.

After selling the construction company, Bill focused on real estate development throughout Northwest Ohio as president of The W. W. Lathrop Company. He was a founding member of Tomahawk Development Company, which was a driving force behind the development of Arrowhead Park in Maumee.

Bill was active with many professional and philanthropic organizations. He was a Life Director of the Associated General Contractors of America, member of the Consulting Constructors Council and fellow of the American Institute of Constructors. He proudly served for years on the board of the Ohio Carpenters Pension Fund and the Ohio Laborers Pension Fund, and was a longtime board member of the Boys and Girls Club of Toledo and the Girl Scouts Council of N.W. Ohio, where he was one of the first male board members.

Bill’s work, both professionally and for trade organizations, involved travel that instilled in him a love of exploring the country and the world. Bill and his wife, Anne, traveled throughout the U.S. and abroad, creating many wonderful memories. His most memorable trip was an African safari with his entire family which covered the countries of Kenya, Uganda, Rwanda, Zaire, Namibia and South Africa and included three hikes up a volcano to visit Dian Fossey’s mountain gorillas. He also enjoyed the more than 30 years at the family winter home in Boca Grande, Fla. He loved to entertain, had an appreciation for fine food and was an amazing cook. Bill was an avid duck hunter and was passionate about local history. He was proud of the role his family played in local history and enjoyed pointing out the many “Lathrop-built” buildings in Northwest Ohio. His wife and family always came first, and he will be lovingly remembered for his profound humility, selflessness, kindness and supportive ways.